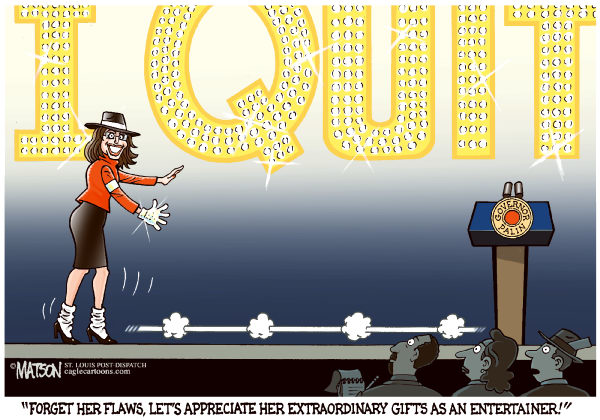 A new report raises questions about one of soon-to-be-former Alaska Governor Sarah Palin’s stated reasons for her stunning announcement that she plans to resign before completing her first term — but a new poll shows that the bulk of Republicans love her, resignation or no resignation.

Which raises a tantalizing question: if the reading on this new poll and previous polls hold up, it means Palin is a Republican loved by her own party but increasingly rejected by Democrats and independent voters — so if the GOP nominates her in 2012 will the party be in-effect drinking talk show political culture political Kool Aid?

One of the chief reasons Sarah Palin has given for resigning as Governor of Alaska is that her state’s taxpayers are being forced to spend money defending her government against ethics complaints that would otherwise fund teachers, cops, and road repair.

But in response to our questions, a spokesperson for the Alaska governor’s office just gave us new information that casts serious doubt on this assertion. The revelation makes the resignation episode even stranger, and raises fresh questions about the real reasons for her abrupt departure.

We have noted in an earlier post that Palin’s leaving doesn’t mean she will be vetted less; she will likely be vetted more since many in the new and old media will not take her word for any assertions. AND:

During her resignation speech last week, Palin presented herself as a heroic defender of the taxpayer. She said that money being spent on government lawyers to defend against these “frivolous ethics violations” could be “going to things that are very important, like troopers and roads and teachers and fish research.” Palin repeated exactly the same point this week.

But David Murrow, a spokesperson for the Governor, said in an interview that much of this money was budgeted to the lawyers in advance and would have gone to them anyway, even if state lawyers hadn’t been defending against these ethics complaints.

In response to our questions, the Governor’s office provided us with a detailed breakdown of the millions Palin has claimed has gone to defending against ethics complaints. It does list roughly $1.9 million in expenditures.

But Murrow, the spokesperson, acknowledged to our reporter, Amanda Erickson, that this total was arrived at by adding up attorney hours spent on fending off complaints — based on the fixed salaries of lawyers in the governor’s office and the Department of Law. The money would have gone to the lawyers no matter what they were doing. The complaints are “just distracting them from other duties,” Murrow said.

In other words, while these lawyers might have been free to do other legal work for the state, the ethics complaints have apparently not had the real world impact Palin has claimed, and didn’t drain money away from cops, teachers, roads and other things.
Sargent has some info on some other contradictions as well.

Every sentence our of her mouth is a verifiable lie, an exaggeration, or wrong. In order to catch Sarah Palin lying, all you need to do is record anything that comes out of her mouth. This is, after all, the candidate who lied about the Bridge to Nowhere for months after it was proven she was full of it.

I suppose it is nice to have this documented for Sullivan’s list, but it is hardly a big find. Of course she was lying.

Cole is referring to this (increasingly long) list kept by Andrew Sullivan. (Book mark the URL because the list will likely get a tad longer over the next few months and years…)

But will any of this matter to what will really matter to Palin should she decide to seek the 2012 GOP Presidential nomination? Not much, if the latest USA TODAY/Gallup Poll holds firm: it shows that 7 out of 10 Republicans would vote for Palin if she runs:

Sarah Palin’s bombshell that she is resigning as Alaska governor actually has boosted her a bit among Republicans, a nationwide USA TODAY/Gallup Poll finds, though it also has dented her standing among Democrats and independents.

Two-thirds of Republicans want Palin, the party’s vice presidential nominee in 2008, to be “a major national political figure” in the future. Three-fourths of Democrats hope she won’t be.

Independents by 55%-34% would prefer she leave the national stage.

The findings underscore how polarized opinions of Palin were even before Friday’s surprise announcement. Seven in 10 polled say their views weren’t affected by her decision. Among those whose opinions shifted, Democrats by a 4-1 ratio and independents by 2-to-1 view her less favorably. Republicans are somewhat inclined to see her more favorably.

So if Palin does run, she will be running as a candidate who appeals mostly to her own conservative Republican choir (some moderate Republicans are not among her fans) which is fine is she’s running for President of…..her own Republican conservative choir.

In other words: the GOP may face a dilemma in 2012 if she rises to the surface by nominating a candidate who’s the darling of conservatives and the talk radio political culture but someone who will cause other non-GOP voters to either stay home on Election Day or vote Democratic.

Since her surprise announcement that she wasn’t going to serve out her full term, talk radio has been in overdrive, although not all hosts have been on the same page. Sean Hannity is (what else?) defending her and rationalizing it. Michael Medved said Palin is correct to feel that she has been battered by the media but that her decision is not a good one since it gives her the image of a quitter. In general, many conservative talkers have said…it is a smart move…she is now free to become a national figure…Barack Obama also didn’t serve out his full term…She has as much experience as Barack Obama.

Basically, most conservative talkers and many conservative callers on talk radio have rejected that her decision to quit makes her a quitter.

But columnist/blogger Dick Polman says, if you strip it all away, Palin’s decision was a poor one and she has the image of…a quitter. Some excerpts:

Actually, she’s not a fighter. She’s a quitter. And Americans don’t like quitters. As Vince Lombardi used to say, “Winners never quit, and quitters never win,” and we all know what Americans think of Vince Lombardi. (What other iconic footballer has a New Jersey Turnpike rest stop named after him?)

Back at the GOP convention 10 months ago, Palin stressed the importance of being an elected executive: “I guess a small-town mayor is sort of like a community organizer, except that you have actual responsibilities.” How’s it going to play, with many Republicans, now that she has walked away from her “actual responsibilities?”

Polman’s point is well taken, as is what is happening. You won’t hear many conservative talkers play that quote anymore, because it can now apply to her. When it didn’t, it was run so often you’d swear there was a tape loop. MORE:

All she says for sure is that being governor wasn’t fun anymore, especially with so many people (including Alaskan Republican lawmakers) saying such mean things about her, and filing (in her words) “ridiculous, frivolous, wasteful” ethics complaints against her. Plus, during this sour economic climate, Alaska faces some of the same tough budget choices bedeviling other states – and that wouldn’t be fun to manage, either. So she simply quit, with a year and a half remaining in her first and only term.

What interests me most is how her cut-and-run decision will play out within the framework of a 2012 Republican primary season, assuming that she joins the fray.

Is it conceivable to believe that her rivals will give her a pass on quitting in the middle of a fight, on leaving her home-state constituents in the lurch? Hardly. For at least three candidates in the GOP field – Mitt Romney, Mike Huckabee, and Tim Pawlenty – Palin’s decision to quit is potentially a weapon they can use against her.

Prediction: the new poll means that her rivals will work even harder to undermine her. This could come in various ways: authentic zingers, more subtle digs and the leaking of unflattering anecdotes or info to the mainstream media or friendly bloggers (her rivals know that many Republicans will assume the info came from Democrats, even from the Obama White House). Look for one of her foes to do a commercial using her convention assertion coupled with a clip of her resignation speech. Polman again:

Americans love a fighter; the basic template for a politician was established 99 years ago by Theodore Roosevelt, who praised the man in the arena “whose face is marred by dust and sweat and blood, who strives valiantly; who errs, who comes short again and again, because there is no effort without error and shortcoming; but who does actually strive to do the deeds…and who, at the worst, if he fails, at least fails while daring greatly…” There was nothing in that speech about quitting when the going got tough.

Palin said Friday that she didn’t want “to just hunker down (in the job) and go with the flow. Nah, only dead fish go with the flow.” But, if we assume she still has an interest in 2012, she might have just made it easier for her rivals to hook her.

Still, first they’d have to bait her. But if you consider the seemingly impulsive reactions of Palin and her penchant for making assertions that are seemingly sometimes at variance with the facts, that shouldn’t be hard for her Republican rivals (or the Democrats) to do.

FOOTNOTE: A sign of her new image and political vulnerability is the fact that late night comedian David Letterman, who apologized for inappropriate remarks about Palin’s daughter, is now firmly back to skewering her again. Here’s his full-speed-ahead-take on her resignation.

The cartoon by RJ Matson, The St. Louis Post Dispatch, is copyrighted and licensed to run on TMV. All Rights Reserved. Unauthorized reproduction prohibited.