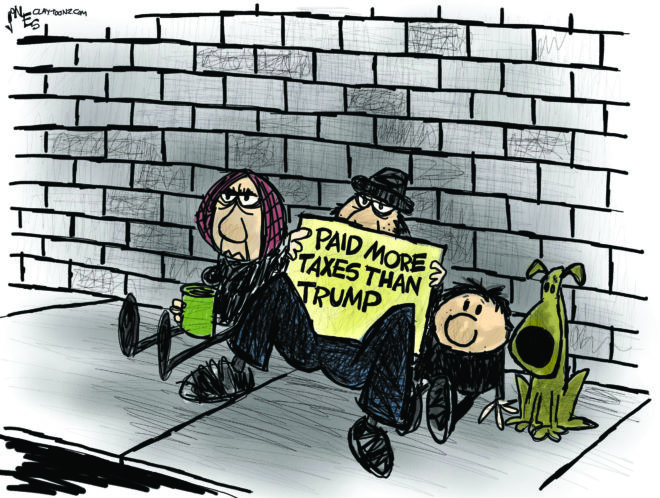 Raise your hand if you paid more in taxes than Donald Trump. Everybody?

The New York Times has published an investigation that finally gives us a clear look at Donald Trump’s taxes.

The weirdest thing about Donald Trump is that he’s president without disclosing his taxes or selling off his businesses. Basically, we have to trust the most dishonest grifting grifter that he’s not influenced by conflicts of interest. As it turns out, he is.

Donald Trump said he wouldn’t open up any new businesses overseas, but he’s still collecting money from foreign companies and governments. Lobbyists, diplomats, and others with special interests stay at his hotels and join his shitty golf resorts.

Donald Trump says he’s a great businessman…who loses money every year. Every year. He claims he’s worth $10 billion but looking at what the Times presents, he’s not even close.

The reveal doesn’t show any debt to Russia, but it shows massive massive on top of massive loans to…we don’t know.

Looking at his taxes over the past 15 years, he usually doesn’t pay and when he has, the most has been $750. How much did you pay last year? Can you vote for Donald Trump knowing you paid more in taxes than he did? Donald Trump has bragged that not paying taxes makes him smart. What does that make you?

Other juicy details of the report is that Donald Trump pays more taxes in places like the Philippines and Turkey than he does in the United States. Think about this: When he brags about increasing money for our military, it’s not any of his money going towards that. It’s yours.

When he brags about donating his salary back to the government, that’s your money paying that salary, not his. When he signs a relief bill so you can pay your rent during the pandemic, and then puts his stupid name on the check, that’s your money…not his. Your taxes paid for that. His did not.

And right now, this fat cat who doesn’t pay any taxes but grifts off yours, doesn’t want to give you another stimulus and is trying to take away your healthcare.

And, Donald Trump really is under audit. The issue is a $72 million refund he received from the government. You know who paid Donald Trump that refund? You did. Donald Trump played a shell game with his taxes, removed himself from his Atlantic City casinos, got a refund for it, but still has a stake in the new company which is paying him. That is where he may have broken the law (there are other parts where he may have also). Donald Trump is facing a fine that may be over $100 million. This billionaire probably doesn’t have it.

Also, those massive loans are coming due over the next few years. If he’s in White House at that time, what will he do to pay off those loans? Will banks foreclose on a president? That’s a huge conflict of interest.

When you read this story, the only three things (out of 500 businesses) that have made money for Trump is commercial space in Trump Tower, selling the rights to put his name on buildings he doesn’t own, and the Apprentice. And he doesn’t have one of those anymore (other than TV royalties). Everything else, from his golf resorts to his hotels, are all losing money. It’s probably why he wants to host summits and golf tournaments at them. It’s probably why he wants to ignore science to reopen the nation, as his businesses are losing millions. It’s why he charges the government every time he goes to one of his resorts which is why he goes to his resorts every chance he gets.

The main selling point for Trump to the rubes is that he’s a billionaire and a great businessman. His supporters believe he’ll do for the nation, and for them, what he’s done for himself. But all Donald Trump has ever done has been to take care of himself. Even before he was president, he was riding on the backs of taxpayers to take care of himself. He was profiting off the American taxpayer for decades. Now, he’s in control of the government to support his businesses.

The rubes and hillbillies are going to have to believe this is all a lie. Rick Santorum was doing just that this morning on CNN. He’s a great businessman who loses billions and gets $75, 000 haircuts and pays consulting fees to his daughter who’s on his staff. Yeah…what a selling point.

The haircuts also prove Donald Trump isn’t as smart as he claims. $75,000 for hair that looks like that? And we paid for that?

With Donald Trump, we’re not getting our moneys worth.

Donald Trump is claiming the Times story is “fake news.” His campaign, White House, and stupid kids are yelling for the Times to release the documents (which they say they can’t because it’ll reveal the sources who provided them). But there’s another way Donald Trump can clear this up.

He can release his taxes.

Now raise your hands if you’re OK with paying more taxes than Donald Trump. Nobody?