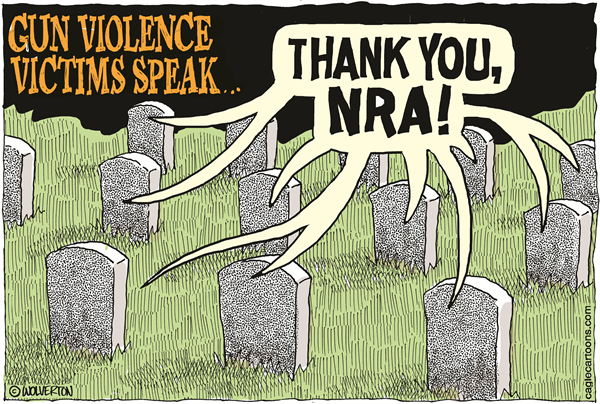 As we in Boulder try to recover from the King Soopers mass shooting, many are asking “why it is so hard to pass gun control legislation in our country?” 90% of Americans want it, including 74% of NRA members, but Congress remains paralyzed. Why is this??

The answer seems clear. One root is the power of right wing billionaires and arms manufacturers, whose financial has a huge impact on the decisions of our congressional leaders. They have financed the NRA and made sure that SCOTUS is packed with right wing ideologues.

They and their congressional allies believe that such mass casualties are “the price of freedom.” (O’Reilly in 2017 after Las Vegas). In the first place, the right to Freedom in not unlimited. I am not free to stick my knife in your chest. Anti maskers are not “free” to decide to help the spread of covid. (They think they are, having been brainwashed by right wing media/tweets). Ideology is part of the problem.

Another in that jurists who have this ideology led to SCOTUS, flying in the face of years of court decisions, holding that the second amendment protects an individual’s right to ‘bear arms’. Baloney. The Second Amendment to the Constitution is: “A well regulated militia, being necessary for the security of a free state, the right of the people to keep and bear arms, shall not be infringed.” Our founders did not elaborate. but in the 1700’s to “bear arms” meant to be part of an organized militia. A Tennessee court ruling in 1840 held that using a gun your entire life did not constitute ‘bearing arms’, which applies to militias only.

Until 1959, all legal opinions on the Second Amendment held that it’s intention was not to guarantee an individual’s the right to own a gun. Alas by the1970s, legal scholars, funded by the NRA, began to argue that the Second Amendment did apply to individuals. The right wing ideology won, thanks to massive funding by special interests.

The NRA is a major reason why gun control will not happen. Originally, it was established (1871) as an organization to benefit hunters and other marksmen. In 1925 an NRA secretary took money from arms manufacturers. He was fired for this and sued by the NRA. In 1931 the NRA backed limits to concealed weapons and supported background checks. It supported gun controls acts in 1934 and 1968. Buti In the mid 1970’s this changed. They began to focus on “gun rights”. They became part of the Republican/billionaire financed shift to an anti-regulation and anti-welfare stance The constant emphasis on the danger of ‘socialism’ became the right wing drumbeat.

They label all programs designed to protect citizens and their environment as ‘socialism’. So no to environmental regulations, worker safety regulations, Medicare, social security and other ‘socialist’ programs. (By socialism they seem to mean anything that impedes their ability to make piles of money. Very simpleminded .) But it has won the day, and the Republican Party has changed dramatically from its former self. (I remember under Eisenhower an advertisisng campaign by the government. Cartoons accompanied the song “make friend wit all your neghbrs pitch in a little ore

The Republican platform in 1980 opposed gun regulation and the NRA endorsed Reagan. The power of the NRA over politicians became part of our political reality. After Reasan was shot, Athe Brady Bill passed (1993). The NRA funded lawsuits in nine states to strike it down. Although until 1959, every single legal article on the Second Amendment concluded that it was not intended to guarantee individuals the right to own a gun, in the 1970s, legal scholars funded by the NRA had begun to argue that the Second Amendment did exactly that.

The NRA, funded lavishly by arms manufacturers, became on of the 3 most powerful lobbies in DC. It spent 40 million on the 2008 election. And right wing justices led the Spureme Court to nullif gun regulations and declare that the 2nd amendmena protects and individual’s right to be armed (to the teeth if need be).

The unfettered right to own and carry weapons has come to symbolize the Republican Party’s ideology of individual liberty, misconstrued as the right to do whatever you want. A simplistic and false view. Your freedom does not extend to harming others. But this shallow interpretation very much suits the billionaire/corporate Republican overlords.