The emergency lights are now flashing in many Jewish synagogues, homes and among many Jews in America.

At a time when antisemitism is rising in the world and in the United States, the most recent horrific event, a string of stabbings during a Hanukkah celebration at a rabbi’s Monsey, New York, is part of a larger pattern of attacks on Orthodox Jews. Orthodox Jews are more easily recognizable by the way they dress. But as anyone who is Jewish will note: an antisemitic attack or action against any Jew is an alarm bell for all Jews. Particularly if it becomes part of a pattern.

Details of the latest attack:

An intruder with a large knife burst into the home of a Hasidic rabbi in a New York suburb on Saturday night, stabbing and wounding five people just as they were gathering to light candles for Hanukkah, officials and a witness said.

It was a terrifying scene, the officials and witness reported, saying that the violence occurred at about 10 p.m. as numerous people were celebrating Hanukkah at the home of the rabbi, Chaim Rottenberg, in Monsey, which is in an area with a large population of ultra-Orthodox Jews.

The New York Police Department said a suspect had been arrested in Harlem and was turned over to the authorities in Rockland County, which is northwest of New York City and where the attack took place. The suspect, Grafton Thomas, 38, who is from Greenwood Lake, N.Y., near Monsey, is facing five counts of attempted murder and one count of first degree burglary. Two of the victims remained in the hospital as of Sunday morning, the police said. One victim is in critical condition with a skull fracture, according to the authorities.

A law enforcement official said that Mr. Thomas’s vehicle was tracked to Harlem with the help of license plate readers. The patrol officers who confronted and detained Mr. Thomas found him “covered with blood,” said the official who requested anonymity because the investigation was ongoing. 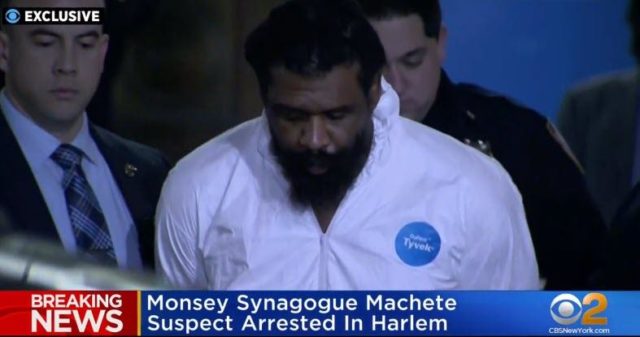 Many Jews have blamed Donald Trump for the rise of antisemitism in the United States. Today, evangelist and Trump supporter Franklin Graham suggested that “hatred for Trump” and “a lot of people in the media” are to blame for the mass stabbing.

A piece by Batya Ungar-Sargon, The Forward’s opinion editor, sees what is going on as something far deeper and not ideology driven and is akin to the “bad days”

..of murdering Crusaders and marauding Cossacks, the bad days of pogroms, the bad days spent starving in ghettos and concentration camps. Wherever they were, Jews lit candles and sang this song, waiting, waiting for salvation. How fortunate are we to live in a time without such fear, I would think, tears creeping into my eyes and the words catching in my throat.

The bad days are back.

And the bad days are targeting Orthodox Jews:

Orthodox Jews are living through a new age of pogroms. This week, as we celebrated the Festival of Lights, there were no fewer than 10 anti-Semitic attacks in the New York area alone: A 65-year-old man in Manhattan punched as the assailant yelled “Fuck you, Jews.” A 67-year-old man and his 6-year-old son attacked by a group of teenagers in Brooklyn. Three women slapped in the face by a woman who confessed it was, simply, because they were Jews.

And last night, on the seventh night of Hanukkah, a man wielding a machete the size of a broom charged into a Hanukkah celebration in a rabbi’s house in the ultra-Orthodox enclave of Monsey and stabbed five people, two of them critically.

But this is not some Hanukkah fluke. Just a few weeks ago, a kosher supermarket in Jersey City was shot up by extremists, three people killed in cold blood. The target, Jersey City’s mayor said, was a school upstairs, where 50 Hasidic children were hiding under tables, terrified as the shots went on for hours.

That supermarket shooting also didn’t come out of nowhere. For those paying attention – not enough people, sadly – these attacks are part of what has been an increasingly frequent series of violent outbursts targeting Orthodox Jews in Brooklyn over the past two years.

A man whacked across the face with a brick, losing all his teeth. A woman’s wig torn off her head. A mother beaten with her child in tow. Eggs thrown at another woman and her little boy.

Almost as horrifying as the attacks themselves is the seeming inability of those whose job it is to protect the vulnerable to figure out what is causing them, or how to stop it from happening over and over.

After the massacre at a Pittsburgh synagogue on Shabbat that killed 11 people last year, and another fatal shooting at a shul in Poway, California six months later, one often heard that the great threat to Jews – even the only threat – comes from white supremacy. Conventional wisdom said it was the political right, and the right’s avatar in the White House, that was to blame for the rising levels of hate against Jews.

But the majority of the perpetrators of the Brooklyn attacks, and the suspects in Jersey City — who were killed in a shootout with the police — and now Monsey, were not white, leaving many at a loss about how to explain it or even talk about it. There is little evidence that these attacks are ideologically motivated, at least in terms of the ideologies of hate we are most familiar with.

She notes that “the return of pogroms to Jewish life on American soil transcends ideology.” The Brooklyn attacker doesn’t appear to be a Trump supporter, she writes, but Trump deals in conspiracy theories “and antisemitism often manifests as a conspiracy theory about secretive Jewish power. But conspiracy theories flourish on the left as well in today’s day and age.”

Go to the link to read the entire article.

Can you really call this a pogrom? Some will debate it but what is a fact is this: there were attacks on Jewish New Yorkers on almost every day last week.

Another day, another anti-Semitic attack. I wish I could say I was sad and heart-broken instead of tired and angry. This is what happens you make #Antisemitism into a political football and whip up one of humanity's most ancient hatreds.

After a week of anti-Semitic attacks, it’s worth noting that violent hate crimes are at a 16-year high in the U.S.

This statistic is also underreported. Amazingly, no hate crimes were reported by any law enforcement agency in Alabama or Wyoming. https://t.co/VXJJSuyjaV

Antisemitism & hate have no place anywhere in our world and we must continue to stand together against them. Last night’s attack on Jews celebrating Hanukkah in New York is a sad reminder of the rising numbers of such heinous acts. We must all come together to end them.

Sickened by the anti-Semitic graffiti on walls all over Hampstead and Belsize Park this morning. All decent people across Britain stand with our Jewish community – and we must move heaven and earth to eradicate this racist hatred, which was unimaginable just a few years ago. pic.twitter.com/Pfr8ZBIJax

I've gotten DMs from Jews here in New York worried about wearing Jewish symbols or yarmulkes on the street. I can't make such a deeply personal decision for you. All I can say is I've worn my yarmulke on the streets of Hungary and I'm not about to stop on the streets of my home.

There have been NINE anti-Semitic attacks in NYC in the past week.

And now this horror tonight just outside the city, in Monsey.

This is a full blown crisis. None of what we are doing is good enough.https://t.co/VXFnUSW694

An ongoing nightmare in the New York metropolitan area as visible Jews are targeted for attack, again and again, over Hannukah. My god. https://t.co/g92KlgzZSf

An Iowa woman ran over a girl b/c she “looked Mexican”.

A man hunted Hispanics in a Texas Walmart.

Trans women of color are assaulted or killed weekly.

We must denounce division, racism, discrimination every time we see it.