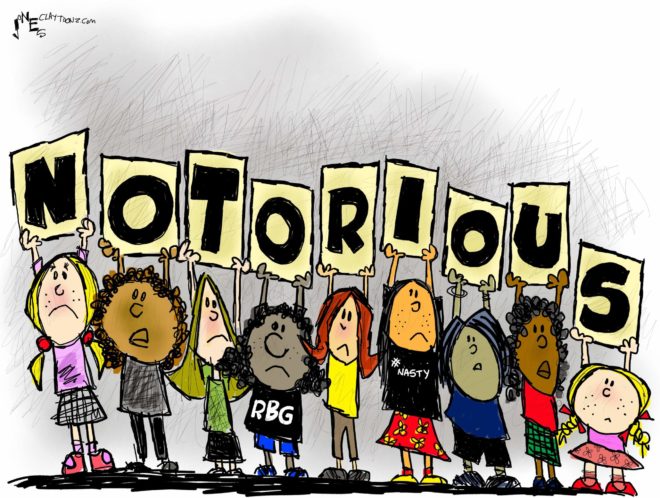 In 2016, Senate Majority Leader Mitch McConnell, said, “The American people should have a voice in the selection of their next Supreme Court Justice. Therefore, this vacancy should not be filled until we have a new president.”

McConnell was talking about the vacancy created by the death of Justice Antonin Scalia. There were nine months to go before the next election, but damned if he was going to do his constitutional duty and vote on the the president’s SCOTUS nominee. He didn’t even give Merrick Garland, the nominee, a hearing.

Now, with the passing of Justice Ruth Bader Ginsburg and with a mere 45 days until the next election, McConnell is determined to hold a vote for Donald Trump’s nominee.

The American people did have a voice in Scalia’s replacement as they elected President Obama for eight full years, not seven years and one month. In fact, President Obama won the popular vote both times. When McConnell stole that nomination from President Obama, he gave it to a man the majority of the nation rejected.

Now, McConnell’s argument to vote on RBG’s replacement is that the American public elected Trump and his agenda (like they did for Obama…but they didn’t actually for Trump), and then they not only kept Republicans in charge of the Senate in 2018, they also increased their majority.

The thing is though, the American people wanted Democrats to control the Senate. Democratic senate candidates received 12 million more votes than Republican senate candidates. Unfortunately, we allot two senators per state. That means 40 million Californians only have two U.S. senators, while 40 million other Americans (from 22 states) have 44 senators. Fair? No, which brings us back to McConnell, that lying, sleazy, squirmy, wormy Moscow sonofabitch.

McConnell doesn’t care if he’s a hypocrite. He doesn’t care that he fails to meet his own requirement as the American people rejected Trump in 2016 and 2018. They’ll reject him again in 2020. In the past four years, two justices were placed on the court the majority of the nation didn’t want.

McConnell says the American people should have a voice in the next selection. Then do it. Use your voice. Shout that worm down.

I am a hard core radical when it comes to Trump’s court nominees. Since Donald Trump wasn’t elected and was aided by a foreign nation…and helped during this election, which he asked for because he’s a criminal…then I believe every single one of his nominees should be tossed, impeached, removed, sent home, cut off, no pensions, unemployable, set adrift on a raft to find an island somewhere…just get out of here. Hey, it’s not like I’m suggesting we set them on fire.

God speed, RBG. She served her nation well and in a historic fashion. Just like the stellar Thurgood Marshall was replaced with a wingnut like Clarence Thomas, who didn’t deserve to stand in Marshall’s shadow less enough take his seat, I’m certain Donald Trump and McConnell will replace RBG with a nut of their one who pales in comparison.

Can the GOP replace RBG before the election? Doubtful. But they can do it before Joe Biden is sworn in.

When Republicans stole the nomination from President Obama, they dared us to hold them to their word. Now, they’re all like, “word?”.

If you’re down and depressed over this, I can’t make you feel better; I am distraught, too. The weasels are having their way over the will of the rest of the nation.