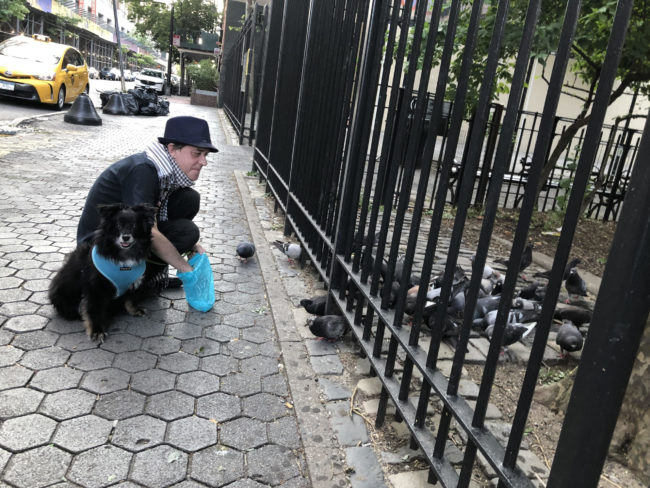 If you’re of a certain age you may be familiar with the works of Tom Lehrer. He was (is, actually, he’s about 200 years old now) a mathematics professor at Harvard who in his spare time wrote comedy songs with his piano.

His songs were controversial at the time, the 1960s, and even banned in some places. They cover cold war politics, nuclear annihilation, sexually transmitted diseases (!), the Oedipus complex, math and the general absurdities of mid-century American life.

An hour wasted listening to one of his concerts or records is one you’ll never get back but you’ll be much happier for it. Try Copenhagen, 1969.

His most famous song is “Poisoning Pigeons in the Park” which is why, feeding some pigeons (but not poisoning I hasten to say) in a park near my home in Manhattan I was reminded of him.

This all came about unexpectedly. When the hammer came down in NYC in March; stay at home, social distance, looting, marches, rinse, repeat, etc, and I was unable to go anywhere I was worried about the birds I see from my balcony. So I bought some bird seed and a little plastic feeder. No birds visited “Eat at David’s” balcony restaurant: they couldn’t read the sign I guess.

If you’ve ever been near the internet and alcohol at the same time you might have had the experience of accidentally ordering more than what you had intended to. Grunting, the delivery guys brought in my drunkenly acquired birdseed stockpile. So I was left with a large sack of seed and nothing to do with it. Always a problem.

Taking my dog out I brought a handful of feed for the pigeons on our walk and they liked it – and I liked it. So for three months every day he and I walk one block to the park: a few of the smarter pigeons even flock down to meet us in advance of my getting close, but when I whistle and he – my Toy Australian Shepherd dog named “Aussie” (get it?) starts barking there’s a “bird-nado” twisting down from the trees to greet us. The humans are often taken aback by a swarm of birds circling that good looking chap in the fedora with his crazily barking dog. “WTF?” – poor fellow New Yorkers think – they’ve had enough mad shocks lately, but generally they just laugh.

Then many more flutter down and “Aussie” stands guard like a stoic Secret Service agent, alert so as to not let the pigeons get too close to his Dad, snapping at them to watch their place. Remember, to a 20 pound dog a pigeon is the size of an emu and one went for him once. I’m not sure he understands what we’re doing but that doesn’t matter to him: he’s with his Dad, we’re a pack and we’re doing something where he helps. Dogs so love a job.

Maybe 2-4 dozen pigeons are my regular audience. There are lots of sparrows also who get bullied by the pigeons, typical New Yorkers, but a little bird told me: “SPARROW LIVES MATTER” so I make sure they get enough because I’ll have no pigeon privilege at my concert thank you very much.

Pigeons must be New York City’s “bird of record” and I heard one was even elected mayor in the 1970s.

In this weird, sad and sometimes nasty “Covidicine” we should take happiness where we can find it. And the hobby is cheap (cheep!) as chicken-feed: pardon the puns. I feel like Paul McCartney at Shea Stadium 1966 I’m so popular with these lovely little creatures, cooing and jumping about.

This new hobby has given me an appreciation of the aerospace dimension far above the human, dog, and fire hydrant level I’m accustomed to.

For instance, I’m lucky to have a balcony with a good view of west Manhattan, north to south, and I now notice in the early morning there are seagulls! And the other day some ravens. Like crows apparently they are the smartest birds and are even smarter than many mammals and nearly all Republicans.

Yesterday I saw a bunch of them flying south towards the Financial District presumably to get in on some real estate scam or stock swindle: they’re that smart.

Seriously though, they use tools, solve puzzles, can recognize individual humans and they even hold funerals for their own. A group (a “murder” of crows or ravens is the technical collective noun) sit along a tree with their decedent friend on the ground, they caw for a while and all fly off simultaneously. I’ve never witnessed such a funeral myself but it’s hard to imagine anything more hauntingly beautiful, isn’t it?

Feeding birds in the park is a clichéd “old guy hobby” and I have the thinning hair, fedora and gravitas to pull it off – I like to think – but a surprise is its effectiveness in meeting chicks of the human variety. All manner of young ladies routinely stop, admire, engage me in conversation, flirt and otherwise improve my lonely, covid mood. One took the enclosed photo.

“Sooo…” in the words of the great Tom Lehrer: “….if Sunday you’re free why don’t you come with me and we’ll poison the pigeons in the park.”