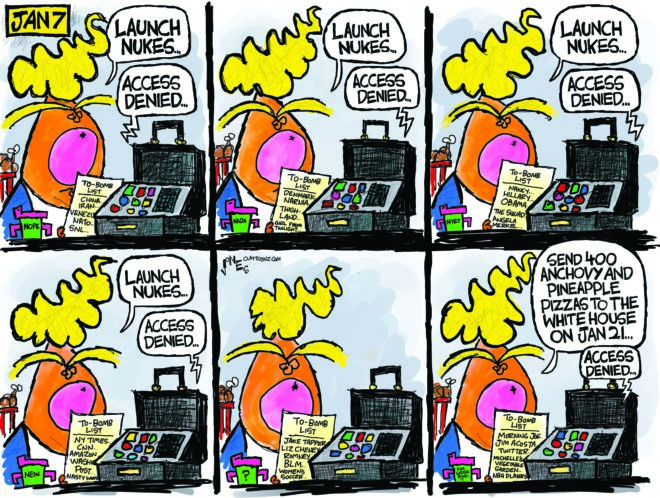 Next time you hear some MAGA lunatic claim President Biden has dementia or lost his mind, can’t tell his sister and wife apart, occasionally thinks Vice-President Harris is the president, can’t open doors, is handled, controlled, or likes ice cream too much (I still don’t get how liking ice cream is a sign of mental decline, but I guess you gotta create something out of nothing), or better yet…the next time a United States Senator pushes a conspiracy theory there’s a mute button to silence the president…just remember, nobody has taken the nuclear codes away from President Biden.

Do you know why nobody has taken away our president’s access to the nuclear codes? Because he’s not fucking crazy. Also, he hasn’t already tried to destroy our democracy, overturn an election he lost, or remain in power and becoming a fascist dictator through a coup…but yeah…let’s worry about Joe Biden’s mental state because he likes ice cream. Is it the brain freezes you’re worried about? Is there an antifa flavor?

Those are the reasons why General Mark Milley, the chairman of the Joint Chiefs of Staff, worked to prevent Donald Trump from launching nuclear weapons out of his frustration from losing and failing to overturn the election. This is exactly what Milley did, according to a new book by Washington Post associate editor Bob Woodward and national political reporter Robert Costa.

According to the report, Milley called his Chinese counterpart, General Li Zuocheng of the People’s Liberation Army, that all was well and under control and that sometimes, democracy is just sloppy. He made the call from a burning building. Milley actually called the Chinese general twice to lie his balls off. “Nay, no worries, General. He just needs a good poop and all order will be restored. He’s just grouchy for nap time.” It doesn’t sound like the General Zuocheng was buying it. Milley also told him that he’d give him a heads up before the nukes hit Beijing, which I assume was supposed to be reassuring.

Republicans are really upset over this. They feel it was unconstitutional, insubordination, treason, and an incursion into the president’s (sic) authority. They’re screaming, “How could Milley do this?” I’ll tell you how.

Donald Trump had spent four years being a lunatic. OK, four years as president (sic) being a lunatic. The entirety of his life before that as a lunatic is inconsequential to this discussion. How could General Milley overstep his bounds and take the nuclear football away from Trump and replace it with an Etch-a-Sketch? Because Donald Trump had the delusion he won an election he lost. That is insane right there. He tried to overturn the election by calling officials in several states he lost, using conspiracy theories and rancid bullshit to try to convince them to overturn their elections. He called on his white supremacist disciples to stage an insurrection at the Capitol and stop the certification of the election. During the insurrection, he refused for hours to call off the MAGA rioters.

Also, “Woman, man, person, camera, TV” should have been enough to have the Trump cabinet exercise the 25th Amendment.

So, if you’re a person who had no problems with Trump’s lies, trying to overturn an election, claiming he won an election he lost, tried to remain in power through a coup, and refused to call it off, then we don’t need to hear your opinions about what General Milley did. You are disqualified.

If you were mum about “woman, man, person, camera, TV,” then you are disqualified from speculating about President Biden’s mental health. By the way, it’s fine.

If you were OK with Donald Trump winning an election with Vladimir Putin’s help, asking for Putin’s help to win the election (Russia, if you’re listening), entertaining Russians at his campaign HQ in Trump Tower on 5th Avenue because they promised dirt on your political opponent, or that crazy time when he stood next to Putin and took his lies over our national intelligence experts, then you’re disqualified from accusing General Milley of Treason.

If you were OK with Donald Trump giving out national security secrets to Russians he was entertaining in the Oval Office, or that time he tweeted classified information, or that other time, or the other time, etc, etc, etc…then you are disqualified from accusing anyone of treason.

If you were OK with Donald Trump upholding foreign aid in an extortion attempt until the president of Ukraine gave him dirt on Joe Biden, then you are disqualified from accusing anyone of treason.

If you don’t know the meaning of treason, yet continue to fling it about, then you are disqualified from accusing anyone of treason.

If you remained warm and squishy inside for all things Trump while he allowed Mar-a-Lago country club members to pose for photos with the nuclear football, shut the fuck up about everything.

Donald Trump should never have had any access to the nuclear codes….ever. He never should have had the authority to call in airstrikes. Sure, he was “elected” president (sic) and allowed to live in the White House (which I hear is still undergoing a defunking), but this is Donald Trump. This is the guy who thinks we have invisible airplanes. Exceptions should be made for a guy like Trump.

Just from looking at Donald Trump’s hair and face, and knowing he chooses to do that and it wasn’t a kitchen accident involving an air fryer and mangos, I wouldn’t let the guy choose a cable plan. Nobody wants Starz. I wouldn’t allow him to order from a menu for himself. No, you can’t have the lobster. You’ll have the chicken fingers, apple slices, cheese string with a juice box and you’ll like it. Now shut up and finish coloring on the placemat. No, that doesn’t look like a puppy. You suck at everything.

Talk to me about President Biden’s mental condition when he tries to buy Greenland, or stares into an eclipse, or throws paper towels at hurricane survivors, or tries to build a wall along the southern border, or claims Mexico will pay for that wall, or says women should be punished for getting abortions, or claims global warming is a Chinese hoax, or talks about dating his daughter, refer to 9/11 as 7/11, or talk about falling in love with Kim Jong Un and other dictators, or talk about ingesting bleach to kill covid, or tweets out “covfefe,” or gives shout-outs to Nazis, or defends Nazis, or retweets Nazis, or hires Nazis, etc, etc, etc…

By the way, not that it has anything to do with this subject but I feel it should be mentioned in case I forget about it, but Donald Trump’s favorite quote from the film “Pulp Fiction” is, “Tell that bitch to be cool. Say: Bitch be cool.” That is very telling.

Also, Trump once said, “Frankly, I wouldn’t mind if there were an anti-Viagra, something with the opposite effect.” There is, Donald. It’s called, “Looking at Donald Trump.” Kills women boners too. He said this in a Playboy Magazine interview which must have had the opposite effect of the centerfold.