Posted on April 9, 2021
You are here: Home / Arts & Entertainment / Cartoons / NO BALLS FOR RACISTS (CARTOON, COLUMN AND VIDEO) 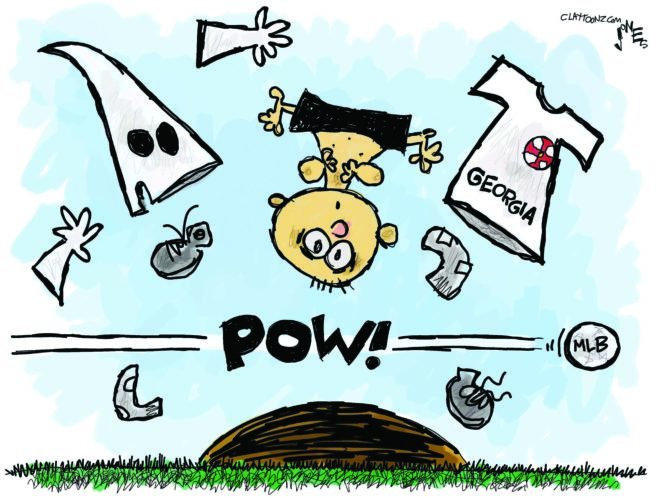 Charlie Kirk is a very young conservative activist and the founder of Turning Point USA, a conservative group that pushes toxic right-wing bullshit to white high school and college students and pays him a salary of over $300,000 a year which is why he lives in a fancy-schmancy million-dollar condo on the water in Longjohn, Florida. After Major League Baseball pulled its annual All-Star game out of Georgia over the new voting laws, Kirk tweeted something dishonest and stupid.

He tweeted, “The MLB is okay playing games in Communist China and Communist Cuba but they draw the line at Georgia requiring signature verification & voter ID?” Did you know MLB had games scheduled to be played in Cuba and China this year? Me neither. The reason we don’t know this is because they don’t. But then again, Kirk has pushed multiple lies about the coronavirus pandemic and Donald Trump “winning” the election, among a lot of other lies.

Sure, MLB had two spring-training games in China back in 2008, and the Tampa Bay Rays played a game in Havana against the Cuba national team with President Barack Obama in attendance, but these events are in the past and the U.S. Constitutional right to vote doesn’t apply to people in China and Cuba. What Charlie Kirk did was play whatabout. It’s to deflect from the facts. It’s to protect racists. Maybe he should shut up and dribble?

Charlie Kirk mentioned signature verification and voter ID in his lame tweet. What he didn’t bring up, surely intentionally, was that Georgia Republicans crafted a new law that has made voting harder for black Americans. It has shortened voting times, eliminated drop boxes, made absentee voting more stringent, give the legislature power over local election boards, and has even made bringing someone waiting in line to vote a bottle of water into crime. Of course Kirk was dishonest. He’s a conservative and a Trump supporter. Have you ever met an honest Trump supporter? That’s a rhetorical question because honest Trump supporters do not exist.

Legislators in 43 states are trying to duplicate the racist voting laws in Georgia. There are currently over 250 measures to make it more difficult for some Americans to vote. We should be expanding the ability to vote, not suppressing it. We should not be making voting harder. In this country, it’s easier to purchase an assault weapon than it is for some Americans to vote.

The New York Times examined and published a detailed breakdown of what the law actually does.

While we are a racist country, the majority of us are not racists. How can that be? We have a very racist system that Republicans are fighting to preserve while the majority of Americans are voting to remove it.

For example, our political system currently has an equal number of Democrats and Republicans in the United States Senate, despite the FACT Democrats represent over 41 million more Americans than Republicans do. White conservatives expect and demand more political representation. Senate Republicans, despite representing a lot fewer Americans than the Democrats, can block any legislation they don’t like. Despite representing fewer Americans, and with this number dropping each election, Republicans have more justices on the federal courts. While the number of Americans who support Republicans and their racist policies is decreasing by the day, their majority on the Supreme Court will last for decades.

Have you ever seen one of those stupid maps on Facebook idiots post that’s supposed to represent how the country is voting? The majority of the map is ridiculously red while there are little blots of blue here and there. They claim this proves the bulk of the nation is voting Republican. What they fail to point out is that those little blots of blue are cities and urban centers while most of the red are areas are sparsely populated counties where if you hear banjo music, you better run.

It works like this: Say there’s an 800-square-mile county in Nebraska and the entire population consists of two Trump-supporting cow fuckers with really bad personal hygiene. That entire 800-square-mile county will be red. Sharing those maps and trying to prove the majority of Americans want racist policies is another example of conservatives and Trump supporters being dishonest…unless they actually believe those maps; then it’s another example of them being morons.

This will cost Georgia millions. This now puts pressure on other companies in the state, such as Delta and Coca-Cola. It puts pressure on Hollywood which is producing shows and movies like crazy in Georgia. “The Walking Dead” is made in Georgia. They make “Stranger Things” in Georgia. All those Avenger movies? Georgia. I watched “Falcon and the Winter Soldier” last night. Once again, Georgia. Can you appreciate the irony they made “Black Panther” in Georgia? We need King T’Challa right now to kick some Republican ass in Georgia.

The MLB boycott It also puts pressure on companies in other states, such as Dell Technologies and American Airlines. Hopefully, it’ll put pressure on racist Republican legislators to stop creating racist voting laws.

Republicans defend themselves over the accusations these laws are racist and restrict voting rights by saying, “Uh-uh. Does not. It expands them in my neighborhood, so what are you talking about? My one black friend saw the law and said, ‘Dy-no-mite!’ This makes life better for black people who enjoy standing in long lines for hours without water. White power! Oops. Did I say that part out loud? Look! A squirrel!”

The states enacting these laws are working to become oppressive fascist states where only the privileged can vote. That brings us back to that Turning Point guy.

Charlie Kirk, with the limited activity he has going on inside his cranium, did manage to get one thing right…inadvertently. He equated the racist, oppressive Republican-led government of Georgia with fascist oppressive governments in China and Cuba. Good job, Moron. Thanks for making our point for us. Now, put the Twitter device down before you hurt yourself.

Creative note: Usually, when a cartoonist borrows, lifts, or steals from another (usually, one more famous and successful) for a political cartoon, like I did today, they write, “With apologies to…” I totally forgot to do that with today’s cartoon and I should have given Sparky a public apology. I truly owe him an apology as my making one of his characters a Klansman may not be something he’d be thrilled with. Sorry, Charlie.