The days when former New York Mayor Rudy Guiliani was called “America’s Mayor” ended years ago. A New York appellate court has now underscored the fact that Rudy Guiliani is now America’s political hack: it has temporarily suspended Guiliani’s law license over lies and misleading statements he made in disseminating The Big Lie — or, perhaps more accurately, many lies — about Donald Trump, the Democrats and the 2020 Presidential election.

A New York appellate court suspended Rudolph W. Giuliani’s law license on Thursday after a disciplinary panel found that he made “demonstrably false and misleading” statements about the 2020 election as Donald J. Trump’s personal lawyer.

The court wrote in a 33-page decision that Mr. Giuliani’s conduct threatened “the public interest and warrants interim suspension from the practice of law.”

Mr. Giuliani helped lead Mr. Trump’s legal challenge to the election results, arguing without merit that the vote had been rife with fraud and that voting machines had been rigged.

“We conclude that there is uncontroverted evidence that respondent communicated demonstrably false and misleading statements to courts, lawmakers and the public at large in his capacity as lawyer for former President Donald J. Trump and the Trump campaign in connection with Trump’s failed effort at re-election in 2020,” the decision read.

Mr. Giuliani now faces disciplinary proceedings and can fight the suspension. But the court said in its decision that Mr. Giuliani’s actions had posed “an immediate threat” to the public and that it was likely he would face “permanent sanctions” after the proceedings conclude.

Mr. Giuliani’s lawyers, John Leventhal and Barry Kamins, said in a statement that they were disappointed that the panel took action before holding a hearing on the allegations.

“This is unprecedented as we believe that our client does not pose a present danger to the public interest,” they said. “We believe that once the issues are fully explored at a hearing, Mr. Giuliani will be reinstated as a valued member of the legal profession that he has served so well in his many capacities for so many years.”

The suspension marked another stunning chapter in the rise and fall of Mr. Giuliani’s long legal and political career. He rose to national prominence when, as New York City mayor, as he steered the city through the Sept. 11, 2001, terrorist attacks.

Whether it was in his ill-fated and hideous attempts to get the Republican Presidential nomination, indications that he knew about Russian hacking in the 2016 Presidential election, his efforts to pressure Urkraine or his press conferences where his absurd and Twlight Zone-ish utterances and hair dye made him a laughingstock (not to mention his ..ahem…memorable cameo in Borat 2), Rudy Guiliani is the textbook example of someone who destroyed his own branding to become a caricature of himself. And a dream come true for satirists, cartoonists and late night TV.

This is a temporary suspension of his license. Theoretically, he could get it back which would be a disgraceful day for the legal profession.

As I just said to @KateBolduan: It is a very big deal, and very rare, for a law license to be suspended. Another moment of shame, fully earned, by Rudy Giuliani. https://t.co/TQgPQ9IgYm

Earlier this year @RepMondaire and I wrote a letter requesting that Rudy Giuliani be disbarred. We are pleased his law license has been suspended. He has dishonored the legal profession, become a national embarrassment and violated numerous ethical rules of professional conduct. https://t.co/6QZcDD0TxR

Rudy Giuliani's license to practice law suspended in New York. Of course he hasn't really been a practicing lawyer for some time.

Question ?. What role is the disgraced and disgraceful Rudy Giuliani going to play at the public ceremonies for the 20th anniversary of the 9-11-01 attack on America? I hope none. An underreported part of the Rudy story was his disgusting 9-11 profiteering, done in plain view.

Wow. Huge: interim suspension of Giuliani based on uncontroverted facts of many false statements to courts and the public re 2020 election, to protect the public from him while case is considered for permanent action. Interim suspension is very unusual and happened very fast. https://t.co/LChKnYDwb4

It is very rare for a lawyer to have their law license suspended due solely to making false and misleading statements.

It is a testament to how extreme and harmful Rudy Giuliani’s conduct was. He abused the legal system to undermine our democracy and try to overturn an election. https://t.co/XM0scRGrIP

Rudy Giuliani, Sidney Powell and MyPillow CEO are due in court over election lawsuits

All three have been sued by Dominion Voting Systems for pushing false claims. https://t.co/CKe6AV6sLK 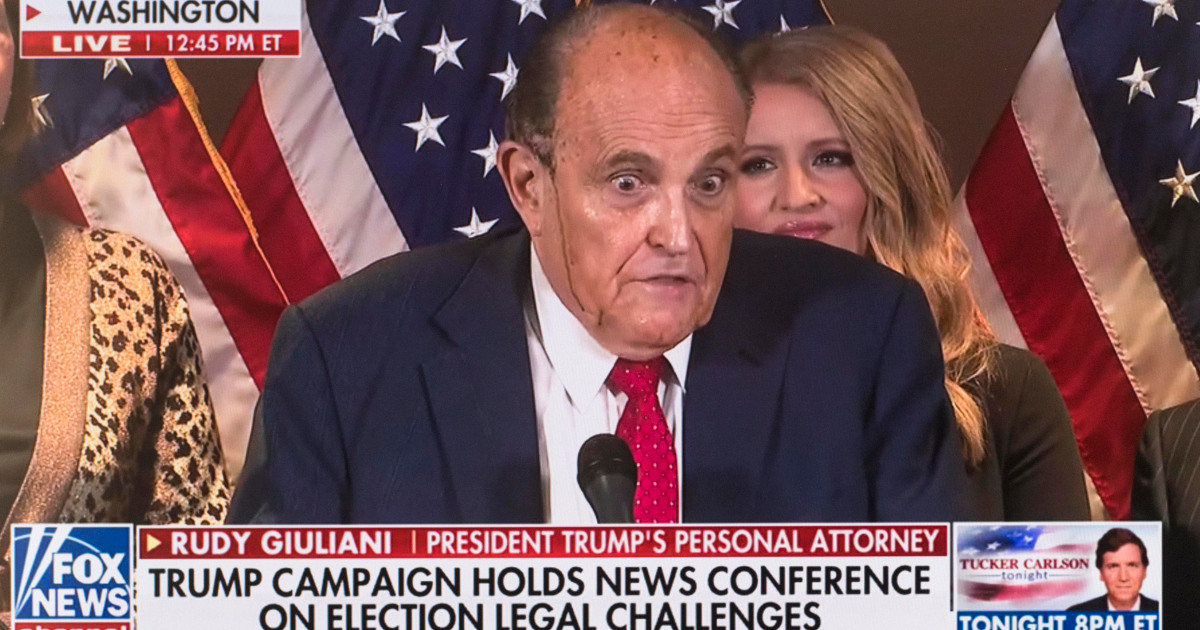