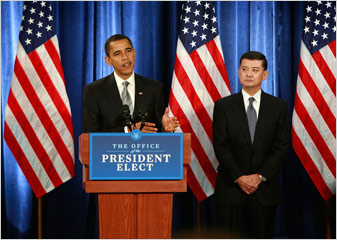 President-elect Barack Obama has selected retired Gen. Eric K. Shinseki to head a department that, under the Bush administration—while a war was raging—often failed to adequately protect and support those entrusted to it, those who have sacrificed so much for their country: the Veterans Affairs Department.

I will not go into the failures and the shame of that department under Bush—they are too numerous and well publicized. But, as a retired military, I applaud president-elect Obama for this excellent choice.

Because of the manner in which the former Army Chief of Staff was vilified by the Bush administration—in particular by Donald Rumsfeld & Co.—for his warnings on the number of troops that would be needed for the Iraq war and occupation, some will call this selection poetic justice or ironic. I will just call it the right choice.

As most of us remember, the four-star general, recipient of two Purple Hearts for injuries sustained in Vietnam, testified before Congress in February 2003 (just a month before the Iraq invasion), that “several hundred thousand soldiers” would be needed to effectively stabilize and maintain a postwar peace Iraq. He also warned about “ethnic tensions that could lead to other problems…and so it takes a significant ground force presence to maintain a safe and secure environment.”

Most of us also remember Rumsfeld’s angry reactions to Shinseki’s comments, and his deputy’s, Paul Wolfowitz, now infamous public rebuke of the general’s recommendations as being “wildly off the mark,” and suggesting that the Iraqis would welcome the Americans as liberators.

According to the New York Times in today’s “General Critical of Iraq War Is V.A. Chief Pick”:

With the subsequent years in which Americans battled ethnic insurgents, and after President Bush agreed in January 2007 to a “surge” strategy of more troops, General Shinseki was effectively vindicated, and military officials, as well as activists and politicians, publicly saluted him. By then, however, General Shinseki had been marginalized on the Joint Chiefs of Staff and quietly retired from the Army.

Yes, Shinseki was marginalized, as were so many other patriotic, high ranking military generals and admirals who dared to criticize the Bush administration’s push for, plans for, and conduct of the Iraq war.

Yes, Shinseki is the right choice to head the V.A., not because it may be seen by some as “poetic justice,” and not only because of his 38 years of superb military service and experience, but because he is a “soldier’s soldier.” He has himself experienced the physical and mental sacrifices our soldiers make; he knows the needs of our veterans; he is respected by rank-and-file military; and he risked his career by speaking out against what he felt would not only endanger the mission in Iraq, but also the lives of the troops who would be asked to serve there.

He is a wounded hero who survived and worked his way to the top. He knows soldiers and knows what it takes to keep faith with the men and women who went forth to serve the nation. He also knows how to run large and complex bureaucratic institutions. His is an inspired selection.

And Sen. Daniel Akaka, chairman of the Veterans Affairs Committee, which will consider the nomination, “General Shinseki is a great choice. He is well aware of the needs of our veterans and will make an excellent secretary. . . . He is a man of great ability and integrity.”

Kori Schake, a fellow at the conservative Hoover Institution who served on Bush’s National Security Council during the run-up to the war, said Shinseki is “a great choice. . . . Shinseki will be a terrific advocate for and leader of our Veterans Administration. He distinguished himself in caring for wounded warriors while chief of staff, and I’m certain he will serve veterans and the country well.”

And, perhaps alluding to poetic justice, also in the Washington Post, Juan Cole, a University of Michigan history professor who writes about the Iraq war and Islam, called Shinseki’s appointment ironic.

If Rumsfeld, Wolfowitz and [former undersecretary for defense Douglas J.] Feith had listened to Shinseki, there wouldn’t be as many wounded veterans to take care of,” Cole said. “I think this is a way of saying, ‘Here was a career officer who had valuable insights who was shunted aside by arrogant civilians, and we’re not going to make the same kind of mistakes.’ ”

Most importantly, General Shinseki himself in a private letter he wrote to Rumsfeld in June 2003 just before stepping down as chief of staff:

People are central to everything we do in the Army. Institutions don’t transform, people do. Platforms and organizations don’t defend the nation, people do. . . . Without people in the equation, readiness and transformation are little more than academic exercises.

The Washington Post obtained a copy of this ” never publicly released” letter in August.

Shinseki will have his hands full. Again, The Washington Post:

The Veterans Affairs Department has long been a sprawling bureaucracy fraught with difficulty, and Shinseki immediately will face problems compounded by the wars in Iraq and Afghanistan, which are contributing to a backlog in claims, an increasing suicide rate and health-care problems.

If anyone can make the V.A. do what it was originally intended to do, Shinseki will.