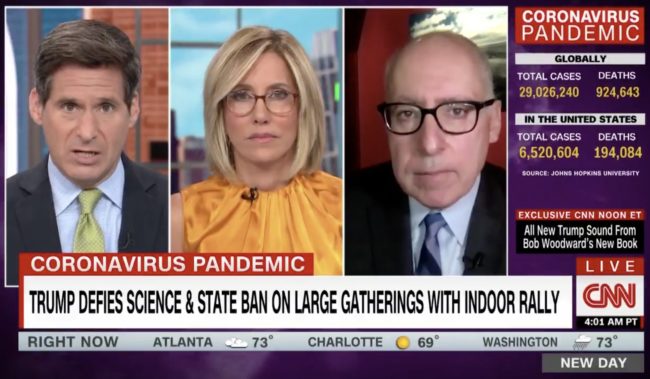 Nevada Gov. Steve Sisolak has blasted President Donald Trump — who has called himself the law and order candidate — for violating the state’s regulations on coronavirus restrictions for an indoor rally.

Shortly before President Trump took the stage on Sunday night in Henderson, Nev., for his first indoor rally in months, Nevada Gov. Steve Sisolak blasted the president for flouting the state’s coronavirus restrictions by packing hundreds of supporters, many without masks, into a building.

The Democratic governor noted that Trump and his campaign were violating Nevada’s ban on gatherings of 50 people or more, tweeting that the president’s rally at Xtreme Manufacturing was “shameful, dangerous and irresponsible.”

“Tonight, President Donald Trump is taking reckless and selfish actions that are putting countless lives in danger here in Nevada,” the governor said. “The President appears to have forgotten that this country is still in the middle of a global pandemic.”

The indoor rally, which featured maskless supporters standing shoulder-to-shoulder inside the industrial facility, came as the United States surpassed 190,000 dead from the novel coronavirus. In Nevada, where Trump held multiple events over the weekend, there have been more than 73,500 cases and more than 1,450 deaths related to the virus.

Sunday’s rally followed a campaign event last week in Winston-Salem, N.C., in which Trump mocked pandemic restrictions by not wearing a mask and jeered at the state’s restrictions against outdoor gatherings of more than 50 people.

A GOP county chair asked Trump to wear a mask to his rally. Instead, Trump mocked pandemic restrictions.

Trump campaign spokesman Tim Murtaugh rejected criticism of the rally, with the campaign noting that rally attendees were subject to a temperature check, had access to hand sanitizer and were provided masks and encouraged to wear them.

“If you can join tens of thousands of people protesting in the streets, gamble in a casino, or burn down small businesses in riots, you can gather peacefully under the 1st Amendment to hear from the President of the United States,” Murtaugh said in a statement.

President Trump attempted to hold an unmasked, indoor superspreader event in Henderson, Nevada on Sunday night, running afoul of Nevada regulations and his own administration’s guidelines. (Due to meager turn out, I have taken the liberty to downgrade it to a Category 3 minispreader.) This was Trump’s first indoor rally since the Tulsa disaster that cost Brad Parscale his job and after which Herman Cain lost his life.

This latest public-health monstrosity came on the heels of the president, at a separate maskless gathering earlier in the weekend, mocking his opponent Joe Biden for having followed responsible social-distancing protocols.

I tuned in last night because the president’s brazenness in the face of this obvious public health threat was a curiosity for me. Weren’t we told that he was a germophobe? And didn’t he admit to Bob Woodward that he knew the virus was airborne? So shouldn’t the screaming plebes freak him out a bit? Was the germophobe bit also a lie? Maybe he just didn’t like it when people of color touched him? Or has his narcissism and deep-seated desire to downplay the virus overwhelmed his germophobia?

While I wasn’t delivered any answers on this point, I was reminded about just how absolutely jarring it is that this man is ostensibly at the helm of our government in these trying times.

At a time when Nevada is focused on getting our economy back on track and protecting public health, the President’s actions this weekend are shameful, dangerous and irresponsible.

That means limiting gathering sizes, mandating face coverings and practicing social distancing. All of which the President recklessly disregarded for his own gain this weekend in Nevada.

Tonight, President Donald Trump is taking reckless and selfish actions that are putting countless lives in danger here in Nevada.

Instead, he came into our State and blatantly disregarded the emergency directives and tough choices made to fight this pandemic and begin reopening our economy by hosting an indoor gathering that’s categorized as “high risk” according to his own CDC.

This is an insult to every Nevadan who has followed the directives, made sacrifices, and put their neighbors before themselves. It’s also a direct threat to all of the recent progress we’ve made, and could potentially set us back.

Every doctor working on the White House pandemic team would agree: “Tonight, President Donald Trump is taking reckless and selfish actions that are putting countless lives in danger here in Nevada,” the governor said. https://t.co/fUY9NPP1vB