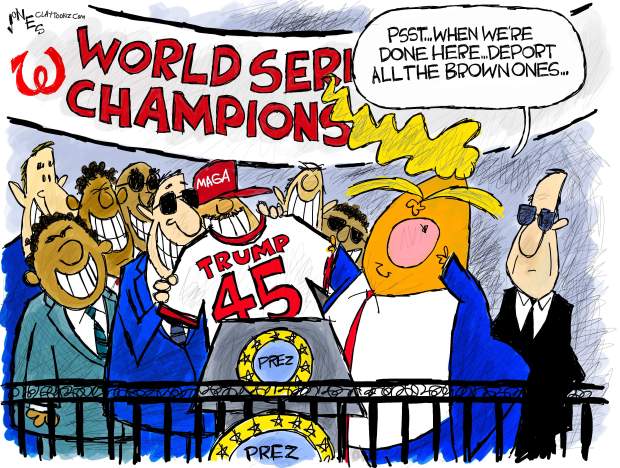 It’s not that I’m disappointed by the Washington Nationals. I’m disgusted.

I have never lived in an area of a major league baseball team winning the World Series. I’m a Cubs fan, but I do like the Nats. I have enjoyed their run to the World Series. While the Washington Capitals won the Stanley Cup two seasons ago, the University of Virginia won the Men’s NCAA basketball tournament earlier this year, and the Washington Mystics won the WNBA title this past weekend, I’ve never seen excitement like this area displayed for the Nationals over the past few weeks.

You can’t go outside without seeing someone in Nationals gear. From Gaithersburg all the way down to Fredericksburg, people are selling Nationals shirts and caps on the side of the road. You can’t have a conversation in this area without the Nats coming up. The cable guy came over last Thursday and he helpfully informed me the Nationals won the World Series the night before. This region hasn’t been universally fixated on a single subject like this since the D.C. Sniper.

The Nationals have built goodwill in this community and they’re widely loved. The Nationals won five elimination games in the playoffs, which is a first. They came back after being given up on after the All-Star break. They barely made the playoffs, then stormed their way to win it all. The Nat’s home ballpark was full of spectators to watch them play game 7 in Houston. On Saturday, the city threw them a parade. The next night, they were celebrating on ice with the Capitals. And come Monday, they blew it all away on some Trump MAGA bullshit.

Championship teams are always invited to the White House. Well, they used to be. Politics has entered the situation a few times before, but for the most part, politics hasn’t been a factor in visiting the White House, no matter if the president is a Republican or a Democrat. It was rare for an athlete to be scorned for visiting. It was never about the president as much as it was about the office and the invitation. The team shows up, remarks are made, and the president gets a jersey. Boycotts by athletes are rare. That changed with Trump.

Trump is the most divisive president in American history. While Republicans criticized President Obama for weighing in on matters they said didn’t concern him, like a white cop arresting a Harvard professor for entering his own home, they’re supportive of Donald Trump using black athletes protesting police violence to feed his racist base and demanding that they all be fired. They’ve sat back and watched Donald Trump feud with LeBron James, Steph Curry, Colin Kaepernick, Meghan Rapinoe, and the Philadelphia Eagles.

Trump refused to invite the Philadelphia Eagles to the White House after they won the Super Bowl, citing kneeling protests during the national anthem before NFL games. Never mind that none of the players for the Eagles ever participated in those protests. He invited the Golden State Warriors to visit the White House until Steph Curry made comments saying he wouldn’t go…and then Trump uninvited them because he’s a toddler (in a public diss, the Warriors did meet with former President Obama). He didn’t invite the U.S. women’s national team after they won the World Cup and said they wouldn’t accept an invite. So far, Donald Trump hasn’t invited the Mystics, probably because he’s afraid of black women.

The Red Sox visited in 2018, but most of the minority members of the team refused to attend. Only one National has publicly stated he was refusing Trump’s White House invite.

Reliever Sean Doolittle and his wife, Eireann Dolan, have been involved in political and social issues, including working with Syrian refugees and military veterans and supporting gay rights. Doolittle said, “People say you should go because it’s about respecting the office of the president, and I think over the course of his time in office he’s done a lot of things that maybe don’t respect the office.”

The region that supports the Nationals is blue. Washington, Maryland, and Northern Virginia are very liberal. While the players shouldn’t be silenced or discouraged from expressing their beliefs, they should always be mindful of the feelings of those who support them. While they might hold their noses, their fans wouldn’t hold it against them for visiting Trump’s White House. But after observing the actions of several of the players, a lot of fans will feel dirty wearing their Nationals caps.

Eight of the Nationals didn’t attend, and the ones who did are now downplaying their actions. Yeah, they got some explaining to do.

The team fawned and slobbered over Donald Trump so much that Mike Pence probably said, “get a room.” Kurt Suzuki put on a “Make America Great Again” cap and then he was groped from behind by Trump. Yes, it looked as bad and awkward as I described it. Ryan Zimmerman has been a favorite of fans since the team relocated from Canada and made him its first-ever draft pick. What he did Monday has now tarnished his reputation. He stepped up to the microphone and thanked Trump, the man who’s personally responsible for the increase in hate crimes in this nation, for “keeping everyone here safe in our country.” Ugh. And then he thanked him for “continuing to make America the greatest country in the world.”

What the hell, Zimmerman? Were you coached on Trump flattery by Gordon Sondland? Are you seeking an ambassadorship? Zimmerman aped Trump’s campaign slogan. All that was missing was him leading a chant of “lock her up” and “build the wall.”

Zimmerman, who is a white multi-millionaire, is oblivious or has chosen to ignore Trump’s attacks on people who don’t look like him. He’s ignoring Trump’s racist insults toward people who look like his teammates. Actually, these Nationals are ignoring that several of their teammates are from the nations Trump has defined as “shitholes” and is working tirelessly to prevent people immigrating to this nation from them. Zimmerman and his teammates are ignoring Trump’s past comments of “send them back.” A portion of this team would never have been invited to the White House, less enough allowed to enter the country if they weren’t baseball players.

These Nationals aren’t representative of their community; and that’s not only disgusting but heartbreaking. Couldn’t our sports teams just break our hearts from their failures in the game, and not by revealing they’re Trump-supporting troglodytes eager to join his goon squad?

Last week, I drew a cartoon of Trump inviting, not the Nationals, but the Nationalists to the White House because he knew they wouldn’t boo him. From witnessing the vulgar displaying of nationalism from the Nationals Monday, that’s exactly what he got. It couldn’t have been more of a MAGA hate rally if he had invited Kurt Schilling and Ty Cobb.

It’s crap like this that makes me think I should only watch basketball. Now if only the Washington Wizards would change their name.