Posted on July 29, 2022
You are here: Home / Health / coronavirus / More from New York City: Bonfire of the Tragedies 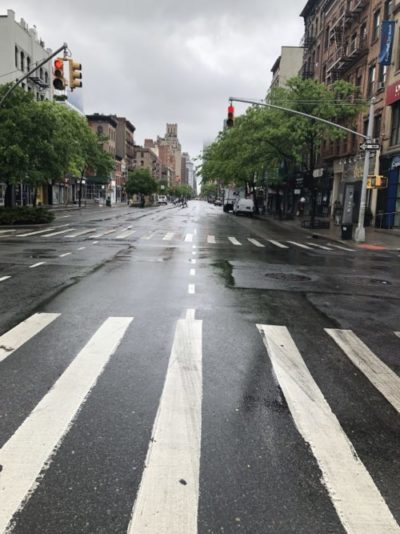 “Manhattan sinking like a rock,
Into the filthy Hudson what a shock…
They said it was like ancient Rome.”

Recently I wrote about how my dog “Aussie” is the perfect excuse to go downstairs and enjoy the outdoors, mainly in the company of the free-roaming homeless, food shoppers and other dog walkers.

It is still like that but even more empty: in the 1980s the US developed the “Neutron Bomb” which only killed people while barely touching the landscape or infrastructure. It was met by a roar of anti-nuclear protests and these days here remind us of the Neutron Bomb terror.

Mask wearing is near total here now. In a few weeks you’ll be more likely to see nudity than a “mask hesitant” human face. As it turns out mask compliance is predicated along the lines of Democrat vs. Republican and female vs. male and you can probably guess which demographics are more compliant with health department instructions.

Also, not surprisingly, masking is predicted by “educated” vs. “the poorly educated” – where compliance goes up in lockstep with educational attainment. And inversely with Trump support. So there are many surprises in these times and many not-surprises. Nevertheless, we’re nearly all masked, scarf-wrapped or bandanna’ed here in Gotham.

As a “height weight appropriate” but middle age male I’ve long wanted to increase my life expectancy by exercise and the proliferation of “CitiBike” rental stations allows me that chance. Further, at the moment there are so few cars the danger factor (terrifying here for bikes) is much reduced but I’ll still be able to ride over or through as many pedestrians as I can hunt on my heavy CitiBike.

There are fewer people for me to hit though: our city is smaller. Earlier there was a general feeling some folks had cleared off but the New York Times confirmed this recently with big data informing us that 5% of NYC’s population had left, many more (30%) in the tonier neighborhoods of Manhattan and Brooklyn.

So “Where have the people gone, my honey?” – to quote Jerry Garcia. Not all to second homes as the rumors suggest: some decamped to relatives or friends, some couch surf and others go to early summer rentals by the shore – a local seasonal migration at the pricier end of the scale.

If your life and career haven’t been fed into the covid-shredder – and you’re still here – you can actually enjoy the Zen-like tranquility of walking a formerly busy street now alone with your dog. You’ll enjoy air so unpolluted you could eat off it, if that weren’t a clunky metaphor, and you can laugh at the weirdness of a lone delivery bike sailing southward “down” north flowing 8th Avenue.

But your reverie is blunted by the shuttered stores and restaurants: some guy’s dream (a snazzy barber shop’s new $50K upgrade in November, now gone), some lady’s hard-worked-for restaurant all dissolved behind shuttered picture windows and quirky, apologetic signs. And their employees represent more lives torn apart, more foreclosures and evictions, bankruptcies and unpaid bills.

Not for the shareholders in today’s America, though. Our corrupt administration and notorious first crime family have been pumping billions into the stock market for the benefit of cronies and donors: a stock market enjoyed by 20% of us and this while millions nearly starve. Because it is better, apparently, to bail out the large corporations with billions in the bank, the “jobs creators”, Harvard’s endowment fund ($41B and counting), obscenely rich sports teams and the 1% than the working poor who, unlike the aforementioned, will spend any money they get right back into the economy.

So after my Zoom-friends-time it’s a cheap CitiBike ride for me tonight. Maybe I’ll put my shaggy dog “Aussie” in the front basket like little Elliot and E.T. and fly up to the moon – which we can now see clearly!.

And if you’re of a certain age you’ll remember that: “if you get caught between the moon and New York City…..”

You know the rest. 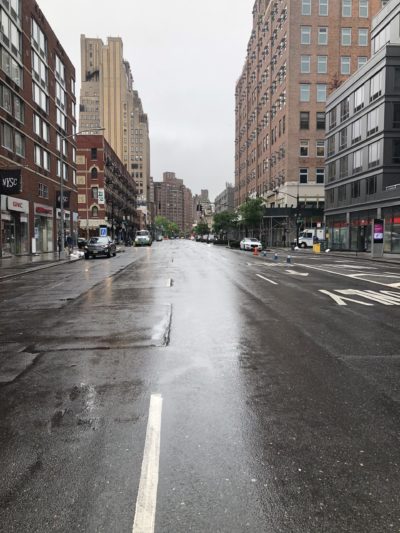 *Masks: Democrats “outmask” Republicans by a large margin and women are more “masky” than men. So there.

David Anderson is an Australian-American NYC writer and attorney in Chelsea, Manhattan with a background in finance and law.