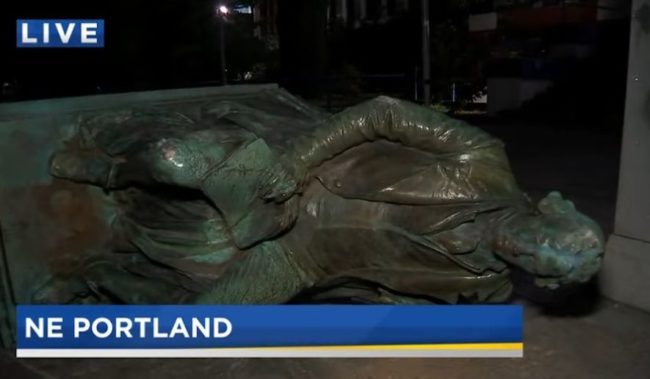 One of the big things in the news lately is the odd phenomenon of protesters and anarchists desecrating, defacing, and destroying monuments and statues around the country. I say odd because it’s really sort of a new tactic. I guess maybe we’ve seen some of this in the past, but it seems to be something that those who feel the need to protest and destroy seem to think is effective.

First we saw the phrase “defund the police”. As I said on other posts this is a huge blunder and maybe the worst marketing/branding mistake I’ve ever seen. As soon as that phrase pops up, the vast majority of people turn away. And even if some of the more rational voices in protest try to explain, try to bring up reasonable reform, try to distance themselves from it…it’s too late. Their only solution is to totally divorce themselves from that ridiculous and emotionally charged phrase.

Now we see the legitimate protesters being jumbled up with the anarchists. Antifa has smartly taken up the cry from BLM and has distorted that message to be perverted to their own. The reason for that is that Antifa methods and actions are so outrageous, so offensive, so damaging that they see cover in the BLM movement. Because here’s the deal. After the George Floyd murder and resulting protests, the BLM movement had a lot of potential allies. A large number of people in the country have recognized the oppression and inequality that our fellow black citizens have faced. They are sympathetic and they want to “do something”. I’ve seen more of my friends, colleagues and acquaintances than I can believe voice that very thing. I’ve seen people reaching out and wanting to understand, take action and seek change. Many, many people want to get involved and take some action (which may be undefined today) to positively effect change.

But when things are uncertain, the tendency is to be reluctant in the face of that uncertainty. Whether they know it or not, the good people who are sincerely protesting racial inequality have been lumped with the anarchists and that will do them damage. If people sitting at home watching who are sympathetic and want to see change can’t tell the people protesting for racial justice from the anarchists, the anarchists are winning.

Over the last several days we’ve seen a part of Seattle deteriorate into a chaotic, fascist state. We’ve seen statues and monuments of Christopher Columbus desecrated and destroyed. I wrote a post about Columbus last year that still applies and you can read it here. We’ve seen statues and monuments of George Washington and Thomas Jefferson pulled down. Probably most oddly we saw the statue of Ulysses S. Grant, a key opponent of slavery and a President who did a lot of advance the lives of slaves after emancipation, destroyed. That makes no sense at all, except it fits with the narrative of destroy everything connected with the country.

This weekend we have seen that statues of Francis Scott Key, the author of the Star Spangled Banner and Father Junipero Serra, a Jesuit missionary in early California days were toppled. And of course we’ve seen a lot of statues of heroes of the Confederacy desecrated and destroyed. The Confederate statues and monuments have been controversial for quite a while and we’ve seen a growing movement to take action to move them out of the public view. Personally, I’d be in favor in moving them to a place, community by community, that is more appropriate than a public park or venue for all to see. These things are historical and deserve to be preserved to tell the stories.

But I’m sympathetic to our black citizens who might have to walk by them every day and relive that horrible history. The city of New Orleans has done a good job with this as they’ve moved a lot of Confederate statues to more appropriate places. They didn’t destroy them, they moved them. Big difference. But I get that there are many who strongly disagree. So be it. In time the situation will be resolved. But most don’t believe the resolution comes when violent mobs pull down a statue.

All of this is in addition to the ongoing protests and riots that aren’t getting huge coverage in the media, but they are there. The media is way more focused on how big Trump’s rallies are and what is his latest outrageous screw-up to indicate what a genuine asshole, traitor and criminal he is…according to them. But I digress.

The point is that when good people are protesting and urging legitimate change in an area that cries for change and they get lumped with anarchists who want nothing more than to destroy, their cause will become diluted and lose inertia real fast. Because while many average folks, both white and black, will buy in to helping with legitimate and rationalized change, they will not stand for the destruction of their society and way of life. They may be patient. They may not want to get involved when the destruction is far away and lightly covered in the media. They may even be willing to suffer insults while trying to understand how to help. But protests and change are one thing, destruction and devastation are another.

I hope (and believe) that at some point enough people will be fed up that they will vote in officials who will take decisive action against these assholes. And by decisive, I mean strong, harsh action that will squash them.

And the BLM protestors, the sincere ones, deserve to have their voices heard and to be allowed to build a movement that will stimulate change for the better. But as long as they align themselves with things like “defund the police” and the anarchist movement they will be stymied. Their voices will be drowned out.

And that’s too bad. Because it’s a message we all need to hear.

Originally published on Mike’s at the Beach blog.