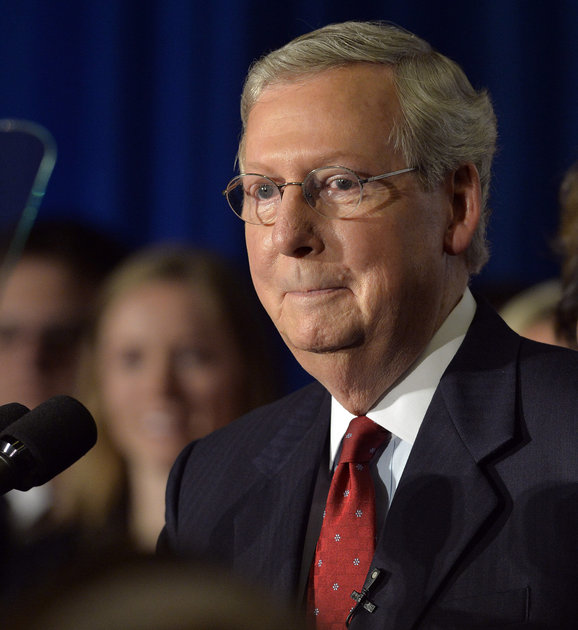 Now that people are experiencing the advantages of the Affordable Care Act it is becoming harder for Republicans to call for repeal. While people might tell pollsters they dislike Obamacare, they also oppose the consequences of repeal. In Kentucky, people might say they dislike Obamacare, but they certainly do like Kynect, their highly successful insurance exchange. This is resulting in problems for Mitch McConnell who has been calling for the repeal of Obamacare and is now up for reelection.

McConnell has been trying to express support for Kynect while continuing to oppose Obamacare. It is necessary for one to be either dishonest or quite ignorant about the Affordable Care Act to make claims such as the ones McConnell is making:

“If Obamacare is repealed, Kentucky should decide for itself whether to keep Kynect or set up a different marketplace,” McConnell campaign spokeswoman Allison Moore told WFPL.

McConnell is being dishonest with his claims that premiums are skyrocking and Medicare is being cut. One reason people in Kentucky support Kynect is that it is allowing them to obtain health insurance at a lower cost. Republicans are resorting to scare tactics with claims of Medicare cuts.

The Kentucky Herald-Leader had this editorial criticizing McConnell for attempting this deception:

Nothing could be more connected — or should be more important to Kentucky’s senior senator — than the fates of the more than 400,000 Kentuckians who are getting health insurance, many for the first time, and the federal Affordable Care Act, which is making that possible.

Repeal the federal law, which McConnell calls “Obamacare,” and the state exchange would collapse.

Kynect could not survive without the ACA’s insurance reforms, including no longer allowing insurance companies to cancel policies when people get sick or deny them coverage because of pre-existing conditions, as well as the provision ending lifetime limits on benefit payments. (Kentucky tried to enact such reforms in the 1990s and found out we were too small a market to do it alone.)

Kentucky’s exchange also could not survive without the federal funding and tax credits that are helping 300,000 previously uninsured Kentuckians gain access to regular preventive medicine, including colonoscopies, mammograms and birth control without co-pays.

As a result of a law that McConnell wants to repeal, one in 10 of his constituents no longer have to worry that an illness or injury will drive them into personal bankruptcy or a premature grave.

Kynect is the Affordable Care Act is Obamacare — even if Kentuckians are confused about which is which.

Just for the record, McConnell saying that Kynect can survive the repeal of Obamacare is like saying that the Oklahoma City Thunder can trade Kevin Durant, but keep his jump shot.

The Kynect website and call center was paid for with federal money from the ACA, specifically $252 million in federal grants. Without the ACA, Kentucky foots the bill for a website that is worthless.

Over 300,000 Kentuckians gained Medicaid coverage because the ACA expanded Medicaid eligibility and Kentucky did not opt out, and that coverage is 100 percent paid for by federal money under the ACA, until it becomes 90 percent after a few years. Without the ACA they are no longer eligible, unless Kentucky changes their state law and pays through nose to cover these new people (that is not happening).

Most of the 82,795 Kentuckians who bought private insurance through Kynect were able to do so with the help of federal subsidies only made possible by the ACA. Without the ACA, those plans that have strong consumer protections on preexisting conditions, not being dropped from coverage for getting sick, and spending caps are no longer mandatory, so they’re gone. Gone as well is the requirement that children must be covered under their parents plans through the age of 25. Without the ACA many of these people won’t find someone to insure them, and many are forced to go back to junk plans that are worthless when you have a medical emergency or plans that are unaffordable without federal ACA subsidies.

Without the ACA, Kynect is nothing but a worthless website that would soon go dark, and roughly 400,000 Kentuckians will lose their coverage and the consumer protections it provides, and will therefore be thrown back into the old healthcare system that had failed them beforehand.

What McConnell is hoping to do with this strategy is deceive Kentucky voters who like what Kynect is doing but have a negative perception of the Affordable Care Act, and hope that the media here will do lazy “He said, She said” reporting that does not explicitly point out that what McConnell is saying is flatly false. He might turn out to be successful on that front, but this might also be a good opportunity for Alison Lundergan Grimes to get off of the sidelines and actually talk about health care with the media and voters so they know exactly what McConnell is trying to do, and have an honest conversation about what she would do. Or, she can continue staying out of this fight, and just hope for the best. Your call, Alison.

This should make it easier for McConnell’s opponent, Alison Lundergan Grimes, to defend Obamacare. Instead it looks like she is trying to play it safe. Greg Sargent discussed how Grimes is talking about the Affordable Care Act:

Now the Grimes campaign is finally hitting McConnell over his gyrations on the issue, accusing him of “voting to destroy Kynect.” From Grimes senior adviser Jonathan Hurst:

Mitch McConnell has been in the fantasyland that is Washington for so long that he cannot tell the difference between fact and fiction. McConnell has voted to destroy Kynect — and he has said he will do it again. In the U.S. Senate, Alison Lundergan Grimes will fix the law to ensure it is working for all Kentuckians.

This seems somewhat defensive. It again leans heavily on a vow to “fix” the law, and doesn’t state flatly that Kynect is a policy success. Some Dems, such as Rep. John Yarmuth and pollster Celinda Lake, have suggested Grimes go further. Lake told me the other day that her polling has showed that Kynect polls positively in Kentucky, even as the law known as “Obamacare” or the “Affordable Care Act” remains under water.

Lake suggests this to Grimes: “She could say, `In Kentucky, we got it right. I’ll take Kentucky values to Washington.”

The idea would be to focus people on something they like — the state exchange — separating it from the hated Obummercare, localizing the contrast between the two candidates’ positions. Her statement today does not mention Obamacare, signaling again that Kynect is far more popular in the state, and that it’s now somewhat safe to make an issue at least out of the state exchange. Indeed, elsewhere Grimes has said: “I am not and will not be for taking away insurance that 400,000 Kentuckians just recently got access to.”

Still, given the tentativeness of Grimes’ statement, clearly she is still not prepared to cross over into seriously making an issue out of that contrast, and it just won’t be a central point she makes. As noted here before, I understand all the reasons for Grimes’ reluctance.

While it is understandable that Democrats would show some reluctance to being associated with Obamacare, failure to speak out probably guarantees their defeat. Democrats need to go on the offensive and take credit for the benefits of the law their party passed. Trying to distance themselves will not work. Everyone knows that this is a policy passed by the Democrats. Acting scared only reinforces the negative views and makes Democrats look weak. As long as Democrats remain afraid to forcibly speak out about the benefits of Obamacare and explain its benefits, voters will fall for the type of deception Mitch McConnell is practicing. Voters do want the benefits of Obamacare, and the popularity of Kynect gives Grimes the perfect opportunity to speak out in its defense.