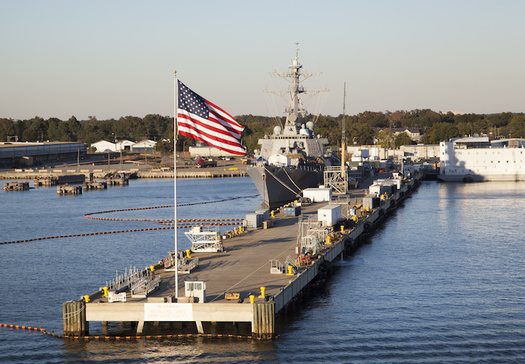 RALEIGH, N.C. — The U.S. Senate soon is expected to consider the National Defense Authorization Act, which passed in the House last week.

For the first time, the bill provides funding that would help the military reduce security risks from climate change, including at vulnerable coastal military bases such as Marine Corps Base Camp Lajeune, near Jacksonville.

“On the tactical side, you face increased extreme weather that can impact base operations,” says Sperling. “You saw that at Camp Lejeune. When hurricanes hit, they create challenges where troops that were going to deploy end up having to stay and respond to the challenges at home.”

An analysis of 18 East and Gulf Coast military installations by the Union of Concerned Scientists found the majority of bases will experience increased tidal flooding and land loss within the next few decades.

Sperling says climate change also drives global instability that could prompt military intervention. She cites the Lake Chad region in Africa as an ongoing example, where millions of people dependent on the lake for water and fishing income are seeing their natural resources dwindle because of longer and more severe drought.

“And so, they were forced to resort to joining the terrorist organization to be able to support their families, to be able to provide income, food,” says Sperling. “In a time when their previous livelihood, which was dependent on that lake, has disappeared.”

“It takes situations that are already strained and makes them significantly worse,” she says.

She notes national security threats could also arise as global agricultural production and migration shift due to climate-change events.