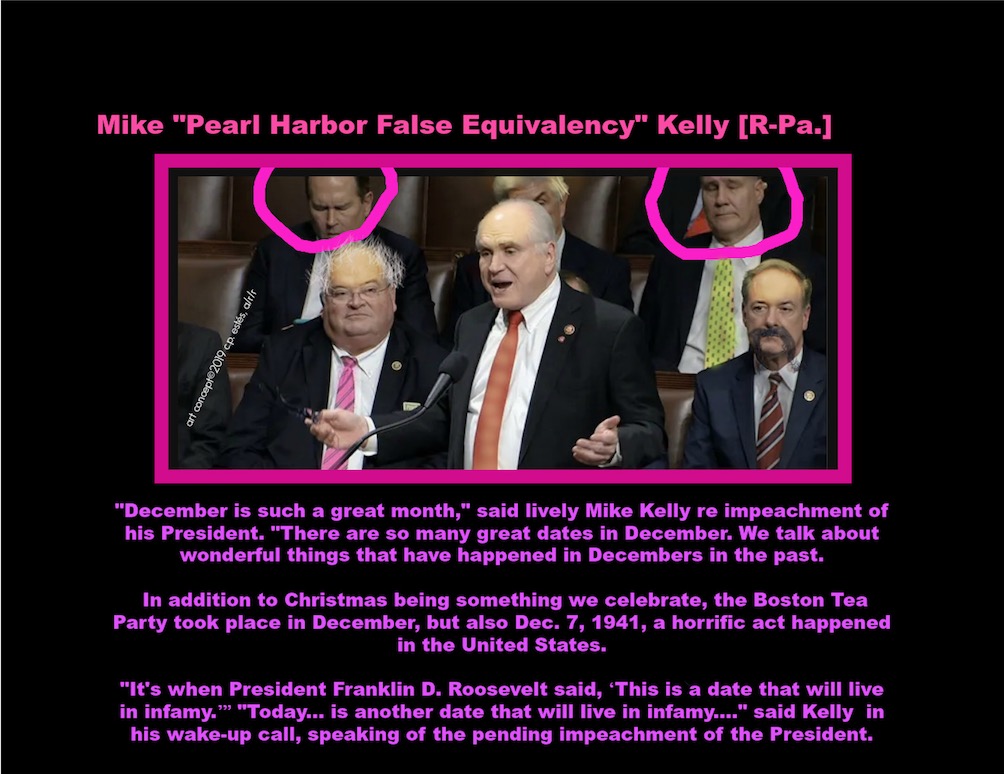 in which he begins by trying to set up what will be a failed climax ::: by offering that December is a mighty fine month because of ” wonderful things that have happened in the past…”

And Kelly says, ‘wonderful December’ because of Boston Tea Party on the 18th of the 12th month, long ago.

Not really. The men from Boston disguised themselves as Native Americans… casting false blame for an act of larceny and destruction of property. The tax on tea had not been raised, it had been lowered. The Bostonian men in literal blackface destroying over 300 huge chests of tea by dumping them in the harbor was about some other things entirely.

For one, having a legislature in Britain deciding the affairs/commerce/laws/ and other things about the colonists far away in the “new world.” The colonists were growing their own tea, for instance, aided by the buying and selling of human beings: slaves. They didnt want to buy by fiat, tea ordered upon them by Britain. Also, the colonists early penchant for tea helped drive the sugar trade in the West Indies where slaves were kept in deplorable captivity to work the fields.

From Boston Tea Party Historical Society: “Benjamin Russell… saw his father and a neighbor smearing each other’s faces with soot and red ochre on the night of the tea party. Peter Slater, a 14-year old rope maker’s apprentice, overheard the excitement on the street… At a nearby blacksmith’s shop a disguised man told him to put charcoal on his face…”

“Joshua Wyeth … had few hours warning of what was intended to be done. It is unlikely that he had time to prepare an elaborate Indian costume. In the same account he mentions how he disguised his appearance. “To prevent discovery we agreed to wear ragged clothes and disfigure ourselves, dressing to resemble Indians.”” “William Tudor, a law student in the office of John Adams and acquainted with some of the members of the Tea Party, remembered… “Two of the persons, who were [in] a kind of Indian disguise, in a passing over Fort Hill to the scene of operations, met a British officer, who on observing them naturally enough drew his sword.”

Sure, men dressed like Native People… the British soldier ‘naturally enough’ drew his sword. You can imagine how that all came down. It’s perhaps no wonder that eventually some Native Americans fought with the British against the colonists, and some fought with the colonists. Betrayal and falsely throwing blame on the innocent can break trust for generations.

The Boston ‘tea party’ though eventually pressing for war with the British on American [and eventually Canadian] soil, does not qualify for “Happy December.” For those trying to throw blame onto innocent Natives and wanting to continue to support the enslaving of tea-growing Africans– “tea party is a badly stained event that was undertaken… in December.”

PEARL HARBOR
But also in December, Rep. Kelly labors onward re Pearl Harbor. This last definitely not matching his topic sentence of ‘wonderful December.” But maybe he didn’t have Irish nuns as grammar teachers.

Rep. Mike Kelly rolls on to say “…Dec. 7, 1941, a horrific act happened in the United States. It’s when President Franklin D. Roosevelt said, ‘This is a date that will live in infamy,’ Today, Dec. 18, 2019, is another date that will live in infamy,” Kelly said apparently referencing the impending impeachment of his president, calling on his clearly faulty memory of Pearl Harbor and his false equivalency to the impeachment.

1. Pearl. Pearl Harbor. Japan and the USA were in negotiations about many things at the time; and Japan didn’t want USA pressing more toward the islands, and USA was alarmed at Japan’s aggression in Manchuria, China and elsewhere.

The 2019 president has not been in serious negotiation with any concerned about his over-stepping, lack of honesty, his tit for tat illegal inquiry re ‘dirt on Biden’ from a foreign entity, his obstructing of witnesses to one of the three branches of the USA Government.

2. Before 8 a.m. in the morning, Dec 7, 353 aircraft from Japan, many dropping 250 pound bombs on the fleet anchored at Pearl… with no warning, murdered the young service personnel, civilians on the ground. 2403 mostly young, laughing, baseball playing, musical instrument playing, singing, fishing, hunting, dog running, dream filled Americans murdered where they stood. 1178 others losing limbs, paralyzed for life, egregious injuries and post trauma for life as well.

The president of 2019 has had plenty of warning of the drums of impeachment, time and again. There is no equivalency to Pearl Harbor massacre. The President of 2019 did not die on any now hallowed ground. To try to hoist a false equivalency of a massacre of young sailors to equal the pique of a man who never served because of his ‘foot spurs,’ is so off the mark as to pour grain through a funnel with no bowl under it.

3. it was lack of warning by Japan while USA was in peace talks with that nation that caused FDR to say that day would go down in infamy.

It was not only the hideous deaths by shrapnel and burning and concussive bombs– literally blowing the bodies of the young apart… it was ALSO that the peace talks were understood as good faith negotiations AND there was no warning about what Japan would unleash. Those together were the ‘infamy’FDR spoke about.

The lack of negotiations with anyone by the 2019 president, except his cronies; repeated warnings to him going unheeded; no loss of life to him; no trauma to see the burnt bodies of comrades; his not hearing the weeping and screaming non-stop; his not choking on the smoke of iron and rubber and burning ordnance;

Him having no years of taking long painful roads back to semi-best health; not ever having one’s own mother be a gold star mother; not having sisters and brothers, parents, grandparents and friends who mourned their young for decades; him never being a part of the sad rescue and recover operations searching for bodies, and parts of bodies, smallest remnants of a wallet, a wedding ring, a water logged photograph of a smiling girl.

No, bringing up Pearl Harbor and FDR’s ‘infamy” remark is Kelly’s dislocated reach to try to dig a grave for others, that he himself is now in neck high.

All these profound differences and more, make Rep Mike Kelly’s remark about now sacred Pearl Harbor, not only a false equivalency, it mades one wonder if he is so isolated from actual people who have lived near this tragedy, that he things others are stupid enough to believe The “Kelly Trivialization” of an event that ought ever be treated with utter reverence

With as much bridging and understanding of all aspects as possible, and ever prayerful emphasis on the victims and their families.

Kelly’s president is not a victim. Not a war hero. Not a truth-teller. His president’s disasters are purely of his own making.

CODA
When a child, our old neighbor on the road had lost her precious son on the Arizona. I have never forgotten her lifelong sorrow, her tiny [overheated by oil furnace] living room in our rural outback… her shrine of hand crocheted doilies and dozens and dozens of black and white pictures of handsome, smiling, so very young sailors lining her walls and tables. ‘All of them gone,’ she would say to me. ‘All of them gone.’ ‘Where are they?’ I had at first asked. ‘Under the water,’ she would weep, ‘Under the water in the arms of Mother Ocean.’ I would touch her rough farm-woman hands, and she would tell me the stories of the young lives of all her son’s crew-mates and her dear boy. We cried together. I never knew her son. But I knew his bravery and I knew his mothers’ agony.

Pearl is about thousands and thousands who lost the promise of their progeny, the laughter that would never be heard again, the songs never written, the wedding dances that would never be, the little children never made, the miracles never rising, discoveries and cures and helps never found and offered to the world. This is why these matters of the dead of blessed memory, ought never be bandied about in cheap nor profane ways. The innocent dead are holy.

This my dear friends is an image of the Arizona, brand new. 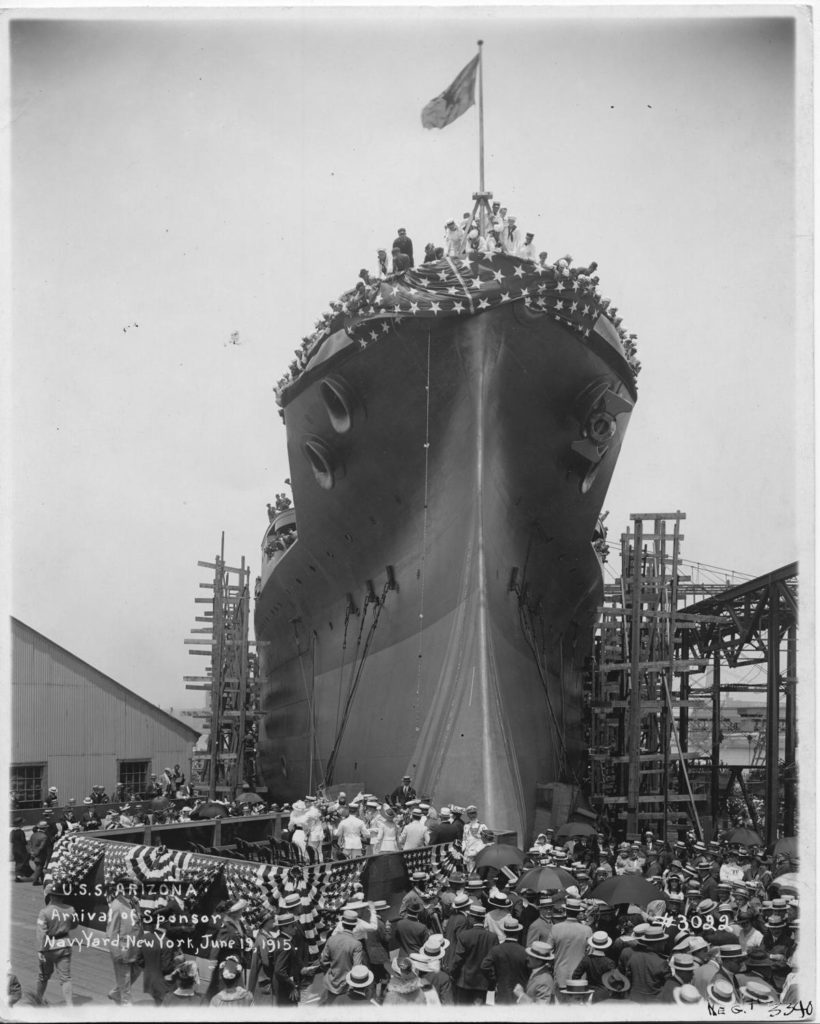 This is an image of the young men of the Pearl Harbor Sailor Band performing the night before the bombing by Japan. The next morning in the bombings, all were lost. 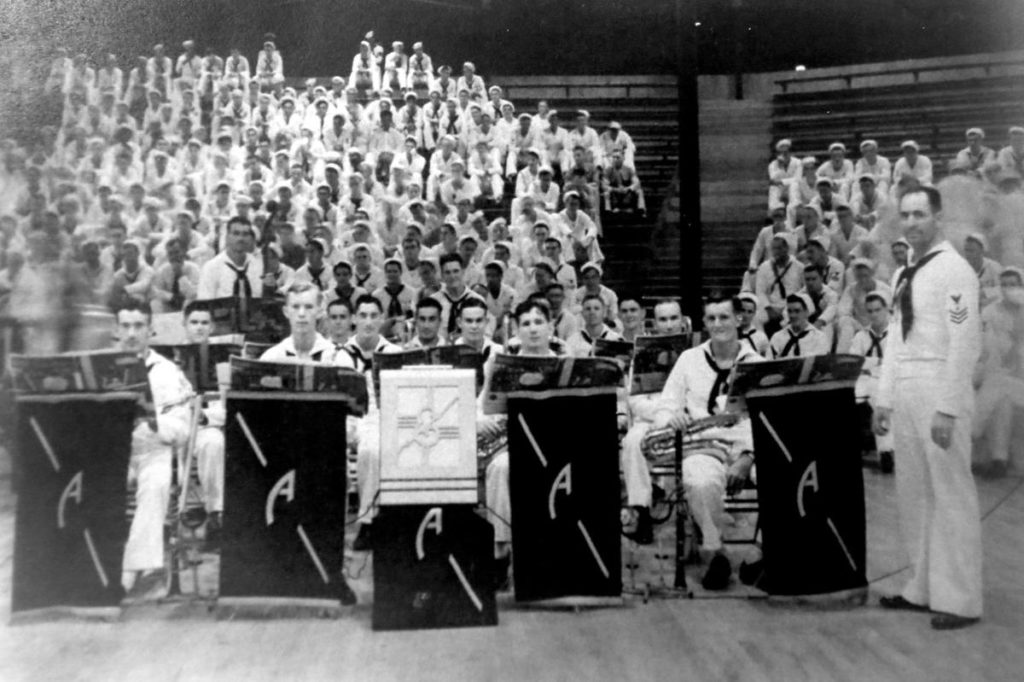 This is an image of the Arizona as she lay wounded. 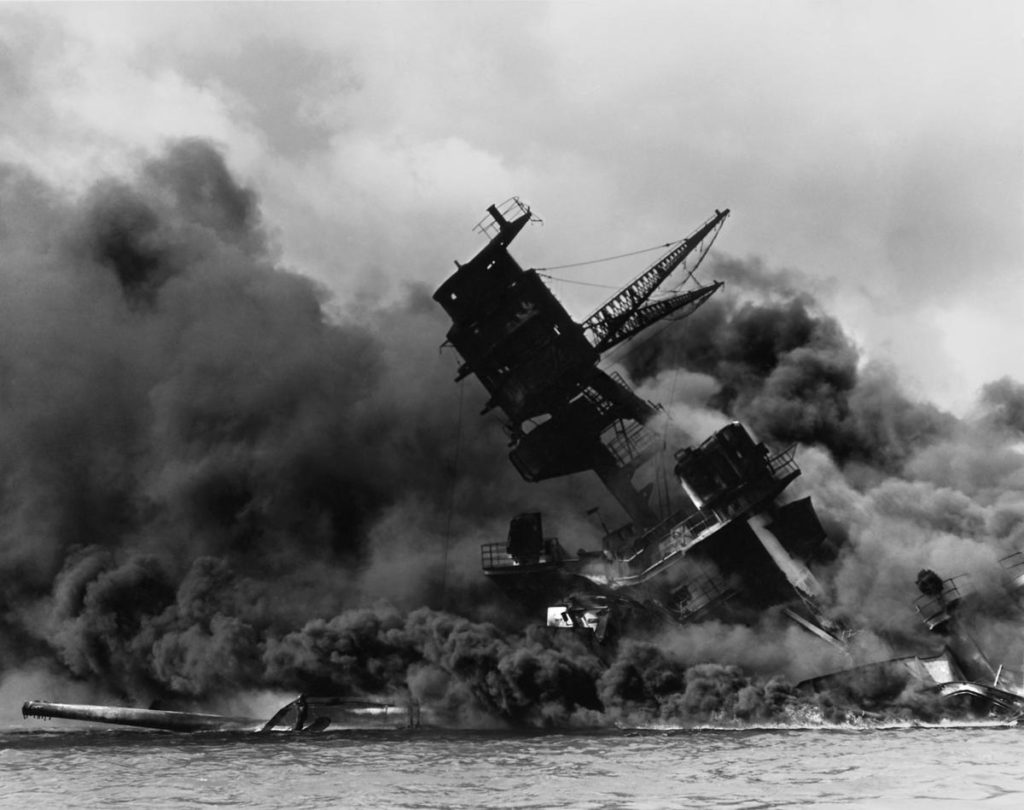 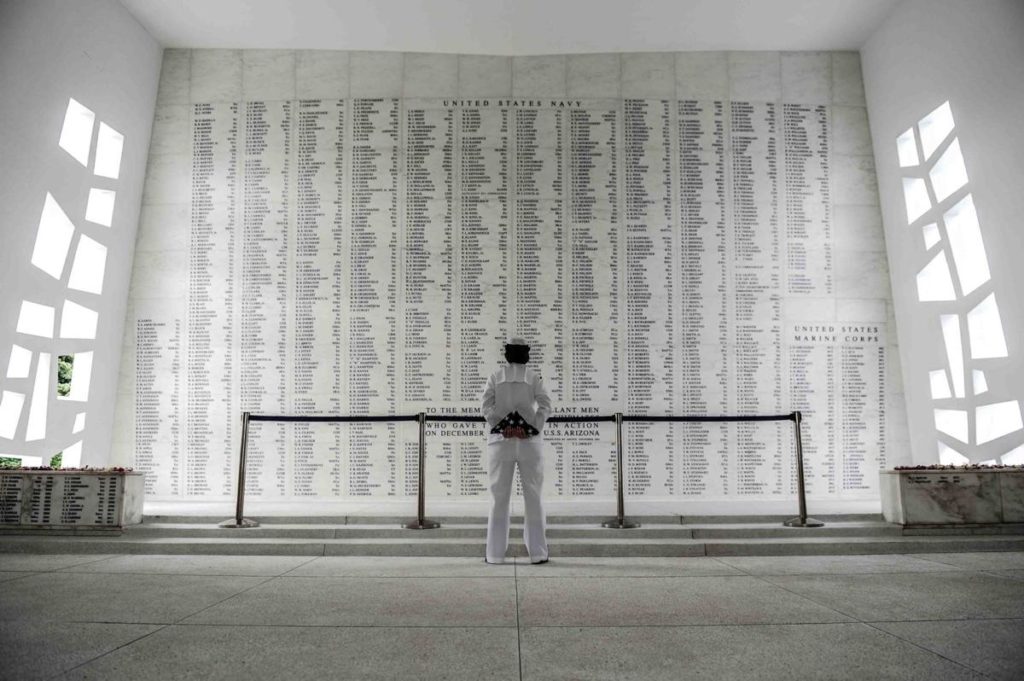 May they all rest in peace.
And may we have Peace on Earth.
Decency and good will to all.

———–
and yes, grandkidlettes have own ideas of ‘art.’ In top pix, the fellow to the left does not have a ‘dandy-lion’ on his head. At least so far as we know. The fellow on the right does not have a mustache at all, unless it’s hidden inside his seeming grim mouth. The two fellows behind Rep Mike Kelly who appear to have fallen asleep while he is talking his Pearl Harbor effort to convince rather than to convict his president, may have been blinking when camera took the shot. The image has been made satirical thusly.