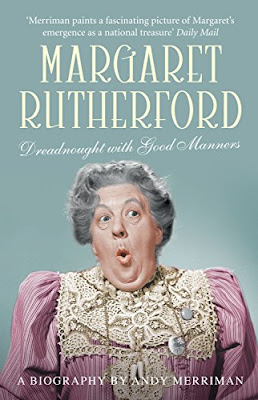 I absolutely adore the acting skills and personality of the late Dame Margaret Rutherford, who for nearly three decades was a major star in Great Britain, as popular there as May Robson was in the United States, or Kathy Bates, to use a more recent comparison.

Her face was unique, both angular and broad, with jutting chin, iconic during the middle of the 20th century. Look at the photos below, catch the one with the cape, a wardrobe choice ubiquitous during her acting career, on the stage and film. Her character was a gale wind, determined, forceful respectability with a hint of dotty-ness, shrewdly polite but brooking no foolishness or disrespect. 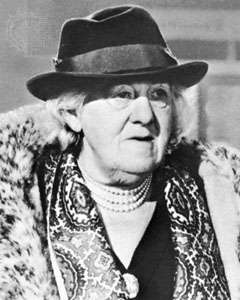 The lady possessed charisma. I envy those who watch her films for the first time: Blithe Spirits, The Importance of Being Earnest, her “Miss Marple” films, particularly Murder She Said and Murder Most Foul (she was not Agatha Christie’s Marple by any stretch but her offbeat, almost comic portrayal of the literary spinster sleuth was so original one can’t help but love the films). She won an Oscar for The VIPs, but in reality that was a reward for a handful of superior films she had not been Oscar-rewarded for.

I also enjoy her role in a more provincial film from the early 1950s, “‘Innocents in Paris.” She interacts more with her real-life husband, Stringer Davis, who was in virtually all her films, and plays, as that was often contracted. They play well together, particularly in her Marple films (which, frankly, she’s best known for in the United States.)

British author Andy Merriman has penned a fine biography of Rutherford. It’s titled “Margaret Rutherford: Dreadnought with Good Manners.” It’s a very detailed account of her life. Not blessed with conventional good looks, it took years of dedication to her acting craft before her career gained steam. There are passages of Rutherford bicycling through Wimbledon and other areas to low-paying teaching jobs during the oft times that her early career stalled. She was persistent, and it paid off as her career gained stream in early middle age on the stage and eventually the screen. 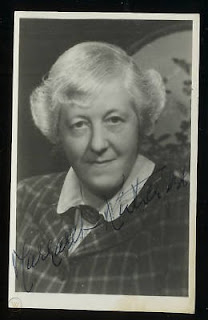 Merriman captures in detail — sometimes to a fault — the ins and outs of Rutherford’s stage work, her movies, her radio performances with the BBC, and television work. I appreciate his respect for the eccentric but loving relationship between Rutherford and her husband Davis. They married in middle age. She outshone him in the business, but there was no resentment. They both loved and needed each other.

As Merriman details, Rutherford suffered from depression. She had a bipolar personality that sometimes led to unwise, impulsive acts outside conventional common sense. It led to excess spending habits that frequently left the couple in rough financial times. On a more serious note, at one time, Rutherford convinced herself to be in a romantic relationship with a singer decades her junior. She made plans for them to run off together. The shocked singer ended his friendship and artistic association with Rutherford. That led her to one of her occasional breakdowns, resulting in shock treatments. Davis (seen below) was always there to help her regain stability. 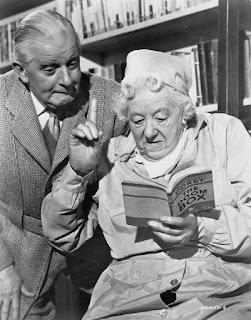 During her life Rutherford feared that a family history of unstable behavior would cause her to lose her sanity. Her father murdered her grandpa. As a toddler her mother killed herself. She was raised by her aunt. Once famous, she was known among her peers as a kind woman, willing to make gestures of generosity. A very young Claire Bloom, a co-star in Innocents in Paris, relates an anecdote of Rutherford’s kindly nature in the book. 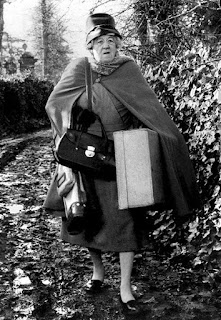 But, please check out a few of her films. They are easy to stream. Essentials are her roles as Madame Arcati in Blithe Spirits and her Miss Marple films. All are available at Amazon. The Marple films play often on TCM. (This review is cross-posted at Plan9Crunch blog.)