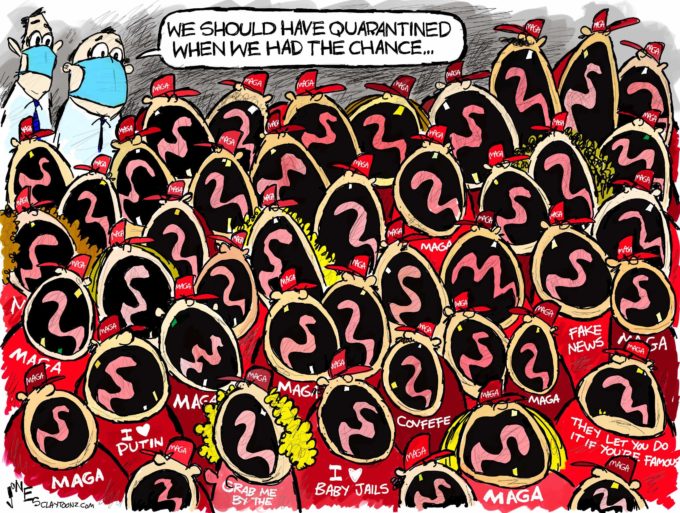 Is MAGA contagious? Before Trump won his party’s nomination, the majority of Republican officeholders were against his candidacy. Lindsey Graham called him a racist. Paul Ryan said his comments were the definition of racism. Nikki Haley said his “siren call” was dangerous. Ted Cruz called him a “sniveling coward.” Marco Rubio made fun of the size of his penis. Now, they’re all infected and they’re giving him whatever he wants. Now, Marco Rubio probably knows the size of Trump’s penis.

The one good thing about the MAGA virus is that it only infects stupid racist people who never had a conscience. If you’re afraid of minorities or anyone who speaks a language that’s not “American,” you’re susceptible to the MAGA virus. If a woman with an opinion intimidates you, it may be terminal. If a factual news report has you screaming “fake news” and calling the free press “enemy of the American people,” you should probably start wearing a human-sized condom. If Vladimir Putin gives you an erection, take two aspirin and call someone else in the morning. I’m not answering.

If you’re a non-white person, the good news is that there is a very low chance you will catch the MAGA virus, unless you’re washing dishes at Mar-a-Lago. For the most part, it only affects white people. Usually, only rural white people. It doesn’t affect urban areas as much. Maybe concrete is a deterrent…or books.
The MAGA virus is very serious and extremely dangerous to our nation. Those affected don’t care about emoluments, patriotism, facts, nepotism, or the U.S. Constitution. They believe in conspiracy theories over facts and believe a reality TV show host who believes you need a photo ID to buy cereal is the best choice to lead the nation.

About 3,700 people are quarantined on a cruise ship in Yokohama, Japan, with 136 of them infected with the Coronavirus. Maybe we should take the same tactic with the MAGA virus.

On a side note: I really think Celebrity Cruises should stop playing “White Rabbit” in their commercials until the quarantined ship crisis in Japan is over. If nothing else, the cruise line’s choosing of that song gives me the feeling I won’t finish their cruise with both kidneys.