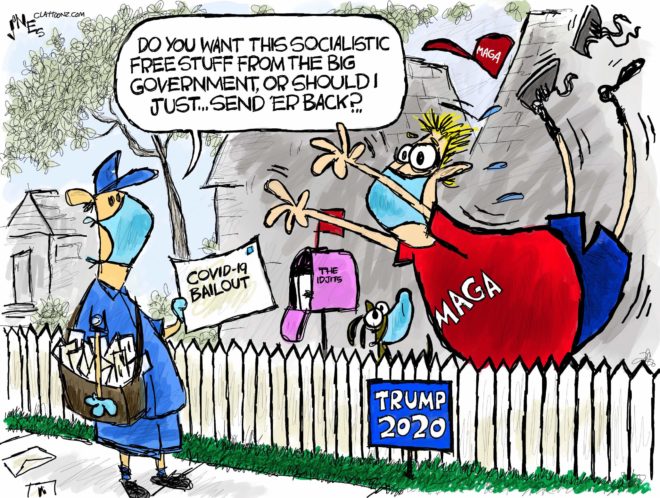 For decades, they proclaimed they were about family values and wouldn’t support any candidate who appeared unethical or messed around on his wife. Today, nope. In fact, many believe Donald Trump, who cheated on wife number 1 with wife number 2 and cheated on wife number 3 and has 5 kids with 3 different women, was sent by God. And maybe God did send Donald Trump but only because he was out of locusts. Frankly, I’d prefer the locusts. If anything locusts probably don’t cheat on their wives.

They used to talk a big game about cutting spending, but in all honesty, Republicans haven’t tried to cut spending or balance a budget since the 1950s.

Republicans always claimed they were better with foreign policy, more patriotic, and had more respect for our military. They were never any good with foreign policy. As for being more patriotic, they would rather deflect and ignore an attack on our democracy if it helps them steal shit. And the military? Today, they support a guy who feuds with Gold Star families, says POWs aren’t heroes, and resists giving money to veteran groups after holding fundraisers, conducted by his campaign, for them.

Republicans always want to reduce spending on welfare and make it as difficult as possible for poor families to receive government assistance. But since social welfare is the only welfare they complain about, it’s not really the spending they have an issue with. Spending on social welfare is about 1 percent of the federal budget. We spend double on corporate welfare and you never hear a Republican demand corporate executives pee in a cup. Hell, they never demand that corporations receiving government assistance don’t buy back their own stock or give executives six-figure salaries and million-dollar buyout options.

But maybe the one thing Republicans hate the most is socialism. It makes them so angry that they’re too upset to look up the difference between socialism and communism. Over the past few years, they claim that democratic socialism will turn us into Venezuela, ignoring that democratic socialist nations are more like Norway and Luxembourg. They argue that all Bernie Sanders wants to do is give everyone “free stuff,” ignoring the fact that they voted for an idiot who literally promised them a free wall.

Now, the Trump administration is trying to work out a plan to give corporations, small businesses, and everyday-working shmoes like me and you cash as quickly as possible. It’s like that J.G. Wentworth commercial and we need cash now, except we’re not in a bus with opera-singing Vikings because that’d be a great way to catch Covid-19 (great story though. “How’d you catch Covid-19?” “I was on a bus with opera-singing Vikings”). The plan, being designed mostly by Treasury Secretary Steve Baby Fishmouth Mnuchin, will cost around a trillion dollars. Former White House Communications Director for 8 minutes Anthony Scaramucci says to really help everyone and to keep the economy from imploding like a Trump casino (my analogy, not his), the government will need a stimulus package of 3 trillion. He’s probably right.

I think there should be some huge conditions attached to these bailouts, especially for corporations. Maybe attach agreements that they don’t use the money to purchase their own stock and that millionaire executives need to take huge pay cuts. And how about no huge severance packages? On top of all that, make sure no bailouts to toilet paper companies because they are not hurting right now.

The reason I think the Mooch is correct is that Mitt Romney’s idea is to give every American $1,000 which seems to be where Fishmouth is going. (EDITOR’s NOTE: The Trump administration and Senate GOPers have agreed to it). That’s a great start. We could all use an extra thousand bucks, but for most people, that won’t even cover one month’s rent.

Andrew Yang, who ran for president in the Democratic primaries, wanted to give every American $1,000…a month. Now, it appears every Republican wants to be in the Yang Gang.

What I want to ask every Republican who loves the idea of this bailout and is praising Donald Trump for it is:

Isn’t this socialism? Isn’t this free stuff? Won’t this turn us into Venezuela? Are you a fucking hypocrite?

I have an idea: Let’s only give to people who didn’t vote for Trump in 2016. Let’s make sure that everyone who ever complained on social media about socialism doesn’t get a check. They won’t mind because they’ve already told us that people who like Bernie’s ideas are lazy, socialism is bad, giving away “free stuff” is stupid, and they don’t want anything to do with it. If they really need to eat and they don’t have money, they can take their guns out in the woods and hunt for their food. They’re not lazy so it shouldn’t be a problem. They can just pull themselves up by their bootstraps.

Or, they can just return what the government gives them and ask that it go towards the wall they love so much and believe is already under construction.

That’s 62 million assholes we don’t have to worry about because they don’t want socialism and “free stuff.” We heard you and guess what. I’m not going to forget you said it.

What I’m looking forward to is the gaslighting they’re about to engage in. I’m excited to hear their reasoning that this isn’t socialism or “free stuff.” How will they explain it’s not welfare when they get it? This is going to be too good. If they can blame Obama for Trump’s disastrous response to the coronavirus pandemic, or that Trump was sent by God, then they can gaslight anything.

Normally, I’d tell Trump supporters they can go eat something else (shit. Bag of dicks. Etc.), but today, I’ll be helpful.

Veteran cartoonist Clay Jones’ work has appeared on CNN and other in major media outlets. Email him at [email protected]