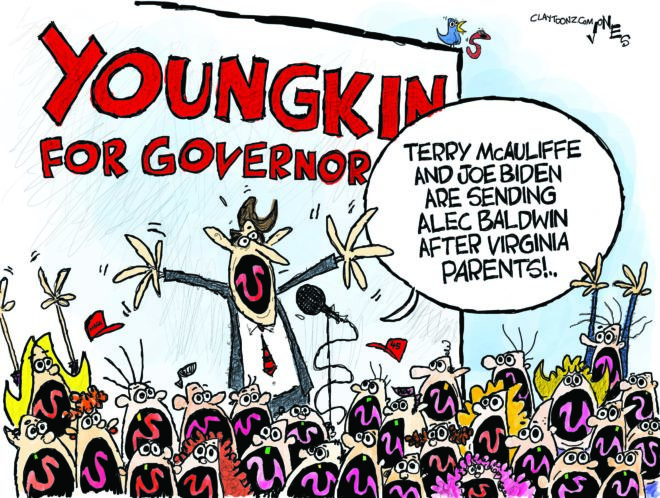 Glenn Youngkin is lying. He learned it from Donald Trump. The bigger the lie a Republican tells, the more other Republicans will believe it. Whether it’s trickle-down works, Trump won, Jewish space lasers, January 6 was a protest, or Terry McAuliffe has the FBI going after parents who speak at school board meetings in opposition of Critical Race Theory, vaccines, or Critical Race Theory which isn’t being taught in Virginia schools.

Youngkin has lied in his campaign commercials that the FBI is targeting parents. Then, he went on two different radio shows and said his opponent, former governor Terry McAuliffe, has called President Biden to ask him to get the Justice Department to go after parents. Why would he do that?

Usually, a lie like that is taken from something else and twisted into a lie. This time, it pretty much comes from nothing except out of Glenn Youngkin’s ass. I’m afraid if he wins, we’ll find out what else is up there. We’ll also also find out just how deep he is up Trump’s ass.

It has only been suggested that the FBI look into threats made by parents against school board members. That’s it. Nothing has happened yet. Glenn Youngkin and other Republicans are defending bullying parents who want a twisted education in an unhealthy environment who are making death threats against teachers.

People are actually buying this too. They’re outraged over Democrats and the FBI going after parents which isn’t happening when they should be outraged that Republicans are still defending terrorists.

Virginia, we don’t like Trump. Don’t let Youngkin fool you into making a Trumper our governor.

And no, it’s not too soon to use Alex Baldwin in a cartoon like this. What is too soon is to be calling him a murderer, which is what a lot of Trump supporters are doing. The thing is, morons, you can’t send someone to prison because you don’t like their politics or you’re still upset he came close to making your racist gameshow host joke of a president look nearly as stupid as he actually is. Also, you don’t know all the details, but it’s not the first time you talked out of your ass.

At the very least, you’re using someone’s death for your political grudge.

I don’t like Republicans, or at least not the ones who have lost all their humanity. There are not enough Liz Cheneys, Adam Kinzingers, or Oliva Troyes left.