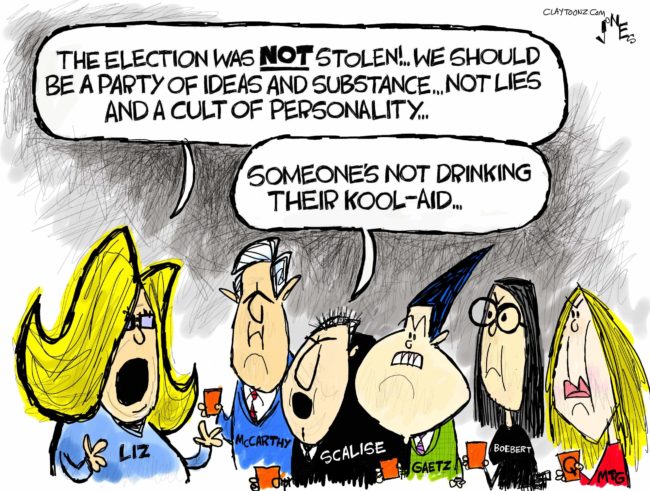 Minority Leader Kevin McCarthy wants his party to retake the House in 2022. He believes the only way to do that, isn’t just by enabling Donald Trump’s lies, but attacking anyone who speaks against his lies.

The GOP already has gerrymandering to help them retake the House. Red states like Texas, Florida, and North Carolina are getting new congressional seats and that will help them too. They’re changing voting laws to make it more difficult for black people to vote, which will also help them. So you would think McCarthy wouldn’t need to debase himself by groveling to the Trump base. Except, McCarthy is a Republican and most of that party has abandoned principles.

And it’s not just members of the House engaging in the Big Lie that Donald Trump won the election and it was stolen from him. Senator Mitt Romney was booed last week at a Republican event in his home state of Massachusetts, or Utah…or whichever one it is this week. They booed him because he voted to convict Donald Trump.

Republicans are pushing the Big Lie and gaslighting the January 6 terrorist attack on the Capitol that Donald Trump instigated. While Democrats want an independent commission to study the attack, McCarthy and Republicans want to deflect by making Black Lives Matter and Antifa “violence” a part of the study.

Here’s a fact: The attack on the Capitol was conducted by white racist terrorists instigated by Donald Trump and Black Lives Matter and Antifa didn’t have a damn thing to do with it.

If Republicans have their way, an independent commission to study the attack on the Capitol will be about as independent as the Arizona recount being recounted by Republicans, Trump goons, GOP candidates who are on the ballots they’re counting, and MAGA terrorists.

Now, Wyoming’s lone representative, Liz Cheney, daughter of Daick, is demanding that the party have principles. Keep in mind, this is a person who verbally attacked LGBTQ in order to get elected and has a lesbian sister. But for Republicans, this is about as ethical as it gets.

The party that cries about “cancel culture” now want to cancel Liz Cheney. Cheney is speaking out against the Big Lie, saying the election wasn’t stolen, and the Capitol attack was Donald Trump’s fault. She said Donald Trump’s false claims are “poisoning our democratic system.” That might be where she messed up because Republicans care more about conspiracy theories than about our democratic system.

Cheney is the number three Republican in the House and survived a vote to remove her a few months ago after voting to impeach Trump. Reportedly, another vote may come up and this time, she’s not expected to survive. Matt Gaetz, before his sex scandal hit, even went to Wyoming in an ugly suit with his hair sticking up like Cameron Diaz’s in “There’s Something about Mary,” to campaign against her. Why is everything with that guy icky?

Steve Scalise, the number two guy, said about Cheney, “This idea that you just disregard President Trump is not where we are — and frankly, he has a lot to offer still.” The idea Steve Scalise can’t disregard a flagrant liar like Donald Trump who engineered a bloody coup attempt, is now where this country should be.

Today, Kevin McCarthy said on Fox News that any effort to get rid of Cheney isn’t about her vote to impeach Trump, but her “ability to carry out the job as conference chair, to carry out the message.” That message is a message of bullshit.

Right now, there is more criticism and condemnation of Liz Cheney for speaking her mind than there is for Matt Gaetz, or Qanon fucknuts Marjorie Taylor Greene and Lauren Boebert. Next year, you can expect Donald Trump to rally against Liz Cheney in her reelection attempt. Right now, Cheney is fighting for her leadership position, but she may not even have a seat in the next Congress while lunatics like Gaetz, Greene, Boebert, and Jim Jordan are still there.

Kevin McCarthy doesn’t not have principles, ethics, or integrity. He attempted to exercise some integrity by blaming Trump for the terrorist attack, then quickly back-peddled when Trump expressed outrage. Then, he flew down to Mar-a-Lago for a Trump photo-op. McCarthy is a coward. He doesn’t actually believe the election lie. He knows Trump lost and Biden won, but he’s too much of a coward to state the truth. He’ll repeat any Trump lie to regain the House. He is worst than your average everyday enabler. He’s a party to the party of lies.

The majority of the party believe Trump won and the election was stolen. They’re idiots.

For me, the Democratic Party is not the solution to everything. I am a liberal but not a partisan. There are plenty of problems with the Democrats and they will never have my loyalty. But the Republican Party has stopped being one that’s just opposite on the ideas, but they’ve become a cult.

The Republican Party would take the presidency, the House, and the Senate, and then stack the courts, despite the fact fewer Americans will vote for them. They don’t care how they get power, just so long as they get it. And they don’t just oppose civil rights, free speech, a free press, women’s rights, reproductive rights, and wanna f–k with elections. No. They have become a party obsessed with worshipping a racist reality TV show host with a dead bleached skunk on his head and who supports terrorists.

The Republican Party will never be a party we can take seriously until they stop being the party of cult worship. And the cult of personality they’re worshiping is a very stupid personality at that.

The people enabling a lying racist who tried to overturn an election through a bloody coup attempt are the ones who should be up against the wall, not the person telling the truth.