Left and Right Join Together To Oppose Militarization Of Police 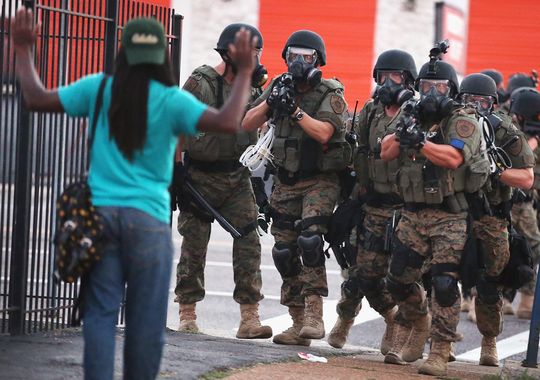 The militarization of the police force seen with the shooting in Ferguson, Missouri has led to another case of portions of the left and right joining together. This includes a push for legislation in Congress with the backing of both the American Civil Liberties Union and Gun Owners of America.:

Groups on the left and right are uniting behind calls to end what they say is the rise of a “militarized” police force in the United States.

They say the controversial police tactics seen this week in Ferguson, Mo., are not isolated to the St. Louis County Police Department and warn the rise of heavily armed law enforcement agencies has become an imminent threat to civil liberties.

“What we’re seeing today in Ferguson is a reflection of the excessive militarization of police that has been happening in towns across America for decades,” said Kara Dansky, senior counsel for the American Civil Liberties Union (ACLU).

The ACLU is aligned with Sen. Rand Paul (R-Ky.) and groups on the right who are calling for an end to a controversial Defense Department program that supplies local police departments with surplus military equipment, such as armored tanks, machine guns and tear gas.

According to the Defense Logistics Agency, more than $4 billion in discounted military equipment has been sold to local police departments since the 1990s.

“Why are those guns available to the police?” asked Erich Pratt, spokesman for the conservative Gun Owners of America. “We don’t technically have the military operating within our borders, but they’re being given the gear to basically operate in that capacity.”

Gun Owners of America and the ACLU are both backing a forthcoming bill from Rep. Hank Johnson (D-Ga.) that would curtail the sale of DOD weapons to local police departments.

More libertarian factions of the Republican Party are speaking out on this issue:

The killing of 18-year-old Michael Brown by a police officer in Ferguson, Mo., has produced a rare and surprisingly unified response across the ideological spectrum, with Republicans and Democrats joining to decry the tactics of the city’s police force in the face of escalating protests.

Most notably, the reactions reflect a shift away from the usual support and sympathy conservatives typically show for law enforcement in such situations. Although possibly unique to the circumstances of the events in Missouri this week, the changing reaction on the right is clear evidence of a rising and more vocal libertarian wing within the Republican Party.

No better sign of that came Thursday than in an article by Sen. Rand Paul (R-Ky.) published on Time’s Web site.

“If I had been told to get out of the street as a teenager, there would have been a distinct possibility that I might have smarted off,” he wrote. “But, I wouldn’t have expected to be shot.”

In his piece, Paul criticized what he called the growing militarization of local police forces. “There is a legitimate role for the police to keep the peace,” he wrote, “but there should be a difference between a police response and a military response.”

This comes as a change from what we generally expect from Republicans:

Since Richard M. Nixon made cracking down on crime a central issue of his 1968 presidential campaign, Republicans have held themselves up as the alternative to a Democratic Party they have derided as soft on issues of law and order. But an appetite for changes in the criminal justice system has been building among Republicans, many of whom believe the tough-justice approach has run its course.

Mr. Paul, Senator Rob Portman of Ohio and Representative Paul D. Ryan of Wisconsin are among those who say that the federal and state governments need to rethink the way convicts are sentenced and imprisoned, arguing that the current system is inhumane and too costly.

Mr. Paul’s remarks on Thursday were similar to those of other leading conservatives who have weighed in on the events in Ferguson.

“Reporters should never be detained — a free press is too important — simply for doing their jobs,” Senator Ted Cruz, Republican of Texas, wrote on his Facebook page on Thursday, reacting to news that journalists from The Washington Post and The Huffington Post had been held by the police. “Civil liberties must be protected, but violence is not the answer.”

Erick Erickson, a conservative writer, took to Twitter to question why the police needed to display so much firepower. “It is pretty damn insane that people who spend all day writing speeding tickets,” he wrote, “hop in tanks with AR-15s at night.”

But not all conservatives are as concerned about the civil liberties aspects:

Other conservatives have focused on instances in which chaos has broken out in the streets. Images and headlines on The Drudge Report and Breitbart.com have singled out acts of violence among demonstrators and shown looters breaking store windows…

In much of the conservative news media, the protesters in Ferguson are being portrayed as “outside agitators,” in the words of Sean Hannity, the Fox News host.