Posted on June 16, 2021
You are here: Home / Featured / LAUD LIZ CHENEY FOR DEFENDING TRUTH, BUT DON’T FORGET HER FATHER’S LIES 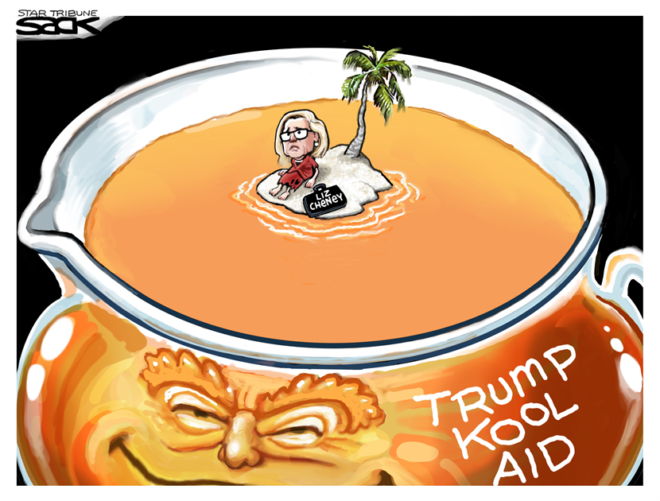 Kudos to Wyoming Rep. Liz Cheney. Her House GOP leadership post hangs by a thread because she refuses to mouth Trump’s Big Lie about a stolen election, and Wednesday she boldly framed the stakes: “The Republican Party is at a turning point, and Republicans must decide whether we are going to choose truth…”

But we also need to recognize the inconvenient truth that she is rebelling against the cult of disinformation that her father helped build. Dick the veep was a notorious liar who helped turn the GOP into the monster that’s poised to devour his daughter.

Lest we forget – it was barely two decades ago – Republican leaders on Capitol Hill were steadfastly silent while Vice President Cheney lied us into the disastrous war in Iraq. He shaped the intelligence on Iraq to reflect his post-9/11 fixation. As our British allies wrote about Cheney’s march toward war, in a now-infamous 2002 memo, “the intelligence and facts were being fixed around the policy.”

But rather than revisit all of Cheney’s shameless BS, I’ll simply detail what I consider his most flagrant departure from truth. He flogged one particular lie for years, even as the death toll mounted, and virtually no Republican ever uttered a word of protest in defense of factual reality.

Cheney repeatedly insisted, after 9/11, that Saddam Hussein was in close cahoots with Osama bin Laden. His assertion was absurd – Hussein was a secular tyrant with no love for Muslim extremists, and President Bush’s Daily Brief of Sept. 21, 2001 stated that there was “scant credible evidence” of any “significant collaborative ties” between Saddam and Osama.

But Cheney didn’t care. On “Meet The Press,” in December 2001, he declared that 9/11 ringleader Mohamed Atta had met in Prague with a Saddam secret agent. In Cheney’s words, “It’s been pretty well confirmed.”

But Cheney had seized on a rumor that U.S intelligence officials could not confirm. In April 2002, inside sources told Newsweek: “U.S. intelligence and law enforcement officials now believe that Atta wasn’t even in Prague at the time.” But Cheney persisted anyway. In September 2002, he said it again on Meet the Press: “We have reporting that places (Atta) in Prague with a senior Iraqi intelligence official a few months before the attack.”

Fast forward to June 2004. That’s when the bipartisan 9/11 Commission rebuked Cheney: “We have examined the allegation that Atta met with an Iraqi intelligence officer…Based on the evidence available – including investigation by Czech and U.S. officials, plus detainee reporting – we do not believe that such a meeting occurred.”

But again Cheney persisted. Shortly after the 9/11 Commission released its ’04 report, during an appearance on CBS News, Cheney was asked about the Atta yarn. The questioner confronted Cheney with his own words: “Let’s get to Mohamed Atta for a minute…You have said in the past that (the Atta-Iraq link) was quote, ‘pretty well confirmed.’” This was Cheney’s response: “No, I never said that. I never said that…Absolutely not.” Now he was lying about his lie, which had been captured for posterity on Meet the Press.

No wonder Cheney left the vice presidency with an approval rating of 13 percent. He was the prime driver of a war built on lies, but for years there was barely a whiff of dissent within the GOP. And to the best of my knowledge, I don’t ever recall Liz calling out her dad and declaring, amidst all the needless death and suffering in Iraq, that the Republican party had reached a crossroads and needed to stand for truth.

Granted, family fealty trumps all. But before we canonize her current profile in courage, we need to contextualize it, to recognize that the GOP’s cult of disinformation did not blossom overnight. It was seeded by serial dissemblers like Dick Cheney, and it’s a shame that his own daughter is poised to become collateral damage.