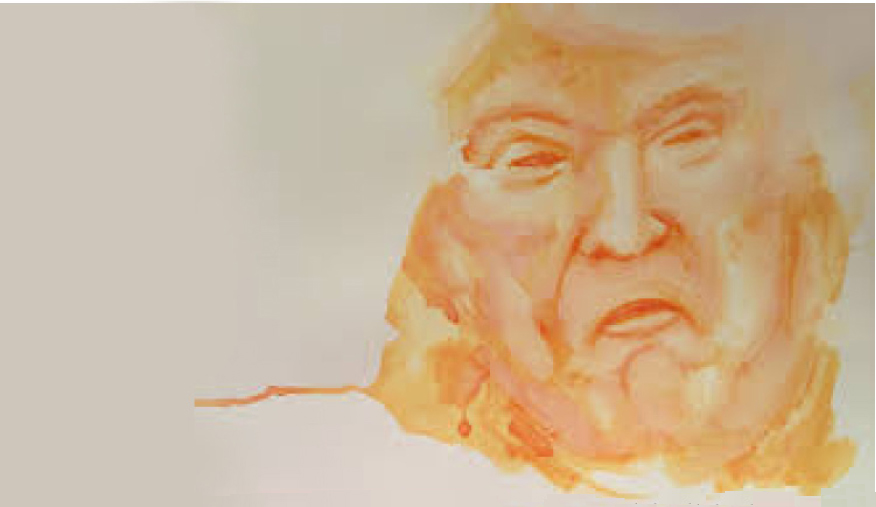 “Some folks are born silver spoon in hand. Lord, don’t they help themselves? But when the taxman comes to the door…” – “Fortunate Son”, John Fogerty, 1969

Barack Obama came to office in part because he was the physical embodiment of the ideas he advanced. His speeches were eloquent, and the rhetorical devices he used to convey his message made him the living exemplar of a politician campaigning in poetry. In his speech of 2008 entitled “A More Perfect Union”, Obama paraphrased William Faulkner’s phrase, “The past is never dead. It’s not even past.”

Our wish for Democracy is a wish for utopia, and we continually dream that someday America will fulfill its promise. And the “we” whom it seeks to make equal is dependent upon a document that was conceived to be, above all else, a bulwark against monarchy, against tyranny, against unitary rule.

But with this Republican Party, the party of Mitch McConnell and Donald Trump, what we have are cunningly deceitful ideologies that mask what are, in fact, naked power grabs to achieve this party’s own unitary rule. Their crusade for “small government” is cover for dissolving the principle of federalism entirely, currently evidenced by a “soft genocide” conducted by a complicit Republican resistance to using the resources of Washington to “provide for the common defense” of a nation facing mass death from a virus that ravages it – an epidemic expected to kill hundreds of thousands, and perhaps millions of US citizens.

And the GOP defaults to their “state’s rights” argument, with the knowledge that individual states lack the resources to protect its citizens from this unseen enemy. The well-documented pleasure Donald Trump takes in engaging in Hunger Games tactics is shared by a complicit GOP, as blue states are forced to compete with a federal government to acquire crucial materiel to fight this epidemic on their own. And red states are urged to defy our federal government’s own scientific guidelines for social distancing by branding compliance as submission and the reopening sectors of the states as seeking freedom from tyranny. Instead of enacting policies that will flatten the curve of this current epidemic, Donald Trump and his Republican Party have backed up their political dump truck and flattened America instead.

The Republican Party’s decades-long crusade for lower taxes are cover for massive thefts from the working class, and a retreat into a 21st Century version of feudalism, where taxes are imposed upon a powerless working class to provide for a parasitic aristocracy of feudal corporate lords.

And the mandate to “establish justice”, as declared in the Preamble of the Constitution, is now a Republican obsession to replace impartiality with extreme partisanship on every court in the land. We now await a Supreme Court decision that decides whether an American President is subject to the laws of the United States, or is, by the powers vested in him, a sovereign head of state. And with a Supreme Court dominated by Republican ideologues, “we the people” wait in fear that a soft coup by the Republican Party will have been successful – that self-rule will have been overthrown by the unitary rule of an elite class of plutocrats.

Now, the government mandated by our Constitution no longer seeks to provide for the common defense; no longer promotes the general welfare; no longer seeks to establish justice, or insure domestic tranquility – because the Republican Party no longer seeks a more perfect union. Republicans are predatory in precisely the way that Donald Trump is predatory, and that’s why he is the head of their party; he speaks directly for them.

Throughout our history, the ideal of democracy was to establish equality among its citizens. “We the people of the United States” announced to the world that a new experiment was about to be launched. But the debate as to whom the “we” refers has been the substance of endless strife during our 244 years of self-government. Alexis de Tocqueville studied early America in his 1835 book entitled: “Democracy in America” and identified several features of this “exceptional” democracy that were unique. He wrote “If royalists [European Monarchists] could see the internal functioning of this well-ordered republic, the deep respect its people profess for their acquired rights, the power of those rights over crowds, the religion of law, the real and effective liberty people enjoy, the true rule of the majority, the easy and natural way things proceed, they would realize that they apply a single name to diverse forms of government which have nothing in common. Our republicans would feel that what we have called the Republic was never more than an unclassifiable monster…covered in blood and mud, clothed in the rages of antiquity’s quarrels.”

Ours was an experimental society in 1776, with a government comprised of differing factions united to attain social equality within the strictures of a social contract of superb originality. This is not so today. As the Democratic Party struggles to right our ship of state and restore our liberal democracy and its prized institutions, the Republican Party seeks to return us to de Tocqueville’s European republics – the era when societies were: “covered in blood and mud, clothed in the rages of antiquity’s quarrels”. The Republican Party has become a party of right-wing extremism, and its policies are to the right of most extremist groups now operating in Europe.

If America’s Supreme Court rules that the American president is not above the law, and that his financial history can be investigated by a new Congress in 2020, then both Donald Trump and the Republican Party will have a hard time explaining to investigators the two sets of books they’ve been keeping on our American republic for decades.

Donald Trump and his Republican Party are conducting a coup against American democracy, and like other dictators throughout history, mass casualties, like those of this epidemic, are merely collateral damage.  And if you are stung by the notion that we are in the grips of a coup, remember Faulkner’s words: “The past is never dead. It’s not even past.”

Note: “La Bilancetta” – The Little Balance – is a short treatise written by Galileo in 1586 at the age of 22. The subject was known as “The Golden Crown of King Hiero II.