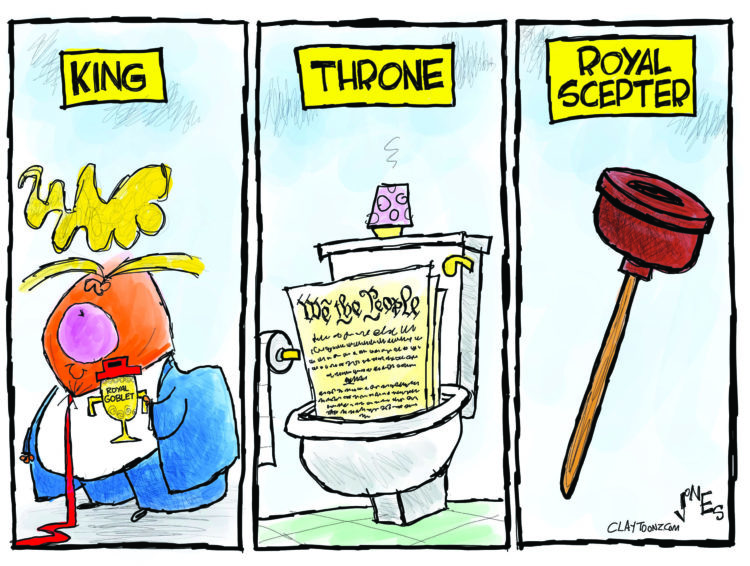 Donald Trump has called for terminating the United Constitution and he’s basing this on the release of the so-called Twitter Files.

Let’s back up. Donald Trump lost the 2020 election. He tried to steal it after he lost it. He spread a dozen conspiracy theories and his lawyers lost over 60 court cases in multiple states trying to overturn the election he fairly lost. He and his goons tried to install fake electors. He tried to get his vice president, Mike Pence, to refuse to certify the election. He called the secretary of state in Georgia and demanded that he “find” him the votes he needed to defeat Biden in that state, even though those votes didn’t exist. When all that failed, he had white nationalist terrorists attack the Capitol in order to stop Congress from certifying the election. Trump lost the election. There is no evidence that disputes that.

In October 2020, The New York Post ran a story about Hunter Biden’s laptop that didn’t really produce anything. The scandal was that Hunter owned a laptop. Nothing on it could be confirmed or authenticated at the time and even the reporters who wrote the story didn’t want their names on it. Twitter blocked the account of the NY Post and others that were sharing the story, or nude photos that were supposedly of Hunter Biden.

For the past two years, MAGAts have been screaming that this was election interference by Twitter and the Democrats and if the story hadn’t been suppressed, then Donald Trump would have won the election.

Over the weekend, Elon Musk released the Twitter Files that were analyzed by independent reporter Matt Taibbi. They were released in over two dozen tweets. What they confirmed was that Twitter had an internal discussion over whether to allow links to the story on its platform or not. The CEO of Twitter wasn’t aware of this discussion. The Biden campaign, the Trump White House, and the Trump campaign were all in contact with Twitter over what stories they should allow and suppress. The main thing the Biden team wanted was for all pornographic photos of Hunter to be removed from Twitter.

The New York Times wrote, “Mr. Musk and Mr. Taibbi framed the exchanges as evidence of rank censorship and pernicious influence by liberals. Many others — even some ardent Twitter critics — were less impressed, saying the exchanges merely showed a group of executives earnestly debating how to deal with an unconfirmed news report that was based on information from a stolen laptop.”

Now, Republicans are screaming that this proves the election was stolen and major corruption was in play. What this really proves is that there are now two things that Republicans can’t tell you the contents of, Hunter’s laptop and the Twitter Files. Before the release, Elon tweeted, “This will be awesome” with a popcorn emoji.

Two things: Twitter is not the government. Joe Biden was a candidate when the NY Post story ran, not the president. This is not government suppression.

But now Donald Trump is howling on his platform that the Twitter Files prove the election was stolen, there should be an immediate new election, or he should be reinstated, and that the Constitution should be terminated.

Trump “truthed,” “A Massive Fraud of this type and magnitude allows for the termination of all rules, regulations, and articles, even those found in the Constitution.”

Donald Trump wants to be handed the presidency. He wants to redo the 2020 election now, but he already lost that one. Or better yet for him, he just wants to be “reinstated.”

Donald Trump used the word “terminate” in regard to rules, regulations, and articles in the Constitution.

So, now where are all his MAGAts who claim they’re constitutionalists? Where are their condemnations of Trump’s call to terminate the Constitution of the United States of America? Where are the Republican voices condemning his anti-American demands?

Donald Trump’s disrespect and disregard aren’t new and neither is the GOP’s enabling of it. What is new is that Donald Trump has specifically called for the “termination” of the United States Constitution while running for president. The frontrunner for the nomination of the Republican Party presidential candidate wants the Constitution destroyed. The thing is, they should have kicked Trump to the curb when he ordered an attack on the Capitol and tried to overturn the last election. Continuing to enable Donald Trump is unAmerican. Supporting Donald Trump is treasonous.

You are NOT pro-America or pro-Freedom, or a constitutionalist by supporting the man who wants to terminate the Constitution. We elect presidents in this nation, we don’t appoint them

If Donald Trump somehow wins or takes the 2024 election, the Constitution will go bye-bye…and Republicans and MAGAts will support that.