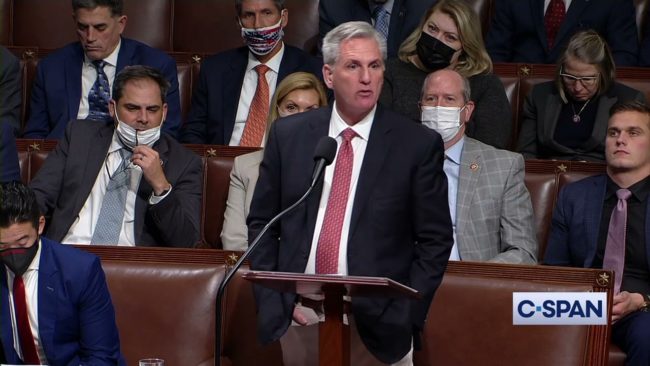 McCarthy gave a record-breaking 9 hour speech in opposition to the Biden administration’s Build Back Better plan, which passed several hours later. He and his talkfest immediately became a punchline on Twitter. Expect late night TV comedians and comedy club comedians to gleefully jump into the fray.

— Knowlton University (we do not confer degrees atm) (@VladaKnowlton) November 19, 2021

I must admit Kevin McCarthy has accomplished one thing. America is no longer woke.

SNL writers just given their cold opening on a silver platter

If you took the worst orator in the world

Gave him the worst speech in the world

That would be a lot like listening to Kevin McCarthy tonight.

This speech by @GOPLeader is the longest month of my life.

Kevin McCarthy stood up at the lectern for 8 hours — which is, incidentally, the only time Kevin McCarthy has ever stood for anything.

There are fissures in the earth's crust that spew overheated gasses more coherently than Kevin McCarthy.

Everyone after Kevin McCarthy’s speech. pic.twitter.com/OzIfHJPEVp

I’ve given birth and it was less painful than Kevin McCarthy’s speech.

You know, @GOPLeader's speech is so long at this point, we lost the extra hour we got for Daylight Saving. pic.twitter.com/DNq0xBQqfR

.@GOPLeader, at this rate we’ll miss the lunar eclipse. https://t.co/1pHOH5Y5J8