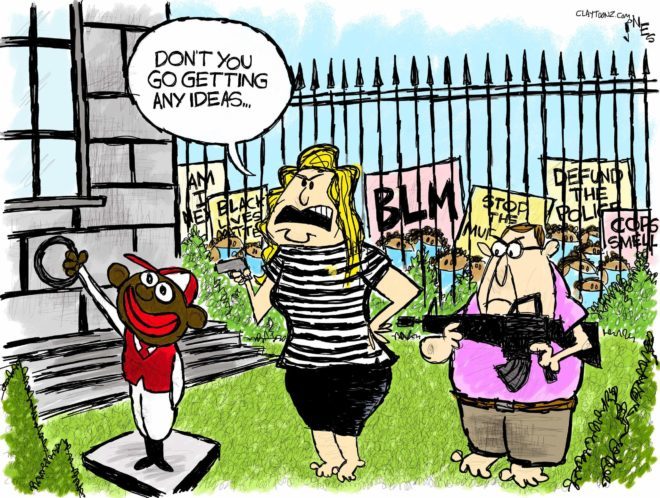 If you’re on social media, that’s probably how you became aware of this story.

This story started because St. Louis Mayor Lyda Krewson publicized the names and addresses of her constituents who had written to her about defunding the police department during a Facebook Live stream. Protesters were on their way to her house, in a rich and snooty neighborhood, to let her know how they felt about that. Along the way, they encountered this charming couple.

Mark and Patricia McCloskey, who are personal injury lawyers, went out onto their lawn to point weapons at the protesters as they passed by. They were identified by St. Louis Today because, in 2018, they were featured in St. Louis Magazine about finishing renovations to their midwestern palazzo. What the hell is a palazzo?

I typed and searched for “Ken and Karen.” Bingo!

What’s a Ken and Karen? Ken is a male Karen. What’s a Karen? I’m glad you asked.

A Karen is a pejorative term for an older privileged obnoxious entitled woman who demands to get her way. The Urban Dictionary describes it as “rude, obnoxious and insufferable middle-aged white women.” A male of this species is often referred to as a “Ken” or a “male Karen.” “Man Karen” works too.

I know three Karens. I’m not sure about one of them but two are definitely NOT Karens. One is a fabulous musician who has released a couple of albums and whose first performance at SXSW was ruined by the coronavirus. She’s definitely NOT a Karen. The other is like a sister to me, thinks like I do on just about everything with politics, and she’s also not white. Well, maybe a little white. She’s all mixed up. She’s NOT a Karen.

But this pair of Karens in St. Louis are Karens. How entitled are these racist mansion dwellers? They were able to point loaded weapons at peaceful protesters and not be charged. In fact, a police report was filed because the protesters are accused of breaking through a gate and walking down a private street, and in this report, the two Karens are listed as…wait for it…victims.

How are they victims? Because a bunch of black people walked in front of their snooty-ass house? Oh no! Black people! Get the guns. Don’t bother putting on shoes….and yes, Rambo would wear a pink shirt, but tuck it in. Get out there and point!

In fact, there aren’t any reports of any homes being vandalized along the way. So why were the Karens justified to stand on their lawn, not just with weapons, but pointing them at human beings who were merely walking past their house? Oh yeah. Those human beings were black. If Ken and Karen have any black friends, I hope they never shoot them.

Also, you may be a Karen if you own a palazzo, whatever the hell that is.