Posted on May 3, 2021
You are here: Home / African-Americans / John Lewis: His Final Words 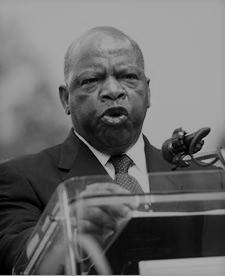 Today, “the Conscience of the Congress” and civil rights giant, John Lewis, will be laid to rest.

Shortly before his death, he wrote an essay which he gave to New York Times Editor Kathleen Kingsbury to be published on the day of his funeral.

Today, his words appear at The Times under the title “Together, You Can Redeem the Soul of Our Nation”:

Addressing mainly a younger generation of Americans, as his “time has now come to an end,” Lewis praises them:

You filled me with hope about the next chapter of the great American story when you used your power to make a difference in our society… Around the country and the world you set aside race, class, age, language and nationality to demand respect for human dignity.

But he also warns:

If we are to survive as one unified nation, we must discover what so readily takes root in our hearts that could rob Mother Emanuel Church in South Carolina of her brightest and best, shoot unwitting concertgoers in Las Vegas and choke to death the hopes and dreams of a gifted violinist like Elijah McClain.

When you see something that is not right, you must say something. You must do something. Democracy is not a state. It is an act, and each generation must do its part to help build what we called the Beloved Community, a nation and world society at peace with itself.

And he repeats his now-famous words about “trouble”:

Ordinary people with extraordinary vision can redeem the soul of America by getting in what I call good trouble, necessary trouble. Voting and participating in the democratic process are key. The vote is the most powerful nonviolent change agent you have in a democratic society. You must use it because it is not guaranteed. You can lose it.

He once again urges, “answer the highest calling of your heart and stand up for what you truly believe,” and passes the torch, “Now it is your turn to let freedom ring.”

Lewis hopes that historians will say that “it was your generation who laid down the heavy burdens of hate at last and that peace finally triumphed over violence, aggression and war.”

“So I say to you, walk with the wind, brothers and sisters, and let the spirit of peace and the power of everlasting love be your guide,” the Conscience of Congress concludes.