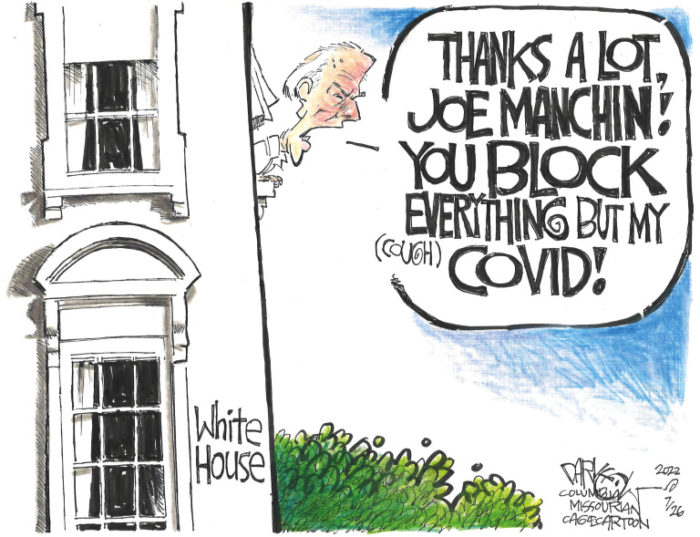 Confused? One Joe is President. Biden. Elected. Legitimately. The other Joe is trying to play President. Manchin. He’s been reasonably successful.

The more dirt he rubs in people’s faces, the more they bow down to him. It seems as if he’s taken a page from the Trump playbook. Be outrageous. Offend people. And they’ll come running to your door to kiss your ring.

He makes the rules. He has large hands. They take a lot. And give a little. Progressive media rolls over backwards when Manchin says something encouraging. They quote him from here to West Virginia.

Wipe the dirt out of your eyes and read about a Democratic Senator flying to Texas from the east coast to attend a Republican fundraising event for guess who? You got that one right. Joe Manchin.

Continue to read. He fills his pockets with oil money much of which greases the Republican’s pockets.

The many hats he wears say Republican lackey one day and Democratic Leader the next. Maybe even on the same day.

As offensive as this is, what’s more objectionable is how the Democrats roll over like puppy dogs when he gives them a bone.

I guess it’s no surprise. Make nice to the Democrats and you’ll get almost anything you want. They’ll whine and complain but you’ll get your way. They don’t anticipate problems, they wait until they come their way. The voting issue is a classic example. There was plenty of advance notice, months, maybe longer, but they procrastinated until now. Look at the mess we’re in. The Supreme Court is equally troubling. Plenty of advance notice. Going back to the appointment of Clarence Thomas.

Maybe President Manchin should hang one of his hats for a longer period, back home. West Virginia receives the fourth most amount of federal funds of any state. It comes to over $7,000 per person. They’re in desperate need of better supervision of those bucks. Where are you Joe? You’re so concerned about getting the most for your money,

why not look in the mirror before you advise others how to allocate their money?

Democrats. You’ve got to fight for things you believe in. The Manchins of the world are here today and gone tomorrow. There should be limits to how much you can kiss-up to people like him. Compromise is one thing. Acquiescing to win a battle can be short-lived and make you vulnerable to lose the war. This should be a team effort. If he wants to be part of the team, WELCOME. If not, you’ll lose him sooner than later. Let him be an Independent. Let him join the Republicans. See how far he’ll get. No dictating there. They have one of those already.