Jed Clampett shouldn’t have listened to his kinfolk. The Ballad of Jed Clampett is one of the most famous American TV theme songs. People who grew up watching The Beverly Hillbillies probably have that song’s lyrics memorized.

Here is that song’s second stanza:

“Well the first thing you know old Jed’s a millionaire,
Kinfolk said Jed move away from there
Said Californy is the place you ought to be
So they loaded up the truck and moved to Beverly.”

In case that you have never seen it, here is the pilot episode of The Beverly Hillbillies:

WARNING: Watching the pilot episode of The Beverly Hillbillies can result in one rolling on the floor laughing one’s butt off.

Anyway, Jed shouldn’t have listened to his kinfolk and moved to “Californy”. The reason is contained in a National Geographic article published on 15 February 2014.

Here are the first three paragraphs of that article:

A millennium ago—just yesterday, in geologic time—Native Americans waited all winter for rains that never came. They waited the next winter and the next. Then the marshes of their sacred San Francisco Bay turned from cattails to salt grass. Fishing declined and the Native Americans could no longer rely on the bounty of the bay. Finally, they left, hungry and thirsty, in search of water.

Now, as modern Californians hope for fierce storms to break a dangerous dry spell, the questions arise: Is the current drought just an aberration? Or might it signal the beginning of a more fearsome era, with echoes of the ancient drought that uprooted Native Americans? Is it a megadrought?

Most scientists sidestep a yes or no answer. But they agree that the past century has been unusually moist—and warn that California is now vulnerable to a drought that is measured not in years, but decades. Perhaps even centuries.

What with the western USA’s climate returning to its pre-Columbian state, living in California isn’t necessarily a good idea.

The same is true about living in Texas. That state’s politicians like to boast that their state is better than California, but that isn’t true when it comes to the available supply of potable water.

The situation in Texas is only going to get worse. To understand why, take a look at this weather-satellite image of the USA:

The image reveals the climate boundary (a.k.a. dry line) that separates the wetter eastern USA from the drier western USA.

On 11 April 2018, the Yale School of Forestry & Environmental Studies published an article titled A North American Climate Boundary Has Shifted 140 Miles East Due to Global Warming.

Here is that article’s beginning paragraph:

In the late 1800s, geologist and explorer John Wesley Powell first described a clear boundary running longitudinally through North America along the 100th meridian west that visibly separated the humid eastern part of the continent from the more arid western plains. Now, 140 years later, scientists have confirmed that such a sharp climatic boundary exists and that it is slowly shifting east due to climate change — a change that scientists say could have significant implications on farming in the region. 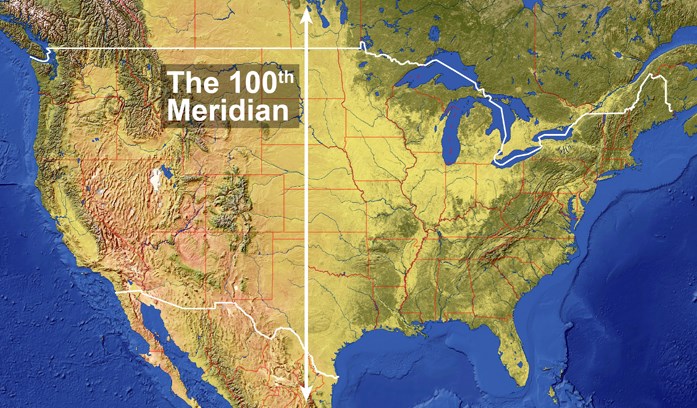 The Ozarks – Jed Clampett’s homeland – are east of that climate boundary, and they still get plenty of precipitation, which is why Jed would have been better off remaining there.

Featured Image is a screenshot from the pilot episode of The Beverly Hillbillies.