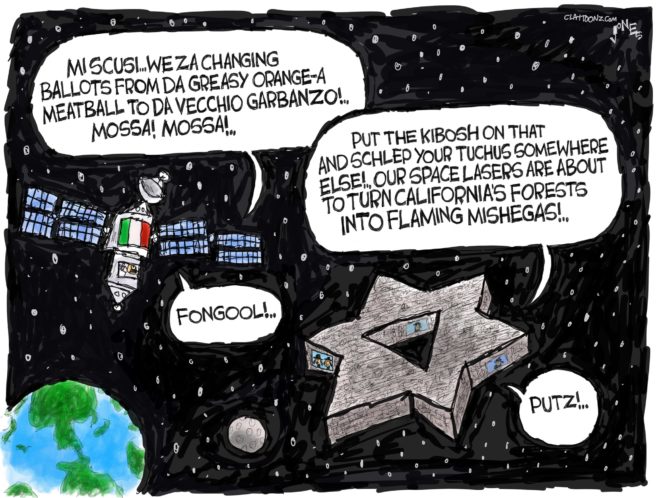 I imagine space has to be really tight just outside our planet’s atmosphere. In addition to the International Space Station and the still-under-construction Chinese space station (with three astronauts currently on it), there are about 2,000 active satellites, 3,000 dead satellites, and over 34,000 pieces of space junk orbiting our planet. And if you think all that space junk is a catastrophe waiting to happen (there’s a one in 3,200 chance you may be hit in the head by a piece of falling space crap), wait until the ballot-changing Italian satellites duke it out with the Jewish space lasers.

You do remember the whole thing about Jewish space Lasers. It was a conspiracy theory pushed by Marjorie Taylor Greene, the congressperson who’s also a member of the Qanon cult, in addition to being in the Trump cult.

Qanon believes there’s a deep state organization controlling our government that consists of Satanic cannibalistic pedophiles who, when not eating babies and drinking their blood, are peddling them in a child-sex ring out of Washington pizza parlors (still better than pineapple on pizza). They also believe Donald Trump is the one who’s going to defeat this Satanic cabal of baby-blood thirsty pedophiles (no word on if he’ll defeat the sadists placing pineapples on pizzas).

Additionally, the Qnuts think 9/11 was an inside job, it’s illegal for Muslims to hold elected office, school shootings are faked, leading Democrats should be execucted, and Zionist supremacists are secretly masterminding Muslim immigration to Europe in a scheme to outbreed white people. That last one is called the “Great Replacement Theory” and has been promoted by Tucker Carlson on his show that speaks “truth” to white supremacists.

Qanon also believes 9/11 was an inside job. Now, they’re also claiming the January 6 insurrection by racist Trump goons was also an inside job which is really confusing because one minute, it’s Antifa, then it’s something for Trump supporters to champion, then it’s the FBI, and then they go back to being proud of it and wanting January 6 to be the next federal holiday.

With the Jewish space lasers theory, Congressperson Greene says California wildfires don’t just happen. They’re created by the Rothchilds (who’s been blamed for crap since the 1760s, including the Holocaust, presidential assassinations, pineapple on pizza, the existence of ketchup, dubstep, and ska) in conjunction with the Pacific Gas and Electric Company to make room for a new high-speed rail system.

This new high-speed rail system will allow gays from San Francisco, in a scheme crafted by Nancy Pelosi, Lebron James, Stacey Abrams, and Oprah (all Rothchilds puppets), to infiltrate small-town America and indoctrinate your children into the gay Marxist agenda faster than they could with regular old Amtrak-speed trains.

And if you think the Space Lasers setting forests on fires so the gay trains can get to your kids, so they just mouth the words to the pledge of allegiance instead of actually saying them, because that’s what gay Marxist kids do, is crazy, wait until you hear the one about Italian Satellites. No, wait until you hear who was pushing the conspiracy theory about Italian Satellites.

Did I forget to mention another belief of Qanon and Marjorie Taylor Greene is that Donald Trump won the election? Yeah, just to be clear…he did not. But, they’re clinging to this bullshit and some other really wacky crazy stuff was spread, not just by the Qjerks, but by people working for Donald Trump.

Donald Trump’s legal team consisting of Rudy Giuliani and Sidney Powell pushed conspiracy theories that the deceased Hugo Chavez was behind Dominion Voting Systems, and that they were changing votes on ballots from Trump to Joe Biden (and in case you’re a Republican, who won the election and is now president of the United States). Naturally, there were assorted Jews involved too. You can’t have a good conspiracy theory without Jews.

During the 2018 midterms, Trump even pushed that George Soros was funding migrant caravans. He actually said he didn’t have any proof or evidence, but he was going to push it anyway. Tucker loved this because it was another night he go to promote the Great Replacement Theory.

Speaking of Italians: Have you seen Stanley Tucci’s new show on CNN? He’s going from place to place in Italy, eating Italian food, scarfing down pasta dish after pasta dish, eating rabbits, and even some fried ravioli, and he’s still skinny. This pisses me off because he’s gotta be in his 60s, right? How is he so skinny? At least I still have more hair than him. Sorry, I got off track….but that bald, 60-year-old, skinny-ass pasta-eating mother….grrrrr. Argula!

Italygate, yeah…I know….holds that people connected to the Italian defense firm Leonardo used satellites to change the votes cast in the 2020 election from Trump to Biden. This explains why so many votes came in late in the evening on election night for Joe Biden, putting him over the top to win the presidency. Never mind the detail mail-in ballots are counted last and there were tons of mail-in ballots, which is why Republicans are now making it harder for people to vote by mail and not creating laws restricting Italian satellites.

It’s a crazy theory and I’ve yet to find details on why the Italians would want to meddle in the U.S. election. Oh my God…Was the Pope involved? You know, Pope Francis is a liberal Catholic…Joe Biden is a liberal Catholic…and the Vatican is in Rome which is in…wait for it…Italy. I even fact-checked this. Rome is in Italy.

Also, pizzagate. What if the Italians are also in on pizzagate and they want baby-body parts, bought from Planned Parenthood in a for-profit scheme, to remain a pizza topping? I ran another fact-check and discovered pizza was invented in…wait for it….this will come as a shocker…Toronto. No, wait. That’s not right. Toronto’s where they got the idea to put cheese curds and gravy on French fries. Why, Canada? Why? Pizza was invented in Italy and if done right, not in Chicago, is much better than poutine. Why, Canada? Did you know raw cheese curds are illegal in the United States? Has anyone blamed the Rothchilds or George Soros yet for cheese curds?

On January 1, five days before the Trump insurrection, White House chief of staff Mark Meadows forwarded acting attorney general Jeffrey A. Rosen a ton of cheese curds. No, that’s not right. He forwarded a YouTube video of a former intelligence officer named Brad Johnson detailing what has been dubbed the “Italygate” conspiracy theory. The video was taken down by YouTube because they mistakenly thought it was one of my watch-me-draw videos. No, they took it down because it was a stupid conspiracy theory.

But this conspiracy theory was so nuts, that even Trump goons at the Justice Department laughed it off. Rosen shared the email with acting deputy attorney general Richard Donoghue, who replied, in full, “Pure insanity.”

Mark Meadows sent more than one email on Italygate to the Justice Department. Shortly after those emails, he sent another asking them to task a conspiracy theorist to go to Georgia and examine signatures on ballots…and not investigate why Stanley Tucci can stay so skinny while eating all that Carbonara. Seriously. How does he do it?

Rosen, who was appointed by Trump to replace William Barr, sent this one to Donoghue and wrote, “Can you believe this? I am not going to respond to the message below.” Donoghue replied, “At least it’s better than the last one, but that doesn’t say much.”

What’s really scary is that we had people in government chasing conspiracy theories and wanting to use them to validate enacting martial law and bloody coup attempts while doing nothing about the cheese-curd threat.

The Trump administration and their followers are insane. Capisce?