Posted on May 13, 2022
You are here: Home / Politics / Is Rudy Toast? Caught in Highly Compromising Scene in New Borat Movie 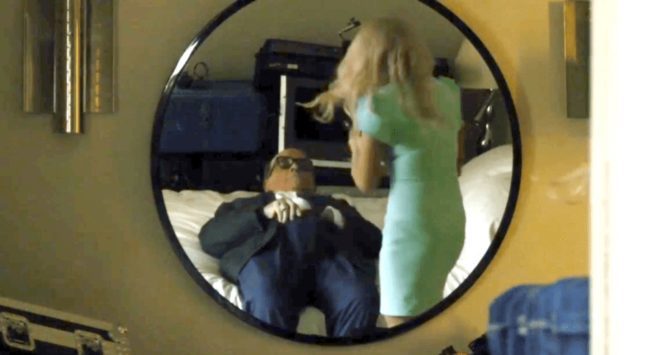 Former New York City Mayor Rudy Giuliani has recently been trying to get the (unproven) message out that former Vice President Joe Biden’s son Hunter’s laptop had pictures of “underage girls” on it. Now it turns out that in Sacha Baron Cohen’s Borat sequel there’s a scene that shows him flirting (or a little more than that) with a young woman in her hotel room. He lay down on her bed and appears to be putting his hand down his pants.

When the history of this era is written, Giuliani will be a prime example of someone who imploded. If more damning details come out, or the scene is creepy when the film is released Friday, he could go from being America’s Mayor to America’s Hack to America’s Perv.

This could change, of course. But today it seems his branding has changed. He has gone from someone associated with 9/11 to someone who might inspire a call to 911.

The Guardian broke the story:

The reputation of Rudy Giuliani could be set for a further blow with the release of highly embarrassing footage in Sacha Baron Cohen’s follow-up to Borat.

In the film, released on Friday, the former New York mayor and current personal attorney to Donald Trump is seen reaching into his trousers and apparently touching his genitals while reclining on a bed in the presence of the actor playing Borat’s daughter, who is posing as a TV journalist.

Following an obsequious interview for a fake conservative news programme, the pair retreat at her suggestion for a drink to the bedroom of a hotel suite, which is rigged with concealed cameras.

After she removes his microphone, Giuliani, 76, can be seen lying back on the bed, fiddling with his untucked shirt and reaching into his trousers. They are then interrupted by Borat who runs in and says: “She’s 15. She’s too old for you.”

Representatives for Giuliani have not replied to the Guardian’s requests for comment.

Though the specifics were unknown until now, news emerged that Baron Cohen had tried to prank Giuliani back in July. Giuliani reportedly called the NYPD after the incident, and told The New York Post at the time that a female interviewer had asked him a few questions about the pandemic, after which, “This guy comes running in, wearing a crazy, what I would say was a pink transgender outfit. It was a pink bikini, with lace, underneath a translucent mesh top, it looked absurd. He had the beard, bare legs, and wasn’t what I would call distractingly attractive.”

Giuliani did not mention anything to the Post about being invited to the interviewer’s suite or being alone with her.

I am hearing from my sources here in Hollywood who seen it.

It is much worse than it is described and here is a still photo from it.

I’ve seen the Giuliani moment in Borat 2. It’s even wilder than it sounds. Beyond cringe.

This scene in the new Borat movie is the worst moment of Rudy Giuliani's life, hands down.

Rudy Giuliani has a lot more influence over the sitting president of the United States than Hunter Biden did over Joe Biden as vice president or today. I've enjoyed all the editorials in conservative publications worrying about our president being so close to this man. ???

Rudy Giuliani must have thought Borat's daughter was his cousin. #RudyGiuliani

Now you can all go bleach your eyes too.

Not hard to imagine why he and Trump are best buddies pic.twitter.com/njtwDKwREa

Does Rudy get a SAG card for this major motion picture role? pic.twitter.com/QS8sG9qDFU

Rudy Giuliani was fooled by a well known TV character. let that sink in.

how it started how it’s going pic.twitter.com/YjOXVJtyYF

Hey Qanon? You had the wrong party. https://t.co/hmKlUOQvph

Rudy G tried to get Biden and failed. Then Borat gets Rudy G. Once again, it’s the comedians and not the news media that exposes wrongdoing and saves America!

NEW: "I thought about all the people [Sascha Baron Cohen] previously fooled and I felt good about myself because he didn’t get me,” Giuliani once said.

After watching the film, it becomes abundantly clear that Baron Cohen most certainly did “get” him.https://t.co/WesHGx82R8

If Borat was able to compromise Rudy, imagine what a trained intelligence officer could do. https://t.co/nit4eIDR3l

How many millions of people are going to see Giuliani doing this with a girl he thinks is 15? pic.twitter.com/gOOfBBLQpr

OPINION – The latest liberal freakout involves the new "Borat" movie and Rudy Giuliani. But is it fair to judge Giuliani? Have not we toyed with our genitals while being interviewed? This is shaming the perfectly healthy behavior of a 76yo man and a 15yo reporter he just met …