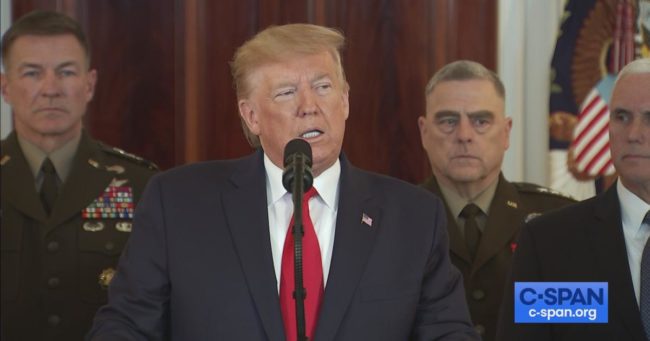 The brazen missile attacks from Iranian territory on US bases in semi-autonomous Kurdish territory and Iraq’s northern Anbar province show a lack of fear that signals the decline of America’s strategic influence despite its huge military superiority.

The Iraqi attack is a measured response to the US killing of Iranian war hero Qasem Soleimani. It can be justified as self defense under United Nations rules since he was a very senior Iranian military official.

The limitation of the strikes to US bases indicates that Tehran’s quarrel is only with President Donald Trump. But it warns the Iraqi and Kurdish governments that the burden falls on them of restraining the US from using their territories to attack the country of Iran.

Iran has also warned that failure by Saudi Arabia, Kuwait, Bahrain, Qatar, the United Arab Emirates and Israel to restrain the US military from attacking Iran from their territories will make them targets of retaliation from the Iranian military.

That would certainly cause a region-wide war from which Trump may not be able to extricate the US because Americans would have to defend everybody. The cost in American lives and treasure is incalculable even if the rich Arab kingdoms try to please Trump by defraying costs.

Iran’s careful riposte to Soleimani’s killing seemed to take Washington by surprise. It could either dial down hostilities or carry out Trump’s very strong threats.

Trump may find himself isolated if he makes good on his threats. The 2003 invasion of Iraq inadvertently gifted the country to Iran’s influence. Now, any destruction of Iran will gift influence in Iraq, Iran and Syria to Russia and Afghanistan to China.

It could also isolate the US because its local allies have already started stepping back for their own safety since Iran has now become an implacable long term military enemy of the US. Trump may find it hard to attack Iran from their territories against their will for any length of time.

Preventing a beleaguered Iran from slipping into Russian arms for military help and China for economic help may be very difficult now. Both countries are already on Iran’s side in the UN Security Council and both have veto power.

Worse, liberating Iran’s people from their retrograde theocratic regime will be impossible without taking the huge risk of turning the country into a chaotic failed state. Most UN member states would not support this.

Washington has repeatedly proven that it is incapable of stabilizing broken Muslim nations, despite the sacrifice of trillions of dollars and thousands of young soldiers’ lives. Iran is not just a Muslim nation. It is a civilization with a cohesive religion for 1,600 years and a Persian identity for over 3,000 years.

Chaos in Iran because of military defeat will surely destabilize Saudi Arabia, Bahrain, Qatar, the United Arab Emirates, Afghanistan and Lebanon. Each has significant Shia Muslim populations, who will be outraged by the destruction of the beacon of their faith.

American military and civilian leaders would be overwhelmingly mired on too many fronts in the region from Lebanon to Pakistan. Above all, they will not be able to stabilize any country without local friends, almost all of whom Trump has already lost.

Russia and China will not put more than a toe in countries other than Iran because of the mess. But they will do everything possible to augment the wastage of American money and military lives to weaken the US.

Contrary to the usual assertions of critics concerning foreign policy blunders in the Middle East, Trump is not wrong in his insistence that the bigoted regime in Tehran is harmful for world peace. The citizens of Syria, Iraq, Iran and Libya do deserve freedom from oppression by their own governments.

But insisting on helping Iran’s unfortunate people using Trump’s methods may be too costly, for now.

There were no objective causes for America’s strategic decline from its long-held position as the world’s most influential nation in economic, military and moral terms. Nor were there powerful enough challenges from rival powers, including Europeans, Russia and China.

Not until President Donald Trump’s arrived on the scene. Unfortunately for the American people including his dedicated supporters, he has exaggerated self-belief, supplemented by amoral use of punitive force, whether economic or military, to obtain changed behavior from foreign governments.

He is a nationalist who fails to notice that other peoples also love their nations. When push comes to shove, they, too, place dignity above fear of America’s might.