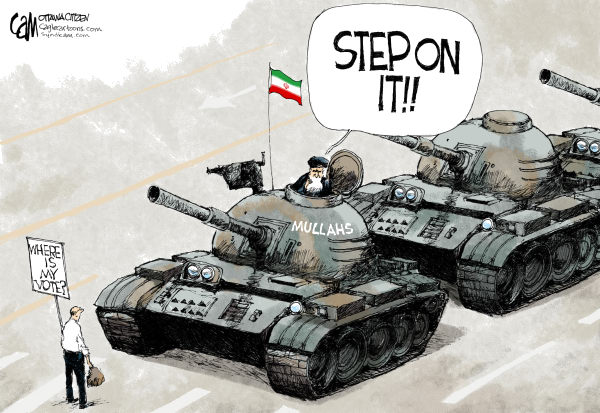 Iranian filmmaker Mohsen Makhmalbaf writes in The Guardian that he has been asked to deliver a message from Hossein Mousavi: Mousavi has been silenced and his closest associates arrested…and the picture Makhmalbaf gives about what’s going inside Iran is one of a county whose bottom line is that it is controlled by one man and anyone who seriously resists will be suppressed:

I have been given the ­responsibility of telling the world what is happening in Iran. The office of Mir Hossein Mousavi, who the Iranian people truly want as their leader, has asked me to do so. They have asked me to tell how Mousavi’s headquarters was wrecked by plainclothes police officers. To tell how the commanders of the revolutionary guard ordered him to stay silent. To urge people to take to the streets because Mousavi could not do so directly.

The people in the streets don’t want a recount of last week’s vote. They want it annulled. This is a crucial moment in our history. Since the 1979 revolution Iran has had 80% dictatorship and 20% democracy. We have dictatorship because one person is in charge, the supreme leader – first Khomeini, now Khamenei. He controls the army and the clergy, the justice system and the media, as well as our oil money.

There are some examples of democracy – reformers elected to parliament, and the very fact that a person like Mousavi could stand for election. But, since the day of the election, this ­element of democracy has vanished. Ayatollah Ali Khamenei announced that Mahmoud Ahmadinejad had won, and that whoever opposed this will be suppressed – a position he affirmed speaking today in Tehran. People wanted to have demonstrations within the law, but the authorities would not let them. This is the first time we have seen millions on the streets without the permission of the supreme leader.

Makhmalbaf says what’s happening now is part of the culture of martrydom, people are gathering now to mourn those killed at demonstrations…and this cycle will continue if more demonstrators are killed (which by all accounts experts believe will indeed be the case given Khamenei’s comments Friday). He goes on:

So why do the Iranian people not want Ahmadinejad as their leader? Because he is nothing but a loudspeaker for Khamenei. Under Ahmadinejad, economic problems have grown worse, despite $280bn of oil revenue. Social and literary freedom is much more restricted than under his predecessor, Mohammad Khatami. The world views us as a terrorist nation on the lookout for war. When Khatami was president of Iran, Bush was president of the US. Now the Americans have Obama and we have our version of Bush. We need an Obama who can find solutions for Iran’s problems. Although power would remain in the hands of Khamenei, a president like Mousavi could weaken the supreme leader.

Some suggest the protests will fade because nobody is leading them. All those close to Mousavi have been arrested, and his contact with the outside world has been restricted. People rely on word of mouth, because their mobile phones and the internet have been closed down. That they continue to gather shows they want something more than an election. They want freedom, and if they are not granted it we will be faced with another revolution.

Regimes throughout history have found that they can indeed keep a lid on freedom and democracy if they are willing to simply shrug and butcher enough people in the streets who resist official demands to disperse, arrest as many of the people perceived (authentic or not) as ringleaders, and to say “to hell with the rest of the world” if there are international protests.

Makhmalbaf notes that Iranians were united in the revolution thirty years ago, and unity can be power. He says Iranians lost that unity and now have regained it and argues that the armed forces can only repress one city not an entire national uprising. He then addresses criticism that Mousavi is part of the system and things won’t change under him, by pointing to Mousavi’s evolution.

In order to neuralise his power, the position of prime minister was eliminated from the constitution and he was pushed out of politics. So Mousavi returned to the world of artists because in a country where there are no real political parties, artists can act as a party. The artists supported Khatami and now they support Mousavi.

But history will tell you that the change Gandhi helped shape in India didn’t happen in a day. Or a week. Or a month. Or a year.

Some long days are ahead for Iran.

The cartoon by Cam Cardow, The Ottawa Citizen, is copyrighted and licensed to run on TMV. All Rights Reserved. Unauthorized reproduction prohibited.