IMUS IN THE MOURNING (Cartoon and Column) 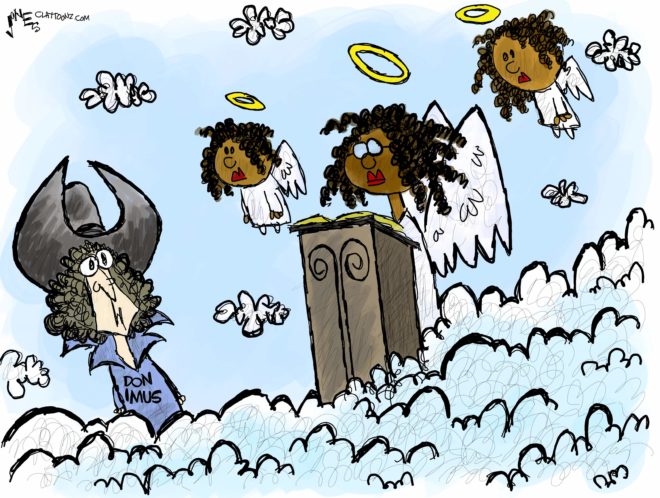 Radio shock jock Don Imus died yesterday at the age of 79. While he pioneered the “shock jock” genre that was eventually taken over by Howard Stern, Imus was at times, a little too shocking.

A shock jock says things that can’t be said on the radio until they say it. It’s why people listen. But Imus said things that nobody should say on the radio or anywhere…unless they’re a Republican supporting Donald Trump. Don Imus had a history of racism and he displayed it multiple times on the air and in private.

The racist controversy Imus is best known for is his “nappy-headed hos” comment toward the Rutgers women’s basketball team in 2007 when they made the finals for the national championship.

That conversation started with Imus referring to them as “rough girls” because of their tattoos. His executive producer, Bernard McGuirk, called them “hardcore hos” which lead to Imus’ infamous “nappy-headed hos” comment. I guess they were trying to one-up each other’s racism. McGuirk may have “won” when he said the upcoming game between Rutgers and Tennessee looked like a match between the “jigaboos and the wannabes.”

This is why I never listened to shock-jock radio. At what point was any of that humorous?

Imus was initially suspended for the comments before being fired. McGuirk, who also has a history with racism and once called President Barack Obama a “jug-eared neophyte,” was also fired (but he’s currently hosting a morning drive-time show in New York City).

In the same year as his attack on the Rutger’s team, Imus made a racist comment following the suspension of NFL cornerback Adam Pacman Jones. After asking, “What color is he?” and being told he is black, Imus said, “Well there you go. Now we know.” Imus later said his comment was misinterpreted and that he was actually defending Jones.

Imus feuded with Howard Stern, despite having the same employer. In 1984, he said Stern was a “Jew bastard who should be castrated and put in an oven.”

Imus said a black reporter for The New York Times was a “quota hire.”

A New York Times columnist reported that during the course of an interview with Mike Wallace for 60 Minutes, he told a producer off-camera that McGuirk was hired to do “nigger jokes.”

Stern’s co-host Robin Quivers claimed Imus caller her “nigger” to her face when they both worked at WABC, and she supported Stern’s claim that he once said the same thing to a black secretary at the station.

Imus also referred to Arabs as “ragheads” and homosexuals as “faggots” on multiple occasions.

I’ve stated before I’m not a fan of obituary cartoons and especially drawing St. Peter and the Pearly Gates. I think it’s lazy writing. But for Don Imus, today I’m making an exception.