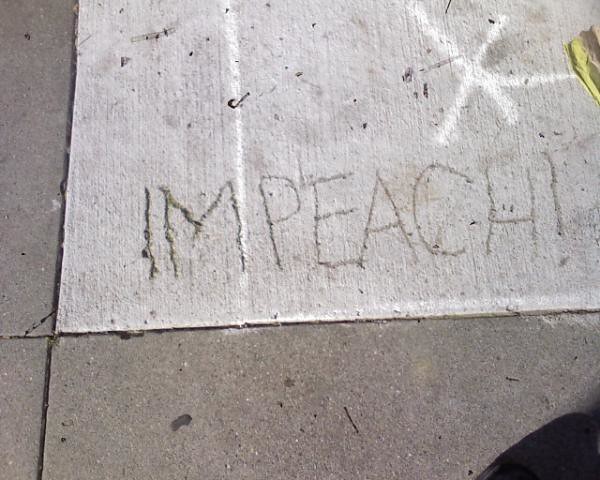 In a damning, nearly 1,600-word editorial, simply yet powerfully titled “Impeach,” the New York Times Editorial Board lays out the case for the impeachment of Donald J. Trump for abusing the power of his office “by strong-arming Ukraine, a vulnerable ally, holding up hundreds of millions of dollars in military aid until it agreed to help him influence the 2020 election by digging up dirt on a political rival.”

Furthermore, “When caught in the act, [Trump] rejected the very idea that a president could be required by Congress to explain and justify his actions, showing ‘unprecedented, categorical and indiscriminate defiance’ in the face of multiple subpoenas.” Thus, making it impossible for Congress to “carry out fully its constitutionally mandated oversight role,” and, thereby violating “the separation of powers, a safeguard of the American republic.”

The New York Times is not alone in calling for Trump’s impeachment. Other major national newspapers such as USA Today, The Philadelphia Enquirer, The Boston Globe, The Washington Post, The Tampa Bay Times (“with reluctance”) and the Los Angeles Times have done likewise.

…it’s worth noting that editorial boards, by design, tend to be cautious when lending their institutional support to something so disruptive. In the world of mainstream journalism, editorials from multiple legacy newspapers calling for the ultimate constitutional check on a president is, believe me, “bigly tremendous.”

While many newspapers in swing states “have yet to embrace impeachment,”
conservative news and opinion sources are fiercely opposing impeachment, many of them “inspired” by the accused himself and cheer-led by Fox News.

And how about Republican legislators?

So far, Republican legislators have shown little sign of treating this constitutional process with the seriousness it demands.
Instead, they have been working overtime to abet the president’s wrongdoing. They have spread toxic misinformation and conspiracy theories to try to justify his actions and raged about the unfairness of the inquiry, complaining that Democrats have been trying to impeach Mr. Trump since he took office.

Yes, the Board notes, Democrats have been “eager” to pursue impeachment “before it became unavoidable” and provides a (partial) laundry list of offenses Trump has committed since he became President:

• Acceptance of foreign money at his many businesses
• Violations of campaign-finance law in paying hush money to Stormy Daniels.
• Obstructions of justice in the Russia investigation, as extensively documented by Robert Mueller

But it all changed in September, the Board says, when the outline of Trump’s Ukraine scheme was revealed. “That made it impossible to ignore the president’s lawlessness because it sounded an alarm that he was seeking to subvert the next election, depriving the voters of their right to check his behavior.”

The Times quotes from the Articles of Impeachment:

President Trump, by such conduct, has demonstrated that he will remain a threat to national security and the Constitution if allowed to remain in office, and has acted in a manner grossly incompatible with self-governance and the rule of law.

Have Democrats handled everything in the impeachment process perfectly?

The Times finds it “regrettable” that “the House moved as fast as it did “without working further through the courts and through other means to hear from numerous crucial witnesses.”

However, the Times continues, “Democratic leaders have a point when they say they can’t afford to wait, given the looming electoral deadline and Mr. Trump’s pattern of soliciting foreign assistance for his campaigns,” even after the Ukraine disgrace was revealed. The Times cites examples of Trump audaciously and publicly asking China to investigate the Biden’s, and of Trump, as recently as October, declaring “Well, I would think that, if they were honest about it, they’d start a major investigation into the Bidens. It’s a very simple answer.”

As to Republicans’ defense that Trump cannot be impeached for “high crimes and misdemeanors” because he has not committed an actual crime:

Putting aside a strong case that Mr. Trump has, in fact, broken at least one law, this isn’t how impeachment works. “High crimes” refers to severe violations of the public trust by a high-ranking official, not literal crimes. A president can commit a technical crime that doesn’t violate the public trust (say, jaywalking), and he can commit an impeachable offense that is found nowhere in the federal criminal code (like abuse of power).

In answer to Republicans’ “sole remaining arguments” of “So what? It wasn’t that big a deal,” or to Mick Mulvaney’s insolent “Get over it,” the Times says, “This stance at least has the virtue of acknowledging the president’s vice, but that doesn’t make it O.K.”

If the House impeaches Trump, what are the chances the Senate will convict?

No very good, I say, and the Times Editorial Board agrees:

• Mitch McConnell told Sean Hannity on Fox, there will be “no difference between the president’s position and our position in how to handle this…” adding that there was “no chance” the Senate would vote to convict.

• Lindsey Graham said during the impeachment hearings, “I’ve written the whole process off…I think this is a bunch of B.S.”

[More recently, Graham admitted that he has clearly made up his mind. “I’m not trying to hide the fact that I have disdain for the accusations in the process. So I don’t need any witnesses. … I am ready to vote on the underlying articles. I don’t really need to hear a lot of witnesses…” he said.]

In other words, Senators who will be both impartial judge and jury in the impeachment trial have already decided to take the side of the accused.

The Times Editorial Board concludes, “For now, that leaves the defense of the Constitution, and the Republic, to the House of Representatives.”