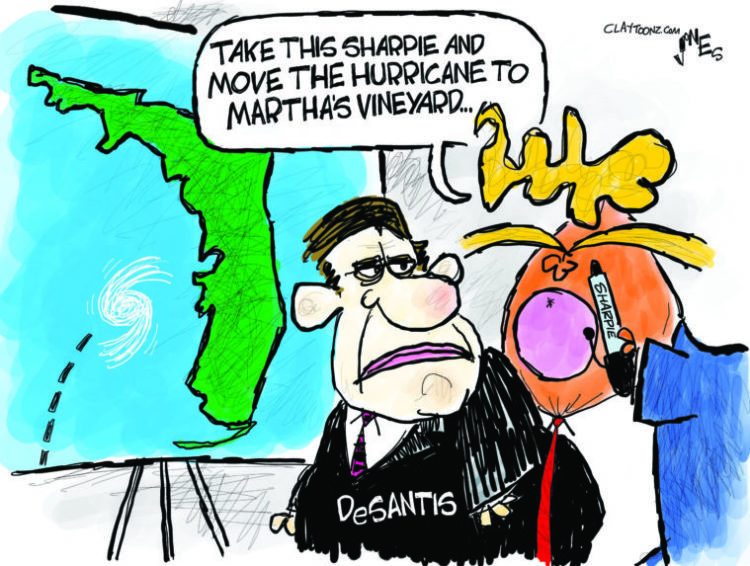 Hurricane Dorian was an extremely powerful category 5 storm that hit the Atlantic ocean in 2019. It decimated much of the Bahamas before traveling up the east coast hitting Florida, Georgia, North Carolina (where it made landfall), and Virginia. It even hit Newfoundland and Nova Scotia with hurricane-force winds before finally petering out over Greenland. Note that none of those places are Alabama.

When storms develop in the Atlantic Ocean, forecasts for where the storm is a threat range from Mexico to Canada. By the time the current president (sic) at that time sent out a tweet on the storm, the Gulf of Mexico was not in the projections and every forecast had it going up the east coast. But, when you have a racist gameshow host clown president, misinformation will be sent out. And when that clown is contradicted, the clown will order every government agency to lie for him so his feelings aren’t hurt.

Proving that he didn’t pay attention to his daily briefings on threats to the nation, Trump tweeted that Alabama was in danger. It was not. But, Alabama is a yee-haw state that would rather listen to Trump than to scientists. So, nuts started calling local weather bureaus. In response to this, the Birmingham office of the National Weather Service tweeted that Alabama “will NOT see any impacts from Dorian.”

NWS director Louis Uccellini said that the Birmingham NWS had not been responding to Trump’s tweet, but rather to a flood of phone calls and social media contacts their office had received, asking if the hurricane was going to hit Alabama. He added that the Birmingham office “did what any office would do to protect the public”, counteracting the wrong information to “stop public panic” and “ensure public safety.”

Donald Trump didn’t like this. He didn’t like being contradicted. He could have just said “oops,” even though it wasn’t a simple mistake. It caused panic in Alabama as it ranks 5th in states with the most mobile homes per capita. But Trump can’t handle being wrong, so he doubled down.

Donald Trump displayed a map in the Oval Office of Hurricane Dorian’s trajectory and it looked like someone had edited the path…with a Sharpie. We all know who loves to make obscenely huge signatures with Sharpies, but the Trump administration clung to the bullshit.

White House Chief of Staff Mick Mulvaney ordered Commerce Secretary Wilbur Ross to order the National Oceanic and Atmospheric Administration (NOAA) to back up Trump’s stupid claim and disavow the tweet from the Birmingham NWS office. There are reports that Ross threatened to fire people if this wasn’t done. Later reports from the press said Trump himself told his staff they needed to get the contradiction fixed.

NOAA published an unsigned statement supporting Trump’s claim and said the Birmingham tweet was wrong. It also contradicted itself as NOAA issued a September 1 statement that the “current forecast path of Dorian does not include Alabama.” September 1 was also the day when Trump originally claimed Alamba was in the forecast path.

What this did was undermine trust in our nation’s weather service.

The president of the NWS Employees Organization commented that the statement was “political”, “utterly disgusting and disingenuous”, and with “no scientific basis.”

The Commerce Department’s Inspector General Peggy E. Gustafson wrote a message to NOAA staffers saying the NWS “must maintain standards of scientific integrity,” adding that the statement called into question “the NWS’s processes, scientific independence, and ability to communicate accurate and timely weather warnings and data to the nation in times of national emergency.”

Craig N. McLean, NOAA’s acting chief scientist, said “the content of this press release is very concerning as it compromises the ability of NOAA to convey life-saving information necessary to avoid substantial and specific danger to public health and safety.” He also said he was “pursuing the potential violations of our NOAA Administrative Order on Scientific Integrity.”

Journalist Timothy O’Brien said, “NOAA, an agency built on science and data engineered to provide reliable, impartial information and serve the public interest, wound up purging science and data from its public profile to cover for Trump. This is how good government decays when it’s compromised by a cult of personality.”

Robert Reich said, “I think we have to face the truth that no one seems to want to admit. This is no longer a case of excessive narcissism or grandiosity. We’re not simply dealing with an unusually large ego. The president of the United States is seriously, frighteningly, dangerously unstable. And he’s getting worse by the day.”

The phrase, “Don’t piss on my leg and tell me it’s raining” is popular in the south, yet many Alabamans believed Trump when he said it was raining while he was pissing on their legs. Donald Trump literally lied about the weather and had the government support the lie.

Facts are eschewed in favor of cults of personality.

Now in Florida, facts are pushed to the side as Republican Governor Ron DeSantis purges elected officials who disagree with him, bans books and curriculums on American history, wages war against Disney, and deports migrants to Martha’s Vineyard from Texas who he claims are somehow threatening Floridians.

Now, as Hurricane Ian threatens Florida, Ron DeSantis is the face of public safety long after his credibility has been shot from his constant lies. Ron DeSantis politicizes everything he touches for personal gain. Who says he won’t do that with a hurricane? Trump did.

If you believe there is such a thing called “covfefe,” or that there is a nation pronounced as “Thighland,” or we have a national park called “Yo-Semite,” or that Trump won, or that Ron DeSantis isn’t a disgusting condescending lying racist fascist, then you’re a sycophant.

Ron DeSantis dropping migrants off on Martha’s Vineyard may be illegal – an immigration lawyer explains why
Activity: 4 Total

One way to prevent the next coup | Editorial
Activity: 2 Total

Trump: On and On and On
Activity: 1 Total