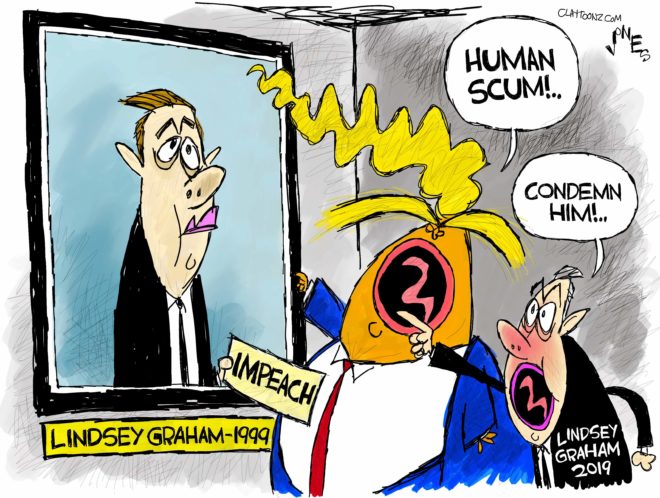 Lindsey Graham has been representing South Carolina in Congress since 1995, and he doesn’t want to stop. If advocating a principle, even one he used to stand by, threatens his political existence, then principles be damned.

In 2015, while running for president and describing what Trump was “selling,” Graham said, “Here’s what you’re buying: He’s a race-baiting, xenophobic religious bigot. He doesn’t represent my party. He doesn’t represent the values that the men and women who wear the uniform are fighting for.”

Now, with the impeachment inquiry into Donald Trump gaining traction (because Trump is guilty), Graham is losing his s–t defending Trump. Unable to defend against the charges, accusations, and statements by witnesses, Graham has been running to the media, crying about the process, and yesterday, he introduced a resolution condemning the impeachment inquiry. Remember, this is an inquiry. The public hearings haven’t started yet.

Less than two weeks ago after Trump betrayed our Kurdish allies in Syria, Lindsey must have found his testicles at the bottom of a mint julep because he came out (not that kind of coming out) strongly against Trump’s move. Graham called the move “irresponsible,” a “stain on America’s honor,” and the “biggest blunder of his presidency.” Graham vowed to be Trump’s “worst nightmare” and introduced legislation sanctioning Turkey for invading Syria. And then…

Then Donald Trump said, “I am the boss” and told Graham to focus on other things, like going after his accusers. Donald Trump Jr. started a social media campaign going after Lindsey, encouraging him to go after the impeachment process, and Daddy Trump summoned him to the White House.

Lickspittle Lindsey emerged from the White House saying he’s “impressed” Trump is “thinking outside the box” on Syria, removed his legislation sanctioning Turkey, marched into the Senate TV studio, and announced legislation condemning the impeachment process. Graham went from being Trump’s “worst nightmare” to his wet dream.

Graham went after the impeachment saying, “The attempted impeachment of President Trump is out of bounds,” and described it as a “Star-chamber-type inquiry, a runaround, off-script, wrong, a rogue action, very dangerous.” Then he screamed, “If we were doing this, you’d be beating the shit out of us!” Well, he must be shitless because he did do it.

Back in 1999, Lindsey was a HUGE advocate for impeaching President Bill Clinton. The Starr investigation went after Clinton on a bad land deal. Unable to find him guilty of a crime, Kenneth Starr continued his investigation until he finally found one. Clinton has been accused of everything from aggressive flirting to rape, and all they could get on the guy was a lie before a grand jury over a consensual sex act. That was enough for Lindsey to impeach. To Lindsey, lying about consensual sex is worse than holding military aid from a foreign nation in a war against Russia in exchange for political favors.

Back in 1999, Graham said, “A president’s failure to comply with subpoenas was impeachable because it “took the power from Congress.” Now, as Trump defies subpoenas,” Graham doesn’t want Congress to share power with the presidency and be one of the three branches of government. Graham only wants one branch and that limb is Trump.

Graham has been complaining about the impeachment hearings being held in private. When it was pointed out that depositions were held in private during Watergate and Whitewater, Graham said, “The inquiry itself became very public.” And so will these. But, Graham and his cohorts can’t attack the substance. They can’t defend Trump.

After House Republicans stormed a secure room where the impeachment hearings were being held on Wednesday, Graham said they were “nuts” and “that’s not the way to do it.” He must have gotten another phone call because he later tweeted, “CORRECTION … I understand their frustration and they have good reason to be upset.”

Graham even defended Trump’s use of “lynching” to describe the impeachment process and then co-opted the word for his own use.

Donald Trump called Republicans, like Mitt Romney, who aren’t loyal to him or blindly obedient, “human scum.” I think that term is more fitting for those who bail on defending their nation, abandoning law and order, wanting to take power away from Congress to serve an authoritarian president and in the process, abandoning every principle they once stood for.

1999 Lindsey Graham was on the wrong side, but he was right about subpoenas and the power of Congress. 2019 Lindsey Graham is just wrong, a hypocrite, no principles, ethics, or shame. He’s human scum.