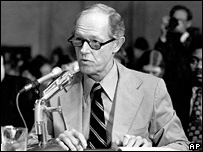 Via Ed Morrissey, the BBC reports:

Howard Hunt, the CIA officer who helped to plan the Watergate break-in that led to the downfall of US President Richard Nixon has died, aged 88. Mr Hunt, who was jailed over the incident, had died after a lengthy bout of pneumonia in Miami, his son said.
The accidental discovery of the Watergate burglary snowballed into the country’s biggest political scandal. The conspirators wanted to plant bugs to spy on the Democrats during the Republicans’ re-election campaign.

While working for the CIA, Mr Hunt recruited four of the five actual burglars, and always stressed he preferred to be known as the “Watergate conspirator”.

He said he was bitter that he had to go to prison while Mr Nixon had been allowed to resign.

Obviously Hunt was involved in one of the biggest controversies in the 20th century, perhaps even in the entire history of America (regarding politics that is).

Watergate wasn’t the extent of Hunt’s resumÃ©. He also helped organize the Bay of Pigs invasion of Cuba, which ended disastrously when John Kennedy pulled air support from the mission and led to decades of bitter relations between Fidel Castro and the US. He also worked on the CIA mission to overthrow Jacobo Arbenz as Guatemala’s president in 1954, one of a series of coups generalled by Langley in the crucible of the Cold War…

Hunt expressed bitterness over the disparity in treatment, but as a man who engineered the deliberate downfall of other national leaders, he had to understand that they usually set up fall guys — and it was Hunt’s turn.

As happens more often, I am in complete agreement with Ed when he writes:

Don’t expect to see fond public reminiscences of Howard Hunt in the aftermath of his death. Most people would like to forget him altogether and bury the scandal of Watergate along with him. Others will attempt to minimize his crimes and excuse them as Washington politics. We should recall Hunt and his crimes, though, and the remarkable and despicable use of a CIA operative by an administration to spy on its political opponents. In our democracy, that’s an abuse that should never be forgotten.

That being said, the ‘trauma’ and memory of Watergate will get less over time, especially when everyone involved has passed away.