Posted on October 20, 2020
You are here: Home / Politics / How Sarah Palin’s Right-Wing Admirers Are Falling All Over Themselves Trying to Love Her Up 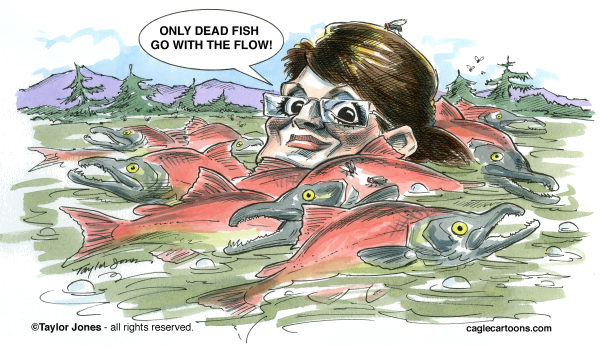 Whether we like it or not, we’re being bombarded with all things Sarah Palin, more so now pre-resignation than at any time since last year’s campaign. And, honestly, it was driving me nuts over the weekend.

But the right loves her, and continues not just to apologize for her, not just to cheerlead for her, but to pump her up out of all justifiable proportion. Which is fine, when you think about it, because the simple fact is, she’s not — and is not close to being — a credible national political figure. And that’s putting it nicely. I’d say she’s a joke, an appalling caricature of phony, mock-outraged populism, a caricature of herself, actually, though I’m not sure the caricature is any different than the real thing, so entwined is she with her own manufactured persona.

Let’s take a look at what a few conservatives have said about her in recent days:

1) Ross Douthat — One of the more thoughtful conservatives around, to be sure, with a perch at the NYT, one of the key media organizations of the coastal elite that Palin claims to loathe, and against which she directs much of her silly resentment. I was going to comment earlier on his ridiculous juxtaposition of “Palin and Her Enemies,” but I don’t have much to add to Mustang Bobby’s terrific post from yesterday afternoon.

While Douthat is certainly right that Palin has “tarnished” her own “ideal,” and that she remains popular, “beloved by millions,” it is ridiculous to suggest, as Douthat does, that Palin represents “the democratic ideal” — in contrast to Obama, who supposedly represents “the meritocratic ideal” — simply because she has shown “that anyone can grow up to be a great success story without graduating from Columbia and Harvard.” I had no idea that going to an Ivy makes you somehow un-democratic, but this is the sort of populism that Palin spins, the sort that her story, and her political celebrity, has inspired on the right, including among elitist coastal newspaper columnists who are hardly Heartland material.

As Mustang Bobby puts it, Palin’s problems were her own fault, not the media’s, not the political commentariat’s, not liberals’ or Democrats’. Douthat claims that the attacks on Palin “had everything to do with Palin’s gender and her social class.” No, they had everything to do with Palin herself. And they weren’t attacks, they were justifiable criticisms of a self-absorbed dimwit who was in way over her head but who nonetheless managed to arouse the GOP mob.

2) Fred Barnes — Kristol’s pal at TWS and an unabashed partisan (and Palin booster). For Barnes, who can’t seem to keep it in his pants, Palin is “the most exciting Republican figure to emerge in decades.” But, alas. While she has “a super-abundance of charisma,” she also has “shortcomings in experience and knowledge” — which is just another way of saying she has a nice personality, but…

And so Barnes, after tracing the history of Republican presidential nominees since WWII, looks ahead, a long, long way ahead: “By itself, two months on the Republican ticket won’t propel her to the presidential nomination. But there is a way: win Alaska’s lone House seat in 2012 and oust Democratic senator Mark Begich in 2014. A term in the House and another in the Senate — nothing would do more to groom her for the White House than this and transform her into the best Republican candidate for the presidency in, say, 2020, when she’d be 56.”

Actually, it’s not so unreasonable, given that Palin has a much brighter future in Alaska than nationally, and she may just be able to do what Barnes suggests. But her bright future has dimmed even in Alaska, and I wonder if her career path to 2020 is as clear as this. Obviously, we shall see. What I do think is that we haven’t heard the last of Palin the politician.

But back to Barnes. Despite the fact that Palin has glaring “shortcomings” and “limitations,” he still things she was a brilliant veep pick for McCain. He even claims she won the debate with Biden, which is insane. He apparently was watching a different debate than the rest of us, perhaps one firing off in the recesses of his imagination. And he claims that “she could have taken Joe Biden apart while demonstrating her own knowledge and brainpower had she known more about national issues,” which is also insane. The fact is, she didn’t have any knowledge or brainpower to demonstrate, and she didn’t know anything about national issues beyond the facile talking points that had been fed to her. Her “personality and likeability” in that debate just came across as smarmy arrogance. And yet Barnes still wanted her to be, as they say, a heartbeat away from the presidency? How irresponsible is that?

3) Jim Prevor — Also at TWS, Prevor puts even Barnes to shame with respect to Palin-boosting, as there is apparently no end to what Palin can accomplish if she just puts her mind to it:

Will she write a thoughtful book? Become a syndicated columnist whose ideas make her a “must read” for everyone? Will she found an important new think tank? An important journal? Spearhead an effort to help the unemployed? Decide to launch a business? Or maybe she will start a new political party?

Maybe Sarah Palin thinks she can change the world without becoming president. Maybe she is deeply and authentically conservative and isn’t certain that aiming to change the world is such a good idea.

Maybe plumes of white smoke will herald her election from atop the Vatican.

Maybe she’ll win back-to-back Nobels, if not for literature, maybe for peace and chemistry, or for whatever areas she wishes to tackle upon her return to private life.

Who knows? Who can say?

As TNR’s Chris Orr notes, it’s rather curious that Prevor put quotation marks around “must read.” Are we to take it that Prevor is being ironic, that there’s no way Palin would ever be a legitimate “must read”? No, surely not, but I think Chris is quite right that the passage reads better if you put quotation marks around “thoughtful,” “ideas,” “important” (twice), “effort,” and “business” as well. I’m quoting more than Chris here, so I’d also put them around “change the world” and “deeply and authentically conservative.”

Seriously, though, does anyone other than her mindless admirers at TWS actually think that Palin might found a think tank or journal, or “help the unemployed”?

I’ve had enough of Sarah Palin, yes, but thankfully her fan club keeps me entertained with its stupidity. At a time like this, we can at least be thankful for that.

(Cross-posted from The Reaction.)

The cartoon by Taylor Jones, Politicalcartoons.com, is copyrighted and licensed to run on TMV. All Rights Reserved. Unauthorized reproduction prohibited.