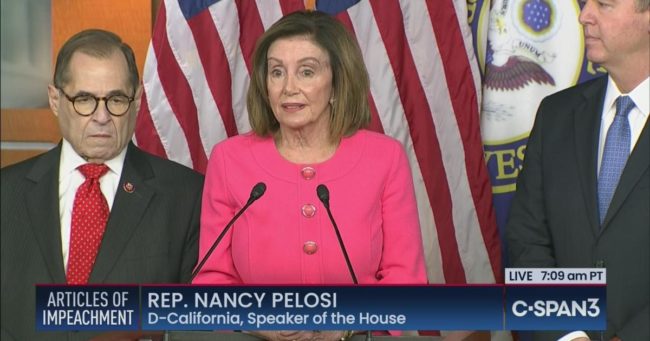 Did you think it began earlier? Donald Trump has been impeached and now the questions is whether he’s the first President in American history to be removed from office. It is (1) unlikely given the historical record (2) as likely as a cabbage sprouting wings and flying to mars with the currrent GOpers in the Senate, who embody the success of Trump’s hostile take over of the Republican Party, turning it into a part at odds with many of its past values,policies and norms. The House has sent impeachment articles to the Senate.

The House of Representatives voted Wednesday to send the Senate two articles of impeachment against President Trump, appointing seven Democrats to prosecute the case and initiating only the third presidential impeachment trial in American history.

The 228-to-193 vote came almost a month after the House impeached Mr. Trump on charges of abuse of power and obstruction of Congress, formally accusing him of seeking foreign election assistance from Ukraine and then trying to conceal his actions from a House inquiry. Like that earlier vote, Wednesday’s fell largely along party lines.

Only one Democrat, Representative Collin C. Peterson of Minnesota, joined every Republican in voting “no.”

It set the stage for what promises to be a partisan impeachment trial, which has already opened bitter divisions in the normally staid Senate, and has the potential to shape Mr. Trump’s legacy, stoke the country’s political polarization and inject fresh uncertainty into the 2020 elections.

I’m willing to make a prediction now. No matter what the evidence the GOPers in the Senate will not convict him. If evidence presented is compelling and not countered sufficiently by the White House’s impeachment team, then the question is how many Republicans won’t go along with the party line. Will he not be convicted by as huge party line vote or will some Republican Senators vote with the Democrats, making it harder for Trump to declare that it was all a partisan exercise pushed by Democrats.
The Democrats also announced their team of impeachment managers:

House Speaker Nancy Pelosi tapped two trusted committee chairmen to lead the team that will make the case in the Senate for President Trump’s removal from office, supported by a relatively small cast of additional impeachment “managers.”

Confirming widespread speculation that swirled for weeks as she held back the articles of impeachment, Pelosi (D-Calif.) turned to House Intelligence Committee Chairman Adam B. Schiff (D-Calif.) and Judiciary Committee Chairman Jerrold Nadler (D-N.Y.) to lead the House team. She made the announcement at a Wednesday news conference after keeping the cast of managers under tight wraps for weeks.

The seven-member team is smaller than the 13-member squad that presented articles of impeachment against President Bill Clinton to the Senate in 1999, reflecting a more tightly controlled approach to the investigation. In a sign of the highly choreographed process, Garcia said she learned only Tuesday that she would be named a manager.

This foolish take shows why Trump has not been able to improve his standing in an impeachment backlash. The defenses are all process-related. Nobody has put up a substantive defense of Trump’s behavior re: Ukraine. He’ll likely survive the conviction vote – but hurt politically. https://t.co/2gXx25TyPp

I don’t know how a Senator could pick up the newspaper this morning, read the new revelations, and not conclude that the Senate needs access to relevant documents and witnesses in the impeachment trial of President Trump. pic.twitter.com/uDB9A9ojaA

New Lev Parnas documents show a chilling picture of surveillance of the US Ambassador to Ukraine, adding to the many reasons why we need a full and fair impeachment trial in the Senate. Without witnesses and documents, the trial will be the equivalent of a cover up. #TruthExposed pic.twitter.com/Huf2BewlE8