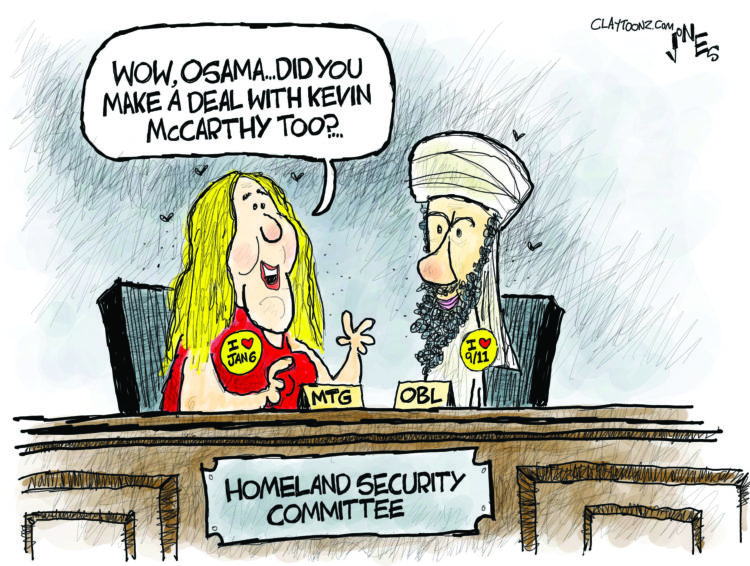 Let’s make one thing clear. What happened on January 6, 2021, was a terrorist attack against our country.

It was an insurrection by white nationalists to overturn a free democratic election and install an unelected dictator. It was a coup attempt.

It was an attack designed to stop the certification of the election, a duty mandated on Congress by the United States Constitution.

The people who did this are terrorists. Ashli Babbitt, who was killed during the attack, was a terrorist.

This was an attack on the United States of America. It was not a protest. It wasn’t just a bunch of tourists. It was a terrorist attack that was instigated by conspiracy theories and the lie that Donald Trump won the 2020 election and it was stolen from him by Joe Biden, Democrats, and a Deep State. One of the biggest advocates for this lie and assault on our nation is Marjorie Taylor Green, a representative from Georgia.

Why would the Speaker of the House put someone on a committee designed to protect our nation from terrorist attacks who’s expressed support for terrorist attacks? Marjorie Taylor Greene said, very recently, that if she had planned the attack on January 6, 2021, then “we would have won” “We?” “We,” as “we the terrorist?” “We,” as in “we who attacked our country?” “We,” as in “we, who attempted to destroy our democratic system and replace it with a fascist state?” “We,” as in “We, the white nationalist racist goons?” That “we?” I bet MTG thinks that if she planned 9/11, then more hijacked planes would have flown into buildings killing more Americans.

Even without examining MTG’s treason, she’s too stupid to be on the Homeland Security Committee or any other committee. This is the same idiot who believes wildfires in California were started by Jewish Space Lasers. But Kevin McCarthy isn’t looking to put talented or capable people on committees who are effective at legislation. Liar George Santos was placed on two committees, one of which is the small Businesses which I guess he’s qualified for from working with Ponzi schemes and running a GoFundMe scam to steal money from a dying dog.

Jim “Gym” Jordan is actually the chairman of the Judiciary Committee and he displays on a daily basis how dishonest he is. If you don’t know why the FBI hasn’t raided Joe Biden’s home yet, you’re either lying or you’re an idiot. Plus, Jordan doesn’t create legislation that gets passed. Last year, a study by the Center for Effective Lawmaking (a joint effort by the University of Virginia and Vanderbilt University) ranked Jim “Gym” Jordan as the 202nd most effective Republican in the House of Representatives…out of 205. As a person elected to represent a congressional district, he sucks.

To be fair, he sucks just as a person. He’s a horrible and vile human being. A lot of the human excrement left on the floors of Congress on January 6 by the MAGA terrorists was mistaken for Jim “Gym” Jordan. He doesn’t do anything in Congress except gaslight and bark. In the last congressional session, he sponsored zero legislation that passed the House. This makes him ineffective. All Jordan does in Congress is deflect for Donald Trump and conduct bullsh*t investigations to hurt Democrats politically.

And just like Marjorie Taylor Greene, Jim “Gym” Jordan played a part in the January 6 coup attempt. This goon who ignored subpoenas from a congressional investigation will now lead an investigation. This is like putting Jeffrey Epstein, Harvey Weinstein, and Donald Trump in charge of sexual assault investigations.

In the last session, MTG was stripped of all her committee assignments for racist and antisemitic rhetoric, for spreading conspiracy theories on the 2020 election, 9/11, and the 2018 Parkland shooting, and for supporting violence against Democrats. MTG expressed support for executing Nancy Pelosi, Barack Obama, and Hillary Clinton. During her first congressional campaign, she posted an image on Facebook of herself holding a gun next to images of Representatives Alexandria Ocasio-Cortez, Ilhan Omar, and Rashida Tlaib with the caption, “We need strong conservative Christians to go on the offense against these socialists who want to rip our country apart.”

In 2019, she encouraged her fans to “flood the Capitol” and resort to violence.

When it comes to protecting the homeland, she has fear-mongered that Muslims are coming to “conquer America.” She’s posted on Facebook, “We don’t need gun control! We need Muslim control!

MTG has jumped on the conspiracy theory bandwagon that George Soros, a millionaire who donates to Democrats, is a Nazi and said he’s “a piece of crap that turned in his own people over to the Nazis.” Soros is actually a Holocaust survivor.

You can’t faux that you care about President Biden misplacing classified documents and the security of this nation when you put a terrorist-loving lying racist antisemitic Islamophobic conspiracy theorist on the Homeland Security Committee.