Posted on November 30, 2021
You are here: Home / Politics / Hillary Clinton And Robert Gibbs Blast Back At Cheney’s Anti-Obama Comments 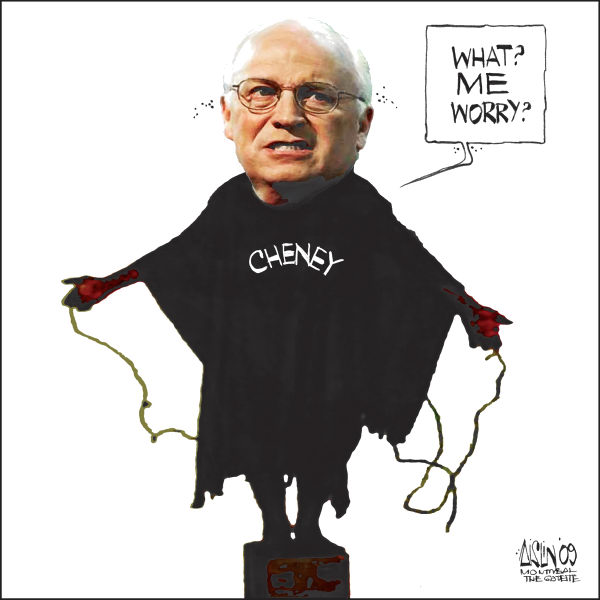 When former Vice President Dick Cheney used the show of his favorite interviewer (Fox News’ Shaun Hannity) to blast President Barack Obama for releasing torture memos and say Obama was looking “weak,” it was big news and the question became: would the new administration try not to give Cheney more publicity and let it just fade away, or would it answer back but not with both verbal barrels blazing?

And now we have the answer: over the past two days Secretary of State Hillary Clinton and Obama spokesman Robert Gibbs not only replied to Cheney, but framed their comments in a way that reminded the bulk of Americans — as opposed to the actual people questioning them — why voters voted to end the 8-year Republicans’ eight year executive branch control. The United States had had an “Imperial Presidency” in its history, but never an Imperial Presidency coupled with an Imperial Vice Presidency — or, perhaps more accurately, a Vice President seemingly seeing the Vice Presidency as an autonomous branch of government.

But by the time the verbal shots had cleared one thing became evident: in the end, Cheney, like many GOPers, had wound up preaching to the choir in a kind of retro argument (“We were right!”) while Clinton and Gibbs were addressing the bulk of Americans who wanted to try a different approach for a change. Or, rather, do a bit of retro and perhaps return to decades of values that administrations of both parties adhered to on the issue of torture.

First, there was Clinton testifying to Congress and bluntly questioning Cheney’s very credibility when it comes to leveling criticism on the issue of torture. This was the Hillary of old — the feared Hillary who was going to draw a line in the sand. And it seemed as if she was ready for her “3 a.m.” political call.

It came as Congressman Dana Rohrbacher, R-Calif. became in essence a relentless surrogate for Cheney himself:

Congressman Dana Rohrbacher, R-Calif., took up Dick Cheney’s cause today and pressed Secretary of State Clinton to urge the Obama administration to declassify and release documents he believes demonstrate the success of the enhanced interrogation techniques employed during the Bush administration.

Rep. Rohrbacher referred to Mr. Cheney’s recent comments where he claimed the memos released by the Obama administration last week tend to only show the work of CIA interrogators and Justice Department officials in a negative light. The congressman went on to say that Mr. Cheney believes specific documents that are still classified will show that information gleaned from those interrogations aided the national security interests of the United States.

“Are you in favor of releasing the documents that Dick Cheney has been requesting be released?,” asked Rep. Rohrbacher.

“Well, it won’t surprise you, I don’t consider him a particularly reliable source of information,” responded Secretary Clinton to a smattering of laughter in the hearing room.

So the gloves were off: if Cheney was going to strip away the niceties that most former Veeps show a different administration and talk in jargon more typical of the GOP’s talk radio political culture, then Clinton would say what polls suggest many Americans believe: Dick Cheney is damaged goods in the credibility department. But it wasn’t over yet:

Congressman Rohrbacher appeared none too pleased and went at it again. “Madam Secretary, I asked you a specific question,” he said sternly.

“Congressman, I believe we ought to get to the bottom of this entire matter. I think it is in the best interest of our country and that is what the president believes and that is why he has taken the actions he did,” said Clinton.

Watch the video and see Rohrbacher seemingly feel he proved his point. But his problem and the GOP’s problem remains constant: they are arguing to true believers in language and a tone that turns off other voters. They’re not making dent with other voters because the GOP’s and Bush administration’s credibility is low. How to change it? Be FOWARD LOOKING — but the whole GOP push now is to argue it’s was better the way Bush & Co did it. Watch video:
http://www.youtube.com/watch?v=XX_CcQthDMI

And then there was Robert Gibbs commenting on Cheney — once again taking his gloves off:

Q Okay, last point is Vice President Cheney saying he’s disturbed by all of this.

MR. GIBBS: Well, you know, I — we’ve had a at least two-year policy disagreement with the Vice President of the United States of America. That policy disagreement is whether or not you can uphold the values in which this country was founded at the same time that you protect the citizens that live in that country. The President of the United States and this administration believes that you can. The Vice President has come to, in our opinion, a different conclusion.

But, again, this was a — this has been a policy disagreement for at least the better part of two years, maybe longer than that, I’d have to go back and look. But, you know, the President — the Vice President was also happy to talk about the way we’re conducting our foreign policy, which has also been a several-year disagreement with the Vice President. The President of the United States, President Obama has on his first two foreign trips changed the image of America around the world through leadership and engagement that advances our national interests, makes us safer and more secure, and stronger.

I think that’s the main disagreement that we have with the Vice President.

Q So as we come to the end of his first hundred days is the President’s hope of bipartisanship dead now or — I mean, you’ve got various Republicans saying —

Q No, various Republicans also beyond the former Vice President saying the President has been weak, the photos with Chavez. Do you have any hope of moving forward and having bipartisanship in the second first hundred — the second hundred days?

Q Can the rest of us leave? (Laughter.)

The President, as I’ve said and as the President will continue to do, will reach out to those that want to work with him on the priorities in making our country not just safer, but stronger economically.

In terms of — again, the Vice President had a particular way of conducting the foreign policy of this country. The election I think spoke to a change in the way that foreign policy is done, as I said yesterday, in order to make us more secure. Again, I’ll back this up and give the answer to some of you that I did yesterday.

Will this back and forth continue?

Even though it is a spectacle without parallel in American history the answer is YES.

Cheney clearly is trying to define his legacy. He believes his approach was necessary. He could also be trying to short-circuit some possible future legal issues. He has an instant media audience whenever he wants to give an interview, whether to a mainstream reporter or a talk show host (can Glenn Beck be in his future?). And he’s throwing read meat to the GOP’s conservative base which adores him and seems to consider Obama as a usurper who has taken “their” Presidency away.

The national GOP’s problem is that while Cheney remains an issue he drowns out the emerging profiles and messages of younger politicos who aren’t carrying around Cheney’s baggage.

In political terms, Cheney’s baggage is now so significant TSA will want to inspect him next time he gets before a microphone.

And for the Democrats and White House? What could be more desirable than to have Dick Cheney out in front as the “face” of the GOP (unless it’s having Rush Limbaugh, Sean Hannity or Glenn Beck)? It’s a face polls have found most Americans would like to see less of.

Each time Obama, Clinton or Gibbs answers Cheney they’re reminding the very voters that elected Obama and whov’e been holding firm in Obama’s polling numbers — the Democrats, big chunk of independent voters and non talk show political culture Republicans — of the Bush administration economic melt down, the continuing (if more successful now) war in Iraq, bin Laden not being captured by Bush, the increasingly shocking revelations about Bush era torture policy (the latest being the suggestion that some torture might have been to somehow get someone to make a link between Iraq and bin Laden to justify administration policy).

It’s backward looking, versus forward looking. In U.S. politics, there are cycles — and today, most voters seem forward looking as they seek a fresh start and different stewards of the U.S. foreign policy and economy.

The above cartoon by Aislin, The Montreal Gazette, is copyrighted and licensed to appear on TMV. All Rights Reserved. Unauthorized reproduction prohibited.