Posted on July 28, 2022
You are here: Home / Featured / ‘He Should Be Expelled’: Republican Paul Gosar Shares Edited Video of Him Killing AOC 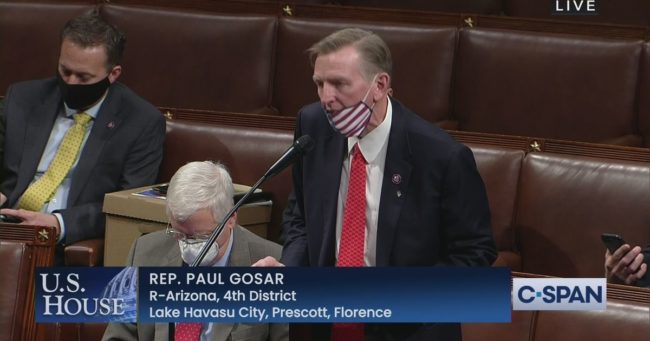 “This man should not serve in Congress,” said Rep. Ilhan Omar (D-Minn.). “Fantasizing about violently attacking your colleagues has no place in our political discourse and society.”

“This puts lives in danger. Enough with the violent bigotry.”

“This man should not serve in Congress,” Rep. Ilhan Omar (D-Minn.) wrote in response to the video, which Gosar shared on Twitter on Sunday with the caption, “Any anime fans out there?”

“Fantasizing about violently attacking your colleagues has no place in our political discourse and society,” Omar added.

Rep. Cori Bush (D-Mo.), another ally of Ocasio-Cortez, called Gosar a “white supremacist clown” and demanded his expulsion from the House over the video, which also features footage of migrants crossing the Rio Grande—a scene overlaid with splattered blood.

Twitter has appended a notice to Gosar’s post flagging it as a violation of the platform’s rules barring “hateful conduct.”

“Every day these white supremacists push the limits further and further to see how far they can go without consequences,” Bush wrote. “This puts lives in danger. Enough with the violent bigotry.”

Max Berger of More Perfect Union pointed out late Monday that Gosar is “one of the members of Congress who collaborated with the insurrectionists in the lead up to the ‘Stop the Steal’ rally.”

“He’s still promoting violence against Democratic members of Congress,” Berger added. “He should be expelled from Congress immediately.”

Any anime fans out there? pic.twitter.com/TxX4qiJhOi

Ocasio-Cortez (D-N.Y.) herself responded to Gosar’s tweet by noting his ties to white supremacists and slamming Republican House Minority Leader Kevin McCarthy (R-Calif.) for doing nothing to hold his members accountable and explaining away their disgraceful actions.

“While I was en route to Glasgow, a creepy member I work with who fundraises for Neo-Nazi groups shared a fantasy video of him killing me,” Ocasio-Cortez tweeted. “And he’ll face no consequences because McCarthy cheers him on with excuses.”

“This dude is just a collection of wet toothpicks anyway,” she added of Gosar, who was elected to the House in 2010. “White supremacy is for extremely fragile people and sad men like him, whose self-concept relies on the myth that he was born superior because deep down he knows he couldn’t open a pickle jar or read a whole book by himself.”

So while I was en route to Glasgow, a creepy member I work with who fundraises for Neo-Nazi groups shared a fantasy video of him killing me

And he’ll face no consequences bc @GOPLeader cheers him on with excuses.

As the Washington Post reported Monday, “Gosar has long drawn criticism for his extremist views, including his spreading of conspiracy theories about the Jan. 6 attack on the U.S. Capitol by a pro-Trump mob and the deadly white-nationalist rally in Charlottesville in 2017.”

“In February,” the Post added, “he appeared at an event whose organizer called for white supremacy. Gosar later distanced himself from the organizer’s remarks.”

The Congressional Progressive Caucus (CPC), of which Ocasio-Cortez is a member, slammed Gosar’s tweet as “abhorrent behavior” and noted that it “comes in a long line of Republican members harassing and threatening violence against members of our Caucus, most often women of color.”

“Everyone deserves a workplace free from abuse—including in Congress,” the CPC added. “McCarthy must respond with action.”