QAnon and other Conspiracy Theories

US to begin reuniting migrant families separated under Trump

Republicans grapple with way out of political limbo 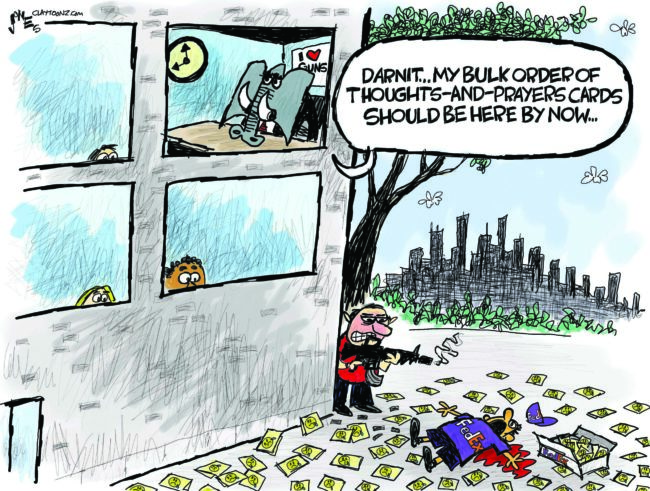 Another day in America, another mass shooting.

After a recent mass shooting when Democrats in the Senate said we need legislation to stop this insanity, and not JUST thoughts and prayers, Senator Ted Cruz, the most disingenuous sonofabitch who has ever hatched from an egg, was livid. How dare Democrats play “theatrics” by attacking thoughts and prayers and instead, suggesting solutions. Even saying we need more than thoughts and prayers is an assault on our Christian values.

If you had listened to Ted Cruz, you would have thought Democrats had left a flaming bag of turds on the steps of the Thoughts and Prayers Institute for Gun Violence and Other Things To Be Sad About.

Ted talked about the power of prayer several mass shootings ago. Thursday night, another mass shooting took eight lives. This one was in Indianapolis at a FedEx facility. This was at least the 45th mass shooting since March 16, 2021.

In case you’re a Republican, let me lay that out for you. It was the 45th mass shooting in the span of a month. CNN defines a mass shooting as when four or more people, excluding the gunman, are wounded or killed. If you are going to order cards for thoughts and prayers, you better place a bulk order.

After the mass shooting in Georgia, or maybe it was Colorado (it’s getting harder to keep track), two right-wing nutty fundamentalist cartoonists did cartoons of a crying Uncle Sam on the exact same day. They didn’t address the problem except to say it was sad. One of those morons lives in Indianapolis. Since he had just drawn a crying Uncle Sam, he had to come up with something different for an empty useless gesture. For this one, he had someone hugging a FedEx delivery driver.

The most revolting thing to me about this is that cartoonist works for himself. Nobody demanded he draw something that was a totally useless cliché. No editor held him back and forced him to take a coward’s way out. His response to something in his community was just as empty as his response to when it happens somewhere else. He didn’t even both trying to make it unique or particular to his home. He let his community down just as he’s been letting his country down. And nobody made him do it. He chose to suck all on his own. Just like Ted Cruz.

I don’t expect my cartoon above, or any of the others I’ve drawn on the subject, to end gun violence. But I am adding my voice to many others to find a solution other than just praying for it. I don’t keep repeating the same empty gesture again and again. For right-wing cartoonists, they express it’s sad people die from weapons they believe everyone should be able to own. Tomorrow, they’ll draw some phony outrage about a Hunter Biden sex tape or some crap that doesn’t affect anyone except their white privilege. Maybe they’ll draw a cartoon telling black people cops will stop shooting them if they just follow basic instructions. But when faced with a real challenge, they will fail. Like me, they’re just cartoonists.

Ted Cruz is a politician. Ted was elected to stop crap like this. He’s paid to confront gun violence. He’s one of 50 members of the United States Senate that doesn’t want to do anything about gun violence. Seriously. They don’t want to do anything. They are owned and controlled by the National Rifle Association. And when pressed to do something, they react as if you attacked their lord and savior. It’s a great deflection when you’re full of crap.

Ted Cruz giving thoughts and prayers when a mass shooting happens is him fleeing the situation just like when he fled to Cancun when his state was hit with a freeze. Ted Cruz says drafting legislation to combat gun violence is “theater.” This guy calling it “theater” is the same guy who once made a campaign commercial of him cooking bacon by wrapping it around the barrel of an AR-15, then heating the barrel by shooting the gun a thousand times…then he ate that flaccid bacon as if that was owning the libs. That doesn’t own the libs. What it does is make libs lose their appetites after seeing Ted Cruz put stuff in his mouth. It works like reverse porn. Also, it’s stuff like this that makes people think he’s the Zodiac Killer.

I believe in thoughts and prayers. I’m agnostic, but I think praying for someone is positive. It can be like meditation. Also, thinking is good. Give problems some thought. But, that’s what you do while you’re also tackling the problem.

When I have a problem with my Surface Pro, like the stylus decides to stop working while I’m on a CNN deadline, I tackle the problem. I’m googling up solutions and trying them out. All during that time, I’m praying it’s going to work. Granted, my prayers are probably different from yours and go something like, “You better work, you no good useless piece of crap sonofabitch mother forkerforkerforkforkforker….etc.” But, praying, or cursing at the problem, isn’t the only thing I’m doing.

Have you ever told someone you’re “still thinking about it” when you’re actually not? Like being asked if you’re coming home for Thanksgiving where all your troglodyte Trump-supporting cousins will be there talking about the stolen election and Jewish space lasers, and you say, “I’m still thinking about it”? But you’re not thinking about it. There’s no way you’re going to that festival of morons. You’ve already made up your mind that instead of going home to eat turkey and casserole with lunatics, you’re going to get a WaWa gobbler sandwich and a six-pack of Red Stripe, then sit home and watch Dallas lose to whoever they’re playing this year. That’s what I’m gonna do.

That’s thoughts and prayers for politicians.

Is it too much to ask politicians, even the most creepy disingenuous ones like Ted Cruz, to multitask and pray while also actually doing something? I mean, doing something other than accepting a campaign contribution?

When you pray for something to get better, are you literally asking God to fix it? Are you putting it entirely on God to do what you were elected to do? And as I’ve mentioned before, when you offer thoughts and prayers, you don’t even have to do it. Nobody knows if you’re actually giving something a thought or a prayer. It’s really the most useless thing you can do for a problem. Next time you get a flat tire, just pray for it. Don’t change the tire yourself or get your hands dirty. Let God fix it. Let me know how that works out.

FedEx used to have a slogan that said, “When it absolutely, positively has to be there overnight.” FedEx doesn’t pray packages get to their destinations. They actually ph

ysically deliver them. Washington Republican mofos need to do more than pray to end gun violence. Obviously, their thoughts and prayers are NOT working. Nobody is paying me the kind of money Ted Cruz is being given by taxpayers, but I know that if you don’t do anything about a problem, it’s just going to get worse.