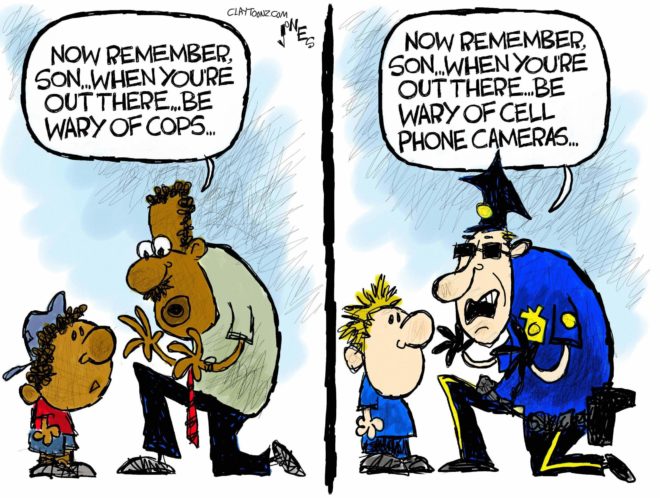 Former Minneapolis police officer Derek Chauvin was found guilty yesterday on all three counts he was charged with. He will be going to jail for a very long time as he may receive a sentence of 40 years. As my colleagues Mike Luckovich and Steve Sack both drew yesterday, the jury gave a verdict that “black lives matter.”

Black lives do matter, but in this country, for too long they haven’t. In fact, the verdict, being the correct verdict, came as a surprise to everyone. It surprised black America and white people on the left as they celebrated. It surprised racists like Tucker Carlson, Greg Gutfeld, and racist cartoonists who as usual, rushed to defend racists. America doesn’t normally punish cops for killing black people. As I mentioned yesterday, less than two percent of cops are prosecuted for crimes like the one Chauvin committed.

The first people to tell you things are changing for the better are white people. Tucker Carlson even asks, “What is white supremacy?” as if his show isn’t a nightly airing of his personal Mein Kampf. Other white conservatives will acknowledge the importance of the civil rights era, but believe all the work was successful and the mission was accomplished and there is no need to do anything else or even talk about race relations. A lot of white people believe racism was eradicated in this nation. Even liberal whites, myself included, can be shocked at how racist this nation truly is.

I hate to once again refer to the Saturday Night Live skit with Dave Chappelle and Chris Rock after Trump was placed into office, where they’re attending an election night party with white friends who are shocked while the two black guys saw it coming. On election night 2016, I was one of those white people saying, “I think America might be racist.”

Fox News will tell you racism is over in America while there is no better evidence of American racism than watching Fox News.

From all conservatives outraged over the Chauvin verdict, I have yet to hear one give a good reason why the verdict was wrong. I mean, other than the crappy defense that George Floyd’s death of natural causes happened coincidentally while a cop’s knee was on his neck for nine and a half minutes. It seems the racists’ argument the verdict was wrong is based on the belief that cops should be allowed to murder unarmed black men and women.

Those people are proving America is NOT less racist now that a mostly-white jury is sending a cop to prison for murdering a black man. You can’t claim the nation isn’t racist when the number-one cable news show is Tucker Carlson, a guy who endorses the racist Great Replacement Theory and who former Grand Wizard David Duke says speaks for racist America.

Also, this was in Minnesota. When we see a mostly-white jury send a cop to prison for killing a black man in Alabama, come to talk to me.

If 17-year-old Darnella Frazier had not filmed the entire 9 1/2 minutes of Derek Chauvin murdering George Floyd, there never would have been a trial. Shortly after the incident, the Minneapolis Police Department issued a statement saying a suspect had died from medical complications while being arrested.

That was not one murderous racist cop issuing that statement. That was the entire police department. Cop after cop testified that what Chauvin did went against police regulation, but these were the same fuckers who initially tried to cover up the murder.

During the protests after the murder, a black journalist for CNN, Omar Jimenez, his producer, and cameraman were arrested by the Minneapolis State Police. Later, the department issued a statement saying the journalist did not identify himself….despite it being broadcast on live television that the journalist was identifying himself. Also, there were producers and a camera crew…which they were aware of because they arrested them too. One of the cops physically carried the camera while it was still broadcasting live on CNN. That was not a bad cop who issued that lying statement. That was representative of the entire department. Additionally, they never gave a good reason why he was arrested in the first place.

When two Buffalo police officers shoved a 75-year-old man to the ground, surrounded by other cops, none of the cops helped the man who was on the ground bleeding from his head. Later, and only because it was caught on camera, the two cops were charged. Eventually, the charges were dropped.

Also in Buffalo, city police officer Cariol Horne was fired in 2008 for…wait for this…stopping another cop while applying a chokehold on a black man who was handcuffed. They didn’t just fire her. They took away her pension. The incident happened in 2006. But, the black man lived. She was fired and lost her pension but she saved a life. Last week – remember, we’re in 2021, a judge ruled in her favor and restored her pension and backpay. And then, the Buffalo Police Department apologized and said it was wrong to apply a chokehold to a suspect in handcuffs. Actually, I made up that last sentence. They didn’t apologize or admit they were wrong.

Think about this: Cariol Horne just got her pension back in 2021, but when she got in trouble with her department for preventing a cop from murdering a black man in handcuffs, George W. Bush was president. That was a long time ago.

So what has changed after yesterday’s ruling? Probably nothing but hope. It tells us we need to keep fighting because sometimes, we can win. Someday, we will win a case in Alabama. Someday, we’ll win over America.

But for now, cops are still cops. America is still racist America. Black parents still need to have “the talk” with their black children. A black man in the military still better find a well-lit place to pull over for cops to pepper spray him in the face.

And if it wasn’t for Darnella Frazier, Derek Chauvin and his knee would still be policing the streets of Minneapolis. The three cops who stood by and refused to stop Chauvin from murdering George Floyd would also still be on the streets. Thank you, Darnella Frazier. No 17-year-old should ever have to witness a murder, but she came through and probably prevented future murders. Darnella Frazier probably saved lives…just like Cariol Horne did.

But for now, America is still racist. Keep your cell phones on ya’.