Posted on September 5, 2022
You are here: Home / Arts & Entertainment / Cartoons / GRAB ‘EM BY THE CUOMO (Cartoon and Column) 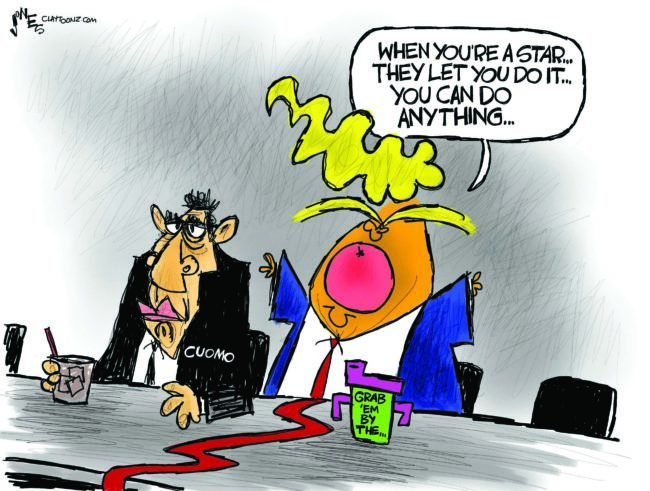 Goddammit, Andrew Cuomo. Stop making me draw cartoons about you.

When I drew a cartoon on the scandal of Cuomo covering up the number of nursing home deaths from covid, liberals came at me. I got a lot of “but what about Trump?” and “you’re drinking the Kool-Aid.” The second time I covered it, after Saturday Night Live went after him, I didn’t get one complaint from liberals. I’m still getting a bunch of “whatabouts” for my Biden/MBS cartoon and the one I drew yesterday on detaining migrant children.

No, I have not become a conservative. Two things have happened. A Democrat won the presidency and Andrew Cuomo keeps fucking up.

And this cartoon is not a “whatabout.” I’m not saying, “Leave Cuomo alone because Trump is worse.” We know Trump is worse. When it comes not punishing Saudi Arabia for murdering a journalist, or detaining migrant children, or sexual assault, Donald Trump is much worse than any Democrat. But I’ll repeat what I wrote a few days ago: We deserve better than Trump.

The “whatabout” argument doesn’t work. It doesn’t defend the person you’re trying to cover up for and if anything, it’s your admittance that your guy is guilty. If anything, being associated with Donald Trump is the worst insult. It’s the worst crime. Do you know who walks up to women who are not their wives and says, “How about a kiss?” Donald Trump, Joe Namath, and according to the latest accusation, Andrew Cuomo. And for the victims of all three, “Ew.”

A third woman has now accused New York Governor Andrew Cuomo of unwanted sexual advances. The first two, who are state employees, accused Cuomo of sexual harassment. The third, Anna Ruch, says Cuomo came up to her at a wedding, placed his hand on her back while she was wearing an open-back dress; she removed his hands, then he put his hands on her cheeks, and asked to kiss her. A friend of Ruch claimed it was loud enough for her to hear and has corroborated the story. It gets worse. There’s a photo from the wedding of Cuomo with his hands on Ms. Ruch’s cheeks. In the photo, she doesn’t look excited. In the photo, from where her arm is located, it looks like she’s about to do Mr. Miyagi’s wax off move.

Cuomo released a statement saying his words and actions have been “misinterpreted as an unwanted flirtation” and said, “To the extent anyone felt that way, I am truly sorry about that.” That’s an apology where he’s sorry that it’s your fault. If that’s the defense he’s going to pull out, sorry, implement, then why doesn’t he just use the Trump defense and say they’re ugly and he’d never sexually harass, assault, or try to kiss a woman who doesn’t rate higher than a six?

Charlotte Bennett, a former aide to the governor said the apology was inadequate and, “These are not the actions of someone who simply feels misunderstood. They are the actions of an individual who wields his power to avoid justice.”

After calls were made for an investigation, Cuomo selected former federal Judge Barbara Jones to investigate claims of sexual harassment, but it was pointed out that he shouldn’t have a hand in the probe. Obviously, he likes to put his hands where they don’t belong. Cuomo shouldn’t be selecting who investigates him.

Then, Beth Garvey, special counsel and senior adviser to Cuomo, asked New York Attorney General Letitia James and Chief Judge Janet DiFiore to choose “an independent and qualified lawyer in private practice without political affiliation” to conduct a “thorough review” and issue a report on the matter in an effort to “avoid even the perception of a lack of independence or inference of politics.”

But the state AG knocked that one down too and said, “To clarify, I do not accept the governor’s proposal. The state’s Executive Law clearly gives my office the authority to investigate this matter once the governor provides a referral.”

“While I have deep respect for Chief Judge DiFiore, I am the duly elected attorney general and it is my responsibility to carry out this task, per Executive Law. The governor must provide this referral so an independent investigation with subpoena power can be conducted.”

That means the judge can’t be a part of the decision on who is going to investigate Cuomo, and his office can’t select who is going to make that decision. That resides only with the AG, who is now doing just that. James already has her hands full investigating Cuomo’s coverup of nursing home deaths and assorted Trump fuckery in the state. She’ll be handing the sexual harassment stuff to an independent investigator.

The Me Too movement is not a partisan thing. It’s not to be used politically to go after enemies. Wrong is wrong. It’s just as bad when a Democrat does it. When an old creeper is trying to force his tongue down your throat, or “grab you by the hoo-ha,” their political affiliation is less important than getting them to stop it.

Maybe a good rule of thumb for Democrats would be: What would Donald Trump do? Think about what that would be, then don’t do it.