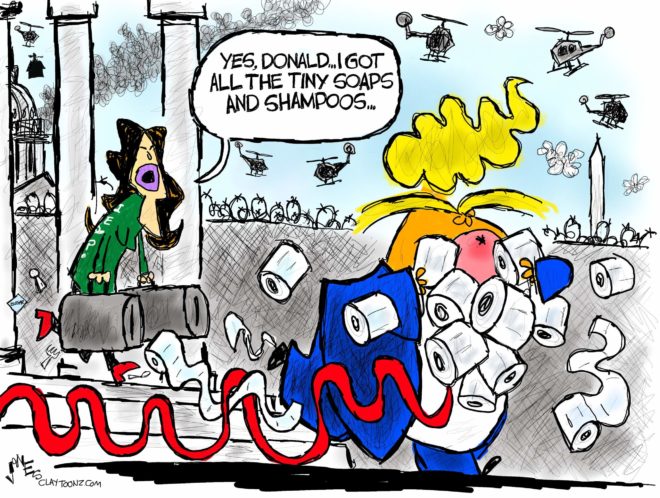 If you believe the Trumps will leave the White House without stealing some shit, then I got a bridge to sell you.

Here’s a spoiler, not a prediction: In the coming weeks, we’re going to see news articles about shit the Trumps took out of the White House they weren’t supposed to take. Wait for it. It’s happening. But, I’m no miracle savant with a magic glowing orb (similar to the one Trump was fondling with leaders in Saudi Arabia on his very first official presidential trip) that can see into the future. It’s easy to predict what Trump will do because he always does the wrong thing.

In the past, he’s refused to pay contractors for work done on his resorts and casinos. He’s fought them in court then after settling for much less than he originally agreed with the contractors, he’d stiff the lawyers who fought the case for him. Even now in his last remaining days, he’s refusing to pay Rudy Giuliani’s legal fees and not just because he was charging by the farts. And that’s his friend. Do you know how you can tell a lawyer sucks? It’s when he takes on Donald Trump as a client.

As Donald Trump continues to claim he won the election, he’s packing to leave the White House. The staff is packing and they’re already taking shit out. The White House press office is totally empty and right now, Kayleigh McEnany is fabicating her resume. And some funny stuff has been spotted leaving the White House.

Often when a president and his family leaves the White House, they take some stuff with them they shouldn’t. When the Clinton left, they took a bunch of stuff they weren’t supposed to. They ended up paying the government for some of it and returned others. Was this them being corrupt or being confused? It’s hard to say. On one hand, the rules can be confusing. On the other hand, they’re the Clintons.

Presidents can keep gifts they receive from American citizens. They do have to report the value of it just like private citizens do. But, if the gift was given to the White House, not the president, then the gift belongs to the federal government. That’s where presidents are often confused. Did you give me or the White House that Persian rug?

In 1880, Queen Victoria gave President Rutherford B. Hayes (and yet another who was a better president than Trump) a really cool gift. It was a desk carved out of timber from the British ship H.M.S Resolute. Today, that desk is in the White House and has been used by nearly every president since. Why didn’t Hayes take it when he left the White House? Because gifts from foreign leaders go to the National Archives.

And presidents get some cool stuff, like jewelry, furniture, swords, puppies, pandas, and crocodile insurance. What? Richard Nixon got pandas from China which went to the National Zoo in Washington. President Obama got crocodile insurance from Australia. Donald Trump never received crocodile insurance probably because nobody gives a rat’s ass if he gets eaten by crocodiles…though I’ve been told crocodiles do have better taste.

So the rules on gifts can be confusing. Was it a gift to you or the White House, was it foreign or domestic, is it alive and can it eat you? But one thing is clear, if it was in the White House before you got there, you can’t take it.

This week, chief-of-staff Mark Meadows’ wife was seen taking out a stuffed pheasant. Maybe that was a gift directly to Mark Meadows from an American taxpayer or maybe he brought it with him when he took the job because no office is complete without a stuffed dead bird. The Meadows claim it was brought with him when he took the job and I think that’s believable as it sounds like something disgusting and tacky that a MAGAt would think spiffs up the place. If you see a Trump walking out with a painting of dogs playing poker, yeah that’s probably theirs. I half expect to see Don Jr. walking out with a leg lamp from the Italian city of Fragile.

Also seen being carted off was a bust of Abraham Lincoln, who Donald Trump taught us was a Republican. This bust belongs to the federal government and when not in the White House, is stored with the White House Collection of which the White House chief usher and the curator have responsibility for managing and accounting for in every presidency. The incoming president and his spouse choose which items they want in the White House from the official collection. My question is: Why would the Lincoln bust every leave?

The Andrew Jackson painting? Sure. Send that back to the Collection. But the Lincoln bust? Can’t you assume the next president would want that to remain? And if not, I guess he’d say something after he assumes office and you can remove it then. But that won’t happen because everyone would want the Lincoln bust. Duh!

But, just who is the White House chief usher, the main dude responsible for keeping track of this stuff. He is Timothy Harleth and the curator of the White House Historical Association reports to him. The curator is a career professional who has been on the job for 30 years. Harleth, the usher, is a former employee of the Trump Hotel. Fuck.

There’s going to be a LOT of missing things.

During a trip to Paris, Donald Trump was supposed to visit the Aisne-Marne American Cemetery for fallen Marines, but changed his mind when he thought it was pronounced “Asinine.” So instead of visiting war dead, who he considers suckers and losers, he went to the ambassador’s residence and stole some sh–.

At the residence, he found a portrait and bust he liked of Benjamin Franklin, so he took those back to the White. He also took some Greek figurines (naked women) which was a step-up from the usual figurines he collects from Happy Meals. As it turns out, the items were not authentic and were replicas. That’s normal for Donald Trump as he has a history of purchasing copies then claiming they’re the real deal, despite the fact the authentic paintings are in museums.

The stuff from Paris was exchanged for the real deals which were in the federal archiaves, but how much do you want to bet it all accidentally lands at Mar-a-Lago? How about the Lincoln bust? How about everything in the White House?

Donald Trump is a grifter. Grifters gotta grift. If the curator was really smart, she would have anticipated this back in 2016 after the election, and had everything in the White House replaced with replicas. And the cool thing is, Donald Trump wouldn’t be able to tell the difference. He probably thinks the Las Vegas Eiffel Tower is the real one.

As for all the furniture, let’s hope the Bidens get a new mattress and additionally, fumigate the entire place. Matter of fact, the usual sanitizing and cleaning of the White House between administrations is much more intense this time. They’re saying it’s because of covid. Sure. That’s why.

I just hope somebody took a real inventory. And don’t trust that hotel guy. Count after him.

Of course, even though the Trump’s will leave with stuff they don’t own, there is a positive aspect. They’re leaving. And even though they’re going to take stuff that’s not theirs, you bet there will be Trumpy stuff that’ll remain with us forever.

It’s going to take a long time to scrub all the orange funk off. But just in case, while the Trumps are leaving, check their pockets.