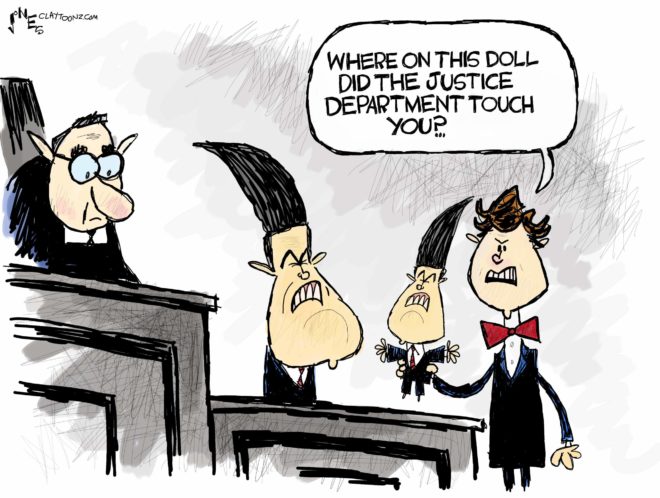 How did the Republican Party come to this? How did the party of Lincoln, Teddy Roosevelt, Ike, and Reagan become the party that defends terrorists and pedophiles? OK. “Accused” pedophiles.

In 2017, the Republican Party made Roy Moore their nominee for Jeff Session’s vacated Alabama Senate seat after several allegations were made that he was into surfing food courts in malls to pick up teenage girls. Now, the party with a huge faction that believes Hillary Clinton was operating a child-sex trafficking ring in a Washington, D.C. pizza joint has to decide if it wants to defend Congressman Matt Gaetz from accusations of…wait for it…sex trafficking. Funny enough, Gaetz once floated the idea of himself running for that Alabama Senate seat…thinking his district bordering Alabama makes him eligible. To be fair, a lot of people do believe the Florida panhandle to be an extension of Alabama.

So, what exactly is sex trafficking? In this case, it’s when a minor is transported for the purpose of sex. Say you live in Florida, and you pay to fly a minor in from Arizona to shag, that’s sex trafficking. Remember, these are only accusations so far in regard to Matt Gaetz, who has been accused of traveling with a 17-year-old girl across state lines and then having sex with her.

Gaetz recently flew to Wyoming (no word on if he took any 17-year-olds on that trip) to campaign against fellow Republican Liz Cheney because she exercised her conscience and independence and voted to impeach Donald Trump. Now maybe Liz Cheney should fly to Gaetz’s district and campaign against him. The only downside to that is that she would have to physically be in Gaetz’s Florida panhandle district. We could call it “Floribama,” or “Alaflora,” or “Aladuh,” or “Floppitbappity.” I’ll work on it.

Last year in the early stages of the coronavirus pandemic, he mocked the seriousness of the health concern by wearing a gas mask on the floor of the House. Later that week, one of the first people to die from the virus in this nation was in Gaetz’s Florida panhandle congressional district. “Flababama!” No?

Gaetz is a Trump sycophant. He supported the pardon of Roger Stone. He claimed Speaker Nancy Pelosi’s act of tearing up Trump’s State of the Union speech in 2020 was illegal. He tried to decertify the election Trump lost, helped Trump claim it was stolen from him, and supported the insurrection. Later, he voted against a measure condemning the coup in Myanmar, probably because he’s a big fan of coups. He’s also a big fan of conspiracy theories and uses the term “deep state” a lot. For example: “The deep state has accused me of rawdogging teenagers!”

A political ally of Gaetz was indicted on charges related to sex trafficking and that’s where this current investigation comes from. Someone may have thrown Gaetz under the bus. And from reading about how much people really dislike Matt Gaetz, that’s probably true. Gaetz claims it’s part of an extortion plot and the entire thing is politically motivated because nobody likes him. That is true. Nobody likes him. Gaetz brags that he doesn’t have a lot of friends in Washington and is proud that most of his true friends are in the Florida panhandle. “Bamafamu?”

This investigation was started last year in the final months of the Trump occupation of our government. William Barr was the Attorney General, who has to approve and be briefed on all investigations on members of Congress. This is not an attack by liberals or Democrats.

Gaetz says he’s being blackmailed by David McGee, a former official of the Justice Department. Gaetz claims McGee is blackmailing his father for $25 million to make sex-trafficking allegations go away. The problem here is, McGee has not been a member of the Justice Department in over two decades AND (this part is important) the inquiry into the sex-trafficking charges was BEFORE there was any so-called extortion attempts. There’s also the problem of: how do you blackmail Matt Gaetz by threatening you’ll make people think worse of him?

Gaetz claims the FBI was so concerned with this extortion attempt, that they had his father wear a wire which is a process that probably doesn’t work when the wire-wearer’s idiot son goes to the media and says his father’s wearing a wire.

While Gaetz is defending himself from these charges of sex with a minor, keep in mind he’s been living with an un-adopted male immigrant named Nestor since Nestor was 12 years old. Gaetz has referred to Nestor as his son, his helper, and a “local student.” Is Florida the only place where an unmarried grown man can live with an un-adopted 12-year-old?

While Gaetz has denied having sex with a 17-year-old, at least not since he was 17 (he said this), he openly brags about dating younger women and freely admits he’s paid for their flights and hotels to be with him.

According to The Daily Beast, Republicans don’t like him and there’s an informal rule not to appear on TV with him at any time for any reason. Why is this? Because Republicans who know Gaetz expect an incoming scandal with the dude at any time.

Again, according to the Beast, more than a half-dozen lawmakers have spoken to reporters about “his love of alcohol and illegal drugs, as well as his proclivity for younger women.” The article states, “It’s well-known among Republican lawmakers that Gaetz was dating a college student—one over the age of consent—in 2018. She came to Washington as an intern.”

A GOP staffer from Capitol Hill said, “I don’t think you’ll find a lot of people who are desperate to keep him involved in Republican politics.” One of those Republicans sent The Daily Beast a photo of a trash bin outside Gaetz’s office as lawmakers cleared out their offices at the end of a recent session. At the top of the heap was an empty “Costco-size” box of “Bareskin” Trojan condoms, extra small. Whoever gets that office after Gaetz may want to decontaminate it with a flamethrower. As Star-Lord in “Guardians of the Galaxy” would say, “If I had a black light, this place would look like a Jackson Pollock painting.”

In fact, only two Republican members of the House have publicly defended Gaetz so far. They are Jim Jordan, who’s another Trump sycophant and has been accused of being aware of sexual abuse among coaches and wrestlers when he was a coach at Ohio State University, and Marjorie Taylor Greene, the Qanon nut who is currently barred from any committee assignments. That’s not good company. Gaetz, like Jordan, Greene, and Lauren Boebert, don’t do any actual work as United States Representatives and only use their offices for higher profiles.

Even Tucker Carlson tried to distance himself from Matt Gaetz after giving him a platform to explain himself.

Matt Gaetz appeared on “Tucker Carlson Tonight” with a hair style that now has yard gnomes searching for a new look. Tucker’s show is one his own lawyers successfully argued in court can’t be believed by anyone “reasonable.” But still, more credible than Newsmax, where it’s been reported Gaetz has a job waiting if he chooses to leave Congress. That would be awesome for all of us because nobody watches Newsmax.

During the interview, Gaetz claimed innocence and said Tucker could appreciate his situation saying he was “not the only person on screen right now who’s been falsely accused of a terrible sex act.” Thanks to Matt Gaetz, Tucker had to go back over two decades to explain something he’s spent two decades trying to make fade away from everyone’s memories. Thanks a lot, buddy. Why didn’t Matt just claim all those extra-small “Bareskin” Trojans belonged to Tucker?

Then, Gaetz attempted to not just rope Tucker into his crap, but to make make him a witness. He said a female friend of his was threatened by the FBI and told “she could face trouble” if she didn’t confess to authorities that Gaetz was involved in a “pay-for-play scheme,” and that Tucker had met her. Gaetz said, “You and I went to dinner about two years ago. Your wife was there, and I brought a friend of mine, you’ll remember her.”

This is why you don’t go to dinner with Matt Gaetz. Or, at least one more reason.

Tucker quickly said that not only does he not remember this woman, but he doesn’t even remember the dinner. Thanks to Matt, Tucker’s next guests may be the FBI with subpoenas. After the interview, Tucker said, “That was one of the weirdest interviews I’ve ever conducted” and that it “didn’t clarify much.” Next time, interview a yard gnome. They don’t implicate you in sex-trafficking scandals.

According to some people at Fox News, Tucker was “pissed.”

Matt Gaetz has not been charged and is innocent until proven guilty. But Gaetz’s allegations of extortion could be true while the accusations of sex trafficking could also be true. One does not cancel out the other. Matt Gaetz, being a Republican and a Trump supporter, is probably not aware of that. This is a guy who believes if he screams “deep state” enough, it’ll make all the accusations disappear.

There are so many questions here. How bad are you when other Republicans don’t want anything to do with you? How horrible are you that even Tucker wants distance? How bad are you if your only true support is Donald Trump and Marjorie Taylor Greene? Is he guilty? Was there extortion? What does Nestor think of this? How small were those condoms? Where does one purchase a black light?

Also, in case you’ve never seen one, do NOT Google Jackson Pollock paintings.